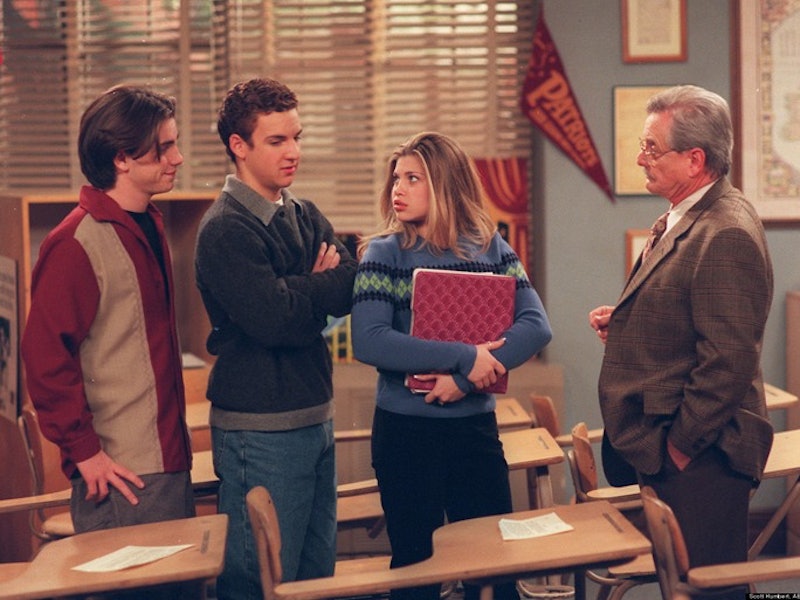 Of all the great fictional female role models I obsessed over growing up in the '90s, I can't think of any I adulated more than Danielle Fishel's character in the coming-of-age sitcom Boy Meets World. Rewatching the OG series now, it's easy to see why — there are feminist lessons we can all learn from Topanga Lawrence. In a decade that brought us strong fictional females like Beverly Hills 90210's brainy Andrea Zuckerman, self-sufficient sass-mouth Miranda Hobbes from Sex and the City and, yep, even that acerbic animated teen, Daria, Topanga Lawrence still stands out in my memory. And it wasn't just Topanga's perfect hair that made me want to be like her (although, admittedly, it played a part... seriously, just look at it!). Enviable locks aside, there were so many life lessons inherent in this character that made Topanga a feminist hero of my adolescence and, well, even now.

Long before Maggie Gyllenhaal nailed the need for actual women in television and film — women who are "sometimes powerful and sometimes not, sometimes sexy and sometimes not" — Topanga was bringing the nuances of a real, interesting woman to our screens. For seven blissful years (and now more, thanks to Girl Meets World ), she influenced our budding feminist tendencies. Yes, she was pretty. But, more importantly, she was smart, and funny, and complex — in short, a total feminist badass. How lucky were we to have had someone like her informing our adolescence? Here are a few life lessons courtesy of Topanga, the Master Yoda of '90s feminism, that still hold true today.

The daughter of two hippies, Topanga was never afraid to march to the beat of her own drum. Between drawing lipstick on her face to meditating mid-class, she never worried about what other people might think of her — she was always unabashedly herself. How refreshing is that? After all, as she told Cory when he was afraid Topanga's performance piece for a class project might draw ridicule from their classmates, "Every time you're not true to yourself, the earth weeps."

2. Every body is beautiful.

Could '90s girls have had a better body-positive role model than Topanga? Sure, there were moments when she briefly toyed with dieting, but for the most part she was self-assured and embraced her body as it was. In fact, as she reminded Cory and Shawn on more than one occasion, she found the act of judging people based on outward appearances to be "shallow and ignorant" anyway. Hear, hear!

3. You can be a damsel without being distressed.

As we all know, feminism doesn't mean feminine — it means equality. But that's not to say that a feminist can't be feminine, or that a feminist can't enjoy having a partner. Thanks to her lifelong love story with Cory, Topanga teaches us that you can be a damsel without being distressed. Wanting a man in your life doesn't make you any less feminist, especially when you're a woman as progressive and self-confident as Topanga. Case in point? When Cory meets a girl named Lauren and decided to go on a date with her to see how it might pan out. When he ultimately realizes Topanga is the only one for him, Topanga doesn't take him back right away. She loved Cory, yes... but she was also keenly aware that she deserved better.

4. Don't be afraid to call people on their BS.

Well, this kind of goes hand-in-hand with number three, doesn't it? Topanga was turning us '90s girls into feminists before we even knew what feminism really was, because she was never afraid to stand up to patriarchal iniquities. Like when she refused to participate in the Sadie Hawkins Dance, because she felt it pigeonholed girls into only being able to ask boys out for that one occasion and no other. Or the times she reprimanded Shawn and Cory for checking her out. Or, my personal favorite, when informed Cory, "That's destructive, gender-biased thinking, and we have to get beyond that." Uh, what she said!

5. Gender is not prohibitive.

Writing this article makes it impossible not to sit back and be grateful for TV writers who were willing to buck tradition and give the girls of our generation a female protagonist like Topanga. Because, real talk: This chick believed that gender norms were made to be broken. From the time she pinned Cory up against a locker in sixth grade to plant the couple's first kiss on him to the moment she proposed marriage, Topanga proved that gender isn't prohibitive — that women can just as easily go after what they want and rock in the roles society historically upholds for men. Remember when she dressed in a toga and presented her class project to Mr. Feeny? She created a futuristic society in which she was the President of the United States, nuclear weapons had been abolished, and men were kept underground only to be brought out for breeding. You know, there is an election just around the corner....

6. Some beauty standards need to be rebelled against.

Fashion and beauty in the '90s may now serve comedic fodder, but it was no laughing matter back then. It was a decade devoted to trendiness and fads like no other. Topanga didn't buy into that, though. Describing her futuristic society, she told Mr. Feeny, "We all wear togas now. It removes the hostile competition that fashion often creates."

Topanga never made any apologies for being smart. Rather, she embraced it — counting her A's and making jokes about needing to be there for Shawn and Cory 'cause they just weren't as clever. But perhaps the point Topanga clarified about smart girls that spoke to me the most was that are myriad ways to be smart. Intelligence doesn't fit in one formulaic box. So while some detractors claim that Topanga choosing Cory over Yale illustrated a lack of feminism and diminished intelligence, I counter that notion. I think it showed us that you don't have to make the decisions other people find smart to make the choices that are smart for you. Topanga was book smart, for sure, but when it came to relationships, she was equally brilliant.

8. Being with another person doesn't negate your identity.

Here's a lesson I hope to pass from Topanga on to my own daughter. While Cory and Topanga spent much of their formative years together and made the decision to be coupled forever, Topanga refused to lose her own identity to the relationship. Rather, she insisted that they each have their own lives and hobbies. How often do we, to this day, see our girlfriends began a shadow of their former selves when they begin dating someone new? How often have we been guilty of that over the years? We'd all do well to remember Topanga's words: "I do my thing, and you do your thing. You are you, and I am I. And if in the end we end up together, it's beautiful."