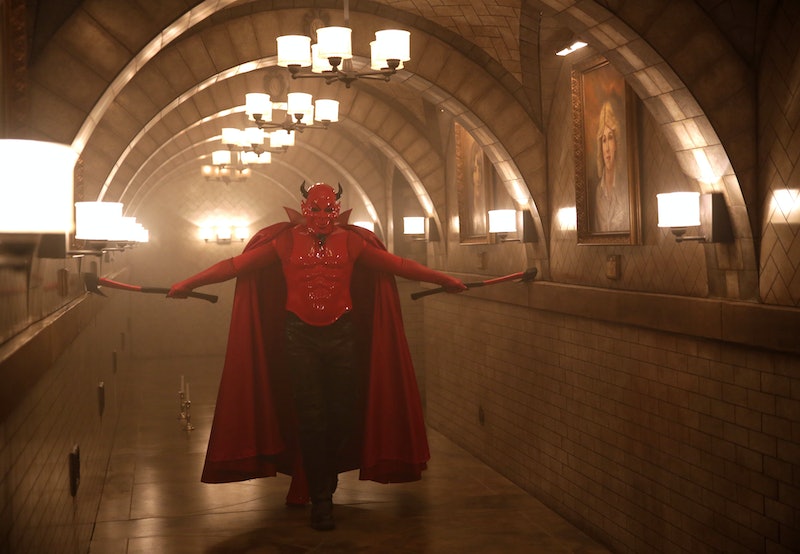 Ever since the series first made its grand debut back in September, viewers have become obsessed with conjuring up as many possible Scream Queens theories as they can think of. From the identity of the Red Devil (or Red Devils, plural, I should say) to the mysterious bathtub baby, our list of suspects on both accounts has reached an all-time high. And while some of the theories out there may seem a little too outlandish to take seriously, let's not forget what makes this show so special. Scream Queens prides itself in being campy, over-the-top, and all-out insane, which basically means no theory is considered too crazy to be off limits. Sorry, logic and reasoning, but there's just no place for you here at Kappa Kappa Tau.

So as a way to help commemorate the madness that is this show, I've decided to take the liberty of rounding up the most insanely awesome theories I could find about Scream Queens and list them out for all to see. Because, let's be honest here, even the most ridiculous and impossible ideas deserve to be heard. In fact, some of these are so crazy that they might actually be totally possible. When it comes to the mind of Ryan Murphy, anything is possible.

One Reddit user, andybent25, thinks that Chanel #5 and Boone are the Red Devil killers and secret twin children of Dean Munsch. (Thus making the bathtub baby nothing more than a red herring.) We know that the Dean hates this particular sorority, so maybe this was her way of infiltrating and destroying the Kappa House from the inside out.

2. Chanel #5 Is Much Older Than She Looks

The same Reddit user also predicted that Chanel #5 is one of the sorority girls from the '90s who went downstairs to dance to "Waterfalls" shortly after the bathtub baby's birth. "She sounds and looks a lot like Chanel #5. Maybe she has that disorder where she stopped aging (similar to that movie Orphan)." But the aging theory doesn't stop there. The user also believes that Boone is actually Chanel #5's son and the two of them are in on the killings together. #Cahoots

3. The Red Devils Are At Odds With Each Other

Reddit user mrahaf has a theory that Boone and Earl Grey are the Red Devils and are working for Gigi. But Earl's budding feelings toward Zayday are getting in the way of things, which means he could (ironically) become the next Red Devil target. "Gigi was telling Boone Red Devil that Earl Grey needs to go since he compromised them all at that point if he is the one that was trying to be romantic for Zayday." Looks like somebody might not be sticking to the Murder Club motto: chainsaws before chicks.

4. Gigi Is The Bathtub Baby's Mother

Meanwhile, Infinite wowbagger believes that Sophia (the sorority girl who gave birth to the bathtub baby) is actually still alive and going by the name of "Gigi." Yes, it's true we saw her body and she did indeed look dead. But again, logic and reason have no place on this show, people. (Maybe Sophia and Amy were even in on the death fake-out together since they were alone in that bathroom for awhile.) Plus, anyone who's ever watched an episode of AHS knows how much Ryan Murphy loves bringing his characters back from the dead.

5. The Opening Credits Give A Big Clue

Notice how Chanel #3 is in a bathtub? LittleKappaQueen thinks this could be an indication that she is, in fact, the bathtub baby. Sure, it may seem a little too on-the-nose to be true, but maybe that's what Murphy is banking on. The answer could be staring us in the face.