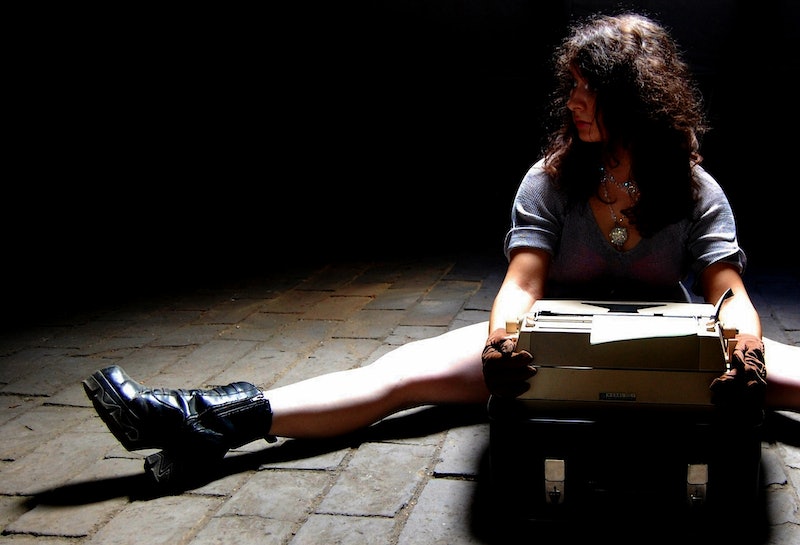 The first November after I finished graduate school, it seemed like everyone was completing their novels quickly but me. During that post-NaNoWriMo winter, one Facebook status after another declared that someone else had written a novel in 30 days; all but pointing a finger through the computer screen and directly at my face, shouting "neener-neener!" Now, I’m not generally one to begrudge another’s success, especially if we’re friends — and I really love to read, so if there weren’t people out there writing novels prolifically, then at some point I could be at risk of running out of material, which would be terrible. But still, all the cheerful statuses made me a little nervous. OK, a lot nervous. Nervous enough to throw in the literary towel completely and become something far less intimidating — like a bunny wrangler or a mime.

As I’ve written before, I’m a serious NaNoWriMo failure. And not only that, but I also haven’t managed to finish a novel in the whopping two years that have flown by since I was in graduate school. Nor a memoir, nor an essay collection. Nor any remotely publishable long-form manuscript about anything at all. My natural writing process is, in a word, slothy.

But as it turns out, a lot of other writers aren’t writing the 30-day-novel either — and some of them have still managed to achieve things like publication, acclaim, kudos from their mothers, livable incomes, and health insurance. Here are eight successful books that took years to write, so you can stop sweating your recurring NaNoWriMo failures once and for all, and just write at your own pace already.

Lord of the Rings by J.R.R. Tolkien

After publication of The Hobbit , it took J.R.R. Tolkien 12 years to complete its sequel, one of the bestselling novels of all time: Lord of the Rings . The novel, which follows the folly-filled antics of hobbits and elves as they travel across a land called Middle-earth, later became an award-winning fantasy film series. No matter how many years it took to write, I'm sure readers everywhere are happy to have Gandalf, Frodo Baggins, and Samwise Gamgee on their shelves.

It reportedly took journalist Margaret Mitchell 10 years to write and publish her staggering Civil War-era tome, Gone With the Wind. The novel, which tells the story of a once-privileged southern belle who loses everything after General Sherman burnt his way through Georgia, went on to win the Pulitzer Prize for Fiction in 1937, and became an Academy Award-winning film in 1940. This is the only novel Mitchell wrote in her lifetime, but I'd say she definitely made it count.

It took author Audrey Niffenegger over four years to write The Time Traveler's Wife (and another seven to complete Her Fearful Symmetry.) The author herself admits to being a slow writer. Her reason? Because writing is fun. You gotta love that. Here's a lady who's written these two gorgeous novels — one a romance that transcends both time and space, and another about identical twins who uncover some devastatingly complicated family secrets — taking all the time she wants to do so, and totally owning it.

The Brief, Wondrous Life of Oscar Wao by Junot Díaz

Author Junot Díaz has spoken often about the length of time it took him to write The Brief, Wondrous Life of Oscar Wao, including a hiatus during which he gave up on the novel completely and went to graduate school. Almost 10 years later the novel — which tells the story of a young Dominican-American boy named Oscar, who has great literary aspirations of his own — is a Pulitzer Prize winner. The moral of the story: don't give up writers.

The Cantos by Ezra Pound

Ezra Pound's The Cantos is a 120-section poem which explores the author's controversial opinions on government, economics, war, fascism, and a whole lot of other seemingly non-poetic topics. Pound also famously spent 57 years on the collection, which was still unfinished at the time of his death. So, you know, take your time, writers, but maybe 57 years is just a tad too many.

No Great Mischief by Alistair MacLeod

Author Alistair MacLeod's first novel, No Great Mischief, has been celebrated as a work of great literary skill and grace — and it also took MacLeod 13 years to complete the book. No Great Mischief is a Marquez-esque story of a family consumed by their history of conflict and violence, substance abuse and theft. Through it all, they remain painfully loyal to one another. The novel has received numerous awards and award nominations.

Michael Crichton spent eight years researching and writing Jurassic Park, the science fiction story of an amusement park of biologically manufactured dinosaurs who accidentally get loose and cause general chaos and mayhem. The bestselling title later became a science fiction series of both books and film — proving that every second Crichton spent on his beloved stories was well worth it.