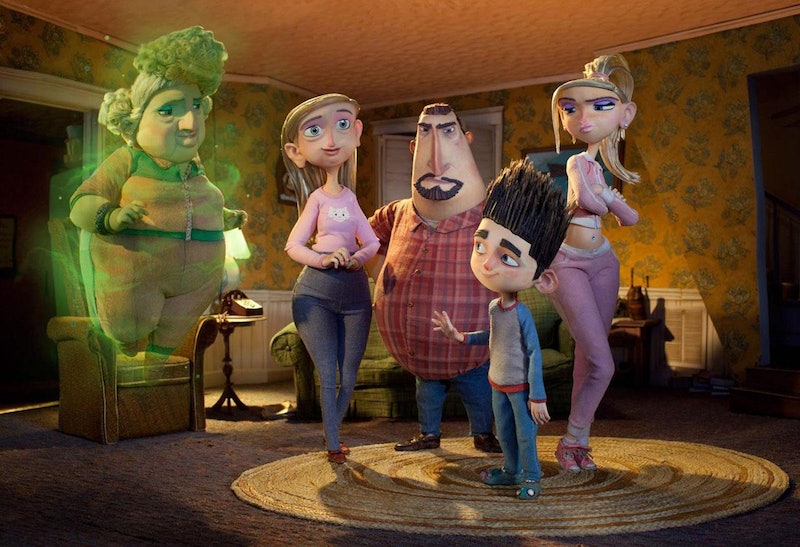 You may spend your Januarys through Septembers wading merrily along in a pragmatic denial of all things paranormal, but this time of year can really unearth those latent fears of the unknown. You might sleep with the lights on, flinch every time you hear the house settling, and ardently avoid the onslaught of Halloween-themed scary movies. And we get it — any effort to prevent insomnia, hair loss, or embarrassing public yelps of, “G-g-g-ghost!” is totally understandable. But this heightened apprehension doesn’t mean you should have to miss out on the holiday’s charms altogether. For instance, there are plenty of movies that’ll help celebrate All Hallows’ Eve’s macabre spirit without scaring the pants off you.

There are many films that wrangle ghosts, witches, zombies, monsters, and other dark characters and concepts into their stories without resorting to frightening their audiences. Some play up the paranormal for laughs, others for cheerful whimsy, and more still for great human drama. If you’re aching to celebrate October’s only good holiday through cinema but are too worried about bearing another sleepless night to pop in a classic like The Exorcist, Nightmare on Elm Street, or The Ring, then maybe check out one of these non-scary Halloween-appropriate movies.

1. The Secret of NIMH

Don Bluth’s Neverending Story-like adventure might have given you the shudders as a little kid, but should be perfectly conducive to your later-in-life yearning for something fantastical yet not too hard on the heart rate. Plus, the unparalleled beauty of Bluth’s classic animation style should be a riveting sight in today’s CGI-heavy era.

Ghouls, sorcerers, and Southern California might be horrifying notions across the board, but John Carpenter’s adventure flick plays them for plenty of fun. Kurt Russell’s journeys through the streets of L.A. filters the mystical underworld through that unmistakable dark camp of the 1980s, yielding a paranormal thrill ride perfect for Halloween viewing.

An even lighter romp, and with plenty of netherworld iconography to justify Halloween season viewing. And, for all its ghoulish imagery, the only thing scary about Ghostbusters is how averse some folks on Twitter are to a female-led remake.

Take your pick: Beetlejuice, Edward Scissorhands, or the Burton-produced The Nightmare Before Christmas all tamper in the ghoulish without veering too far into horror. Some people might argue that the latter picture, directed by Henry Selick, is “only for Christmastime viewing,” but Halloween is just as apt a time to reunite with your old pal Jack Skellington. And, hey, Burton’s Sweeney Todd and Corpse Bride aren’t bad choices either. While we’re on the subject…

Laika’s best production to date, the animated zombie film does admittedly boast a handful of jump scares. But the indomitably sweet-natured ParaNorman isn’t as interested in haunting as it is in delighting. Even the most skittish of viewers will walk away from this one with a warm feeling.

Though you might not categorize The Fly as a traditional horror flick, the seminal David Cronenberg picture does have its share — and then some — of disturbing images and ideas. If you’re especially sensitive to “body horror,” you might want to avoid this one. However, The Fly’s principal concern is the dramatic story between Jeff Goldblum and Geena Davis, whose chemistry rivals anything from mainstream romantic cinema.

Okay, you’re turned on by the notion of romance, but The Fly is a little too hardcore for your tastes. Well, the Righteous Brothers-scored drama that forever changed the nature of homemade pottery should do the trick.

8. Close Encounters of the Third Kind

If you want just as much dramatic merit without any of the gross-out fare, you may look to that old reliable source of big screen magic: Steven Spielberg. Leave it to Spielberg to render what might otherwise have become a standard horror flick into one of cinema’s most powerful stories about family, identity, and faith. Richard Dreyfuss’ tireless pursuit of the unidentified beings that only he believes to be real makes for a magical, albeit often grave, embrace of the mysterious and the unknown — just what you need to tear you from your aversions to those things.

This little seen horror movie spoof, while dense with graphic content, is a pretty lightweight farce. What’s more, it’s surprisingly sweet at times… even when hordes of teenagers meet with gruesome fates. All in all, there’s little to fear, and a good deal to chuckle at, here.

If Pan’s Labyrinth and Crimson Peak weigh too heavy on the ghastly for your tastes, director Guillermo del Toro’s more upbeat and comical Hellboy films might align better with your sensibilities (without skimping on the phantasmal critters).

Around this time of year, you likely feel beheld to the masterful Stephen King; you want to pay respects to the greatest horror novelist of the 20th century, and to the many brave filmmakers who deigned to translate his stories to the big screen. The only problem is that most of them will scare the bejeezus out of you. The Shining? Cujo? It? Well, how about the Rob Reiner-directed coming-of-age story Stand by Me? It’s got a dead body, so it doesn’t even feel like that much of a cheat.

Yes, Drew Goddard and Joss Whedon’s 2012 picture can be definitively scary at times, but it is also triumphantly fun. So much so, in fact, that the “good vibes” you’ll garner from watching the genre savvy pair tear into the horror movie game should drown out any anxieties that images of scary ballerinas or murderous unicorns might produce.

One of the funniest movies ever made, and perhaps the greatest movie parody in cinema history. Mel Brooks’ classic comedy is best watched on Halloween, when reverence for the Frankenstein lore is at its height. That’s when irreverence is most needed.

See? You can still celebrate the holiday to which October is largely devoted without having nightmares every night between the start of the month and the end of it. It's just a matter of getting creative in your definition of the phrase "Halloween movie."

More like this
What’s New On Netflix: A Victoria Justice Rom-Com & The Return Of David Letterman
By Arya Roshanian
You Can Thank 'Spider-Man' For The Meme-ification Of Movies
By Dana Schwartz
'Stranger Things' Star Joe Keery Is Dating An "Indie Scream Queen"
By S. Atkinson and Grace Wehniainen
Everything To Know About Marvel’s 'Thor: Love And Thunder'
By Grace Wehniainen
Get Even More From Bustle — Sign Up For The Newsletter