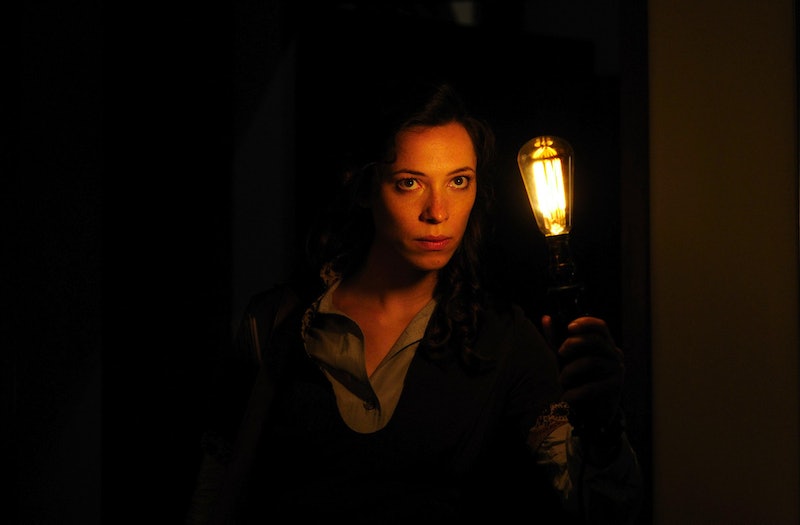 Horror movies just may be the most overdone of any film genre. There is an obscene amount of horror flicks out there, and most of them aren't very good. They're notoriously cheap to make, which too often leads to poor acting, an over-reliance on gore, predictable plots, and recycled ideas. I'd say there's very little about most horror movies that is scary at all, especially when so many of them spawn endless sequels offering up more or less the exact same "thrills" each time (case in point: There are 12 Friday the 13th films). But not all horror movies are bad, of course. Once in a while you'll come across one that gets the formula right and ends up causing you serious distress. Given that it's October and Halloween is right around the corner, you'll be wanting to find the best scary films out there, and thankfully, Netflix has horror movies that are some of the genre's very best.

The greatest horror movies are those that don't depend on jump scares or gore to frighten you. Instead, they burrow inside you to find what you're most afraid of and stay there, building over the course of the film until you have no choice but to sleep with the lights on. The following 11 movies all accomplish this to some degree, and they all come with loads of critical acclaim to boot.

This movie is an especially creepy tale about a young boy who finds a very disturbing children's book about an evil spirit called the Babadook. After the boy's mother reads him the book as a bedtime story, strange things start happening around the house. The boy blames the Babadook, and the mother has to come to terms with the reality of what she's up against. Widely considered one of the best horror films in years, this film knows how to scare you.

One of the most classic horror movies of all time, this film is about a young woman who becomes pregnant after a horrific dream in which she's raped by a demon. When the pregnancy doesn't exactly go as planned, she begins to suspect that her husband has made a pact with their witch-like elderly neighbors to plant the seed of Satan inside her. You won't look at your significant other the same after watching.

Who would have thought comedian Mark Duplass could be so... creepy ? He stars as Josef in this "found footage" film as a man who lists a Craigslist ad looking for someone to document his life for his unborn son since he's suffering from a terminal illness. The protagonist heads out to meet Josef at a secluded cabin in the woods to begin the project, and it doesn't take long for Josef to start acting very weird. This film takes the idea of being isolated with a stranger and makes that stranger the worst person possible. You may never peruse Craigslist again.

What if Rosemary's Baby grew up? That's more or less the gist of this 1976 classic, in which a well-to-do couple adopt a son who ends up being the antichrist. This movie perfected the creepy kid trope, and will send you running in the other direction should you ever meet a little boy named "Damien" in real life.

Scream somehow manages to parody horror films while actually being scary itself. The feeling that someone is watching you while home alone is a frightening aspect; as is the idea that someone you know is a serial killer. Scream depicts both of these ideas wonderfully, and will leave you questioning your friends.

Haunted houses are scary, and this movie nails the atmosphere of them perfectly. Nicole Kidman is a single mother with two small children who moves into a rural home, but there are already some occupants who don't want her family there. Kidman even earned a Golden Globe nomination for her role, a rare honor for a horror film.

For anyone who grew up Catholic like I did, there's probably a special place in your heart that's still terrified of Hell. This movie depicts a portal to a Hell-like dimension being opened in a home; one that's populated by hideous demons called Cenobites. Just the thought of an eternity of being tortured by these creatures might be enough to send you into the pews of your nearest church.

You know the story: Boy meets girl, falls in love, girl turns out to be a vampire. In this 2011 Swedish film, which won the Saturn Award for Best International Film, the young boy and girl continue their courtship in spite of her horrible tendencies. Genuinely eerie on a number of levels.

Another genre-bending vampire flick. This film from last year, which is stylishly filmed in black and white and spoken entirely in Farsi, is about a female vampire stalking a small Iranian town. This movie will literally make you forget you're watching a horror movie because of its unpredictability, while at the same time scaring you as it taps in to various themes of folklore, loneliness, and sexuality.

Rebecca Hall stars as a paranormal debunker in early twentieth century England who's sent to investigate supposed hauntings at an all-boys boarding school. This is the type of film that gives you an uneasy feeling throughout, as you truly feel like you're investing the premises along with the protagonist — and may run into a ghost at any moment.

Is there anything scarier than family? OK, most people's families aren't really scary, just annoying, but this one that kills and eats young women as some type of weird religious ritual most definitely is scary. Especially when, after the death of their mother, the two female protagonists are expected by their murderous father to carry on the family tradition in her place.

Netflix obviously has a lot more scares if you're willing to look for them, but these are the cream of the crop. These movies will all frighten and disturb you, so you may regret watching them. But it won't be because they're bad movies — just terrifying ones.

More like this
15 Romantic Movies On Netflix That Are Perfect For Snuggling Up On The Couch
By Rachel Simon and Grace Wehniainen
15 Intriguing Movies On Netflix That Are Based On True Events
By Mary Kate McGrath, Shannon Barbour and Grace Wehniainen
What’s New On Netflix: The Return Of 'The Umbrella Academy'
By Arya Roshanian
What’s New On Netflix: J.Lo’s Documentary & A Melissa McCarthy Series
By Arya Roshanian
Get Even More From Bustle — Sign Up For The Newsletter