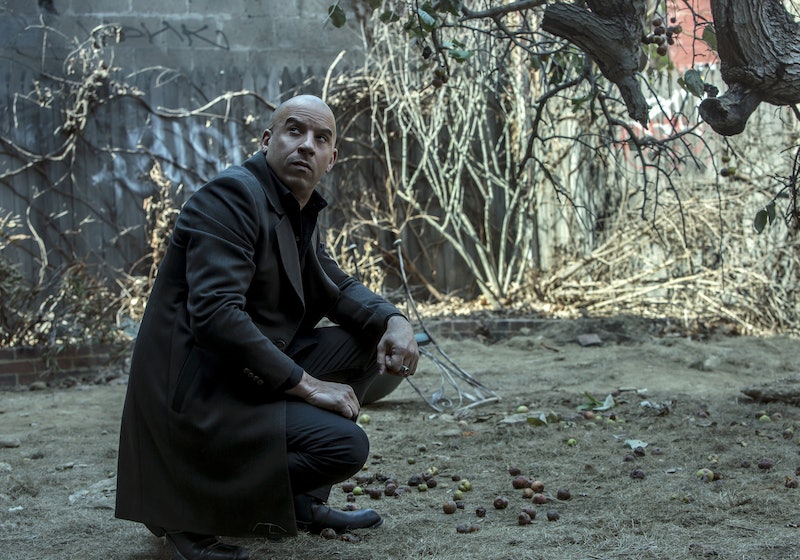 Maybe it's because I grew up on Sabrina and Hocus Pocus, but I've always assumed that witches are pretty cool and only sometimes murder-y. But Vin Diesel and his newest character Kaulder don't agree with me; The Last Witch Hunter is about exactly what it sounds like. In this movie, the immortal Kaulder is a member of a society called "The Axe & Cross," who are on an eternal mission to stamp out supernatural threats. In particular, Kaulder is out to stop a coven of witches from starting a world-ravaging plague. But so many other kinds of threats could be dreamed up for future chapters — will there be a Last Witch Hunter sequel featuring Kaulder taking on even more craziness?

This first film is being released in U.S. theaters on Oct. 23, so there are no box office numbers to point to yet. Still, Deadline reported in early 2014 that Lionsgate was hoping for The Last Witch Hunter to develop into a franchise. In June, Vin Diesel shared a production still from the film on his official Facebook page with more encouraging news. "So, the studio apparently is so excited by The Last Witch Hunter...that they are already commencing on the next one," he wrote. "The first one doesn't hit theaters until Oct. 23, yet they want me to commit and already block out time to film it."

Barring a faceplant at the box office, it looks likely that The Last Witch Hunter won't be the final movie in this prospective series. And why should it be when Vin Diesel's character can never die? Here are a few more immortal characters who, in theory, can make their movie comebacks any time.

Okay, so all the Cullens are immortal. But Bella is the newest member of this makeshift vampire family, and I get the feeling that she's going to get the most out of living forever. Fans are still waiting on a continuation of that story, with only Stephenie Meyer's gender-flipped rewrite to tide them over.

Three movies have already been devoted to a half-vampire who hunts vampires. 3/4 of the guys I knew in college had this poster on their dorm room wall, and I'm sure every one of them would be lined up for another sequel.

The superhero comedy ended with Will Smith's reformed slob of a crusader having a kid who shares his powers, so: Hancock & Son, anybody?

Reading the story of young Winnie Foster and her relationship with the mysterious Tuck family is a preteen right of passage. The 2002 Disney adaptation of the novel captured its dreamy sorrow, and it wouldn't be the worst sacrilege if someone picked up the plot and showed me where Jesse Tuck is right now.

When characters never die, stories don't have to either. Vin Diesel is excited about returning to play Kaulder in a Last Witch-Hunter sequel; maybe audiences will be clamoring for it, too.

More like this
Who Are The 6 Illuminati Heroes in 'Doctor Strange 2'?
By Grace Wehniainen
Elizabeth Olsen's Chris Evans Friendship Update Was Accidentally Hilarious
By Grace Wehniainen
Wait, Did Wanda Die In 'Doctor Strange And The Multiverse Of Madness'?
By Arya Roshanian
Hayden Panettiere Will Return For 'Scream 6': "We F*cking Won, Scream Fam"
By Jack Irvin and Jake Viswanath
Get Even More From Bustle — Sign Up For The Newsletter