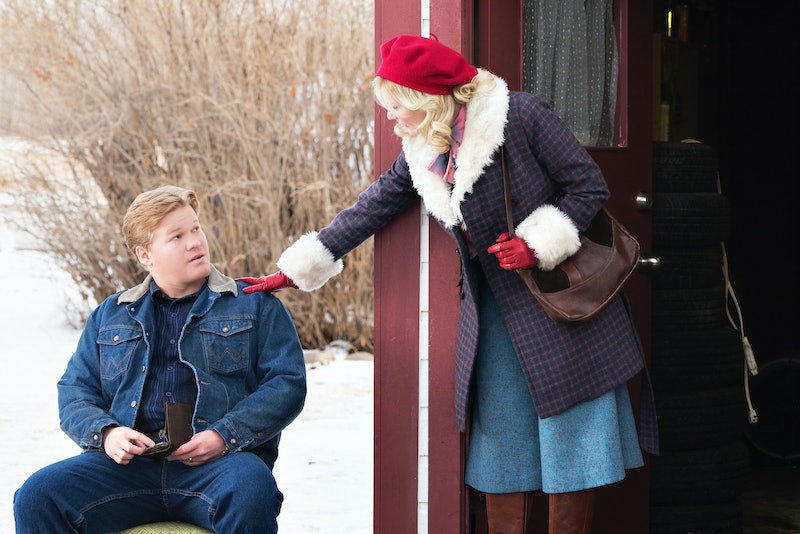 In the midst of the warring crime syndicates and the triple-homicide investigation, Peggy and Ed Blomquist are truly the wild cards of Fargo Season 2. State Trooper Lou Solverson can't quite seem to crack the baffling case of the Waffle Hut murders... and with good reason. How did the murderer seemingly disappear into thin air, leaving his gun in the snow and his shoe in a tree? No, it wasn't the UFO that happened to be whizzing by that night — although it might as well have been, given that the hit-and-run that lassoed the Blomquists into the bloody mess was as random a deus ex machina as that flying saucer.

Nobody could have predicted that Peggy's little sedan would have come along at just that particular moment, sending Rye Gerhardt careening through its windshield; the fact that it did throws quite the monkey wrench into Lou's investigation. Furthermore, Peggy and Ed's decision to cover up her hit-and-run and his murder of Rye ensures that this state of confusion will persist for at least the foreseeable future. Except, given the absurd way the naïve couple was acting in the season's second episode, "Before The Law," that might not be for as long as they think.

Ed is by far the worse off of the pair, since he's the one stuck with disposing of Rye's frozen corpsicle and all. His idea of being inconspicuous is sitting outside of his garage with the door open and a smashed-up car in plain view. Oh, Ed. He calls in sick to the butcher's shop (with Peggy blaming his absence on bad oysters) and spends the day scrubbing blood off the floor. Once the butcher's shop is all closed up for the evening, he drags Rye into the back, chops him up, and proceeds to feed his limbs through the meat grinder. Very Fargo-the-movie meets Sweeney Todd.

The trouble begins when Lou stops by to pick up some bacon for his cancer-stricken wife. Ed COULD NOT POSSIBLY act more suspicious, taking a super long time to answer innocuous questions, leaving Rye's decapitated head out on the table where Lou could see it if he simply looked, and almost losing it when he notices a stray finger on the floor. Really, it's amazing Lou didn't arrest him on the spot. Somehow, the trooper got out the door with the bacon without noticing anything suspicious, which is a turn of events as miraculous as the aforementioned unidentified flying object.

Ed's day may have been more grisly and nigh-on disastrous, but Peggy's wasn't exactly a walk in the park, either. Viewers got to see inside the beauty parlor where she works for the first time, and we met her boss, who's name is — I kid you not — Constance Heck. As in, "Heck, Constance sure is hitting on her married employee awfully blatantly." Turns out Constance is the one who introduced Peggy to the idea of the seminar she's so keen on attending, although it's now clear that the seminar is only a thinly-veiled excuse so Constance can get Peggy alone in a hotel room. This can't be going anywhere good.

But the trouble for Peggy really starts when Constance drives her home, and we learn that the Midwestern wife is something of a kleptomaniac, having hoarded the beauty parlor's entire supply of toilet paper (or "TP") under her bathroom sink. Naturally, this discovery only turns Constance on even more. "You're kind of a bad girl, aren't you?" she croons. (You have no idea, Connie.) But it's the sight of Peggy's smashed windshield — and Peggy's conflicting stories of how it happened — that really gets Constance's attention. She may think that's merely a symptom of Peggy's heretofore hidden wild side, but as soon as Constance gets wind of a hit-and-run, she's bound to put two-and-two together, right?

It's too bad, really, that Ed's hard work turning Rye into human sausage links might be all for naught. If he and Peggy can't get their act together — and soon — they'll be headed for prison faster than you can say "aw geez." Of course, the couple is bound to be drawn into the central conflict of the season at some point, but at this rate it'll definitely be on the sooner side of later.

More like this
Will Vampire In The Garden Get A Season 2? What To Know
By Kadin Burnett
'Bridgerton' Star Nicola Coughlan Confirms Season 3 Will Focus On Colin & Penelope
By Grace Wehniainen and Alyssa Lapid
'Bridgerton' Season 4 Will Likely Focus On This Brother's Divided Heart
By Grace Wehniainen and Alyssa Lapid
What’s New On Netflix: A Victoria Justice Rom-Com & The Return Of David Letterman
By Arya Roshanian
Get Even More From Bustle — Sign Up For The Newsletter