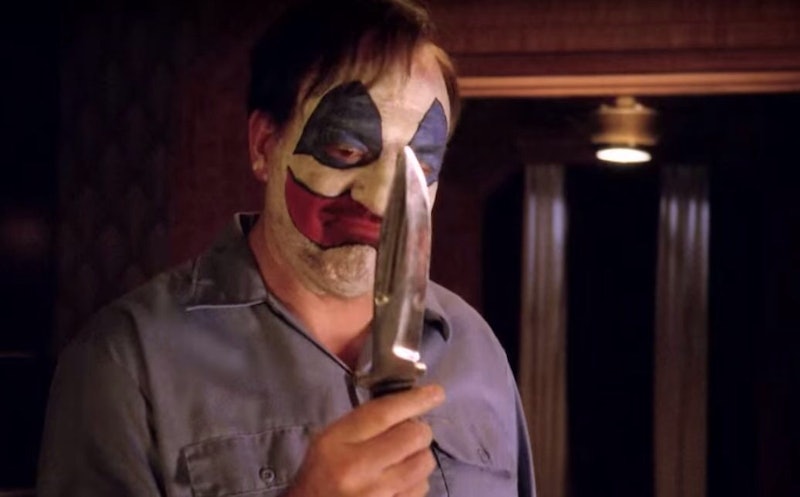 Ryan Murphy has really taken things to a new level this season on American Horror Story: Hotel. Real life, nightmarish inspirations have already shown up in Lady Gaga and Evan Peters' character and lucky for us, there's plenty more being teased for the rest of the season. Recently there's been rumors that real life serial killer, John Wayne Gacy will be on AHS: Hotel. So, who is John Wayne Gacy? Well, not a good guy, that's for sure.

John Wayne Gacy is one of the most infamous, and truly evil serial killers in American history and as you will likely see on the show, his crimes are something straight out of your nightmares. Honestly, his dubious deeds really do belong snuggled into the macabre world of American Horror Story, so he should fit in nicely with the rest of the inhabitants of the Hotel Cortez. With a violent thirst for torture/death and an alter ego known as Pogo The Clown, you would be hard pressed to think up a fictional character that could come close to surpassing his actual loathsome acts.

At the end of his long and sordid career of murder and mayhem, Gacy was found guilty of murdering 33 boys and teenagers. Most of these unfortunate victims were found buried in a crawl space under Gacy's home. There were so many bodies that even today, all of them are not identified. His methods of torture and murder are truly heinous and very disturbing. Read on if you have the stomach, but don't say I didn't warn you.

Unfortunately Gacy started his violent decent early with a string of sexual assaults against young boys. He was convicted and sentenced to a 10-year prison term for one incident involving two teen boys, but was released on parole in 1970 after serving only two years. He struck again the year following his release but escaped conviction when his victim failed to appear in court. Soon these heinous acts weren't satisfying Gacy's needs, so he moved on to murder.

To really understand the terrifying monster that John Wayne Gacy was, you need to know another facet to his crooked personality. He worked as a clown, named Pogo that entertained kids at hospitals and birthday parties. Yup. He was an actual clown and he looked like this:

In 1972, Gacy began a spree of brutal murders that would last until 1978 when he was finally caught. Most of his victims were lured with promises of construction work or sexual liaisons. Once in his clutches, Gacy would use his clown skills to convince his victims that he was going to show them "the handcuff trick" straight out of his Pogo toolbox. Once he had them unaware and in the handcuffs, the horror began. Strangulation, sexual assault and a wheel of torture (where you would be strapped and manhandled) were all methods used by Gacy to slowly end his unfortunate victims' lives.

Although his reign of terror lasted only about six years, he racked up an impressive body count. When he was finally caught, he was sentenced to 21 life sentences and 12 death sentences. He was executed in 1994 with his last words being, "Kiss my ass."

With a rap sheet like that, who better to join those at the Hotel Cortez? It's shaping up to be a very sinister season.