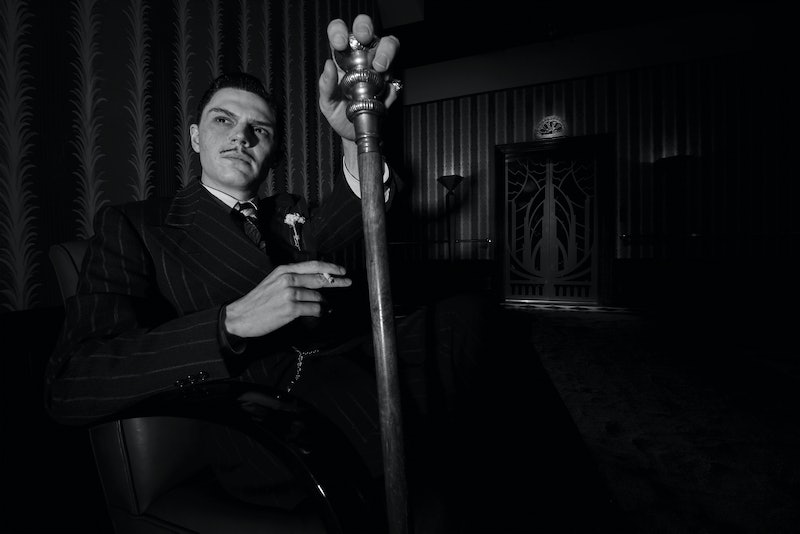 For five years running, FX's anthology series American Horror Story has been stuffed to the gills with horror movies references. Season 5's Hotel in particular seems to be paying homage to the likes of The Shining and The Hunger, with its combination of haunted hotel and vampire storylines. But the inclusion of a serial killer selecting his victims through a biblical process is ripped straight from David Fincher's Se7en. Detective John Lowe is on the path of the Ten Commandments Killer, and the Hotel Cortez is offering plenty of suspects, each more likely than the last to be revealed as the sadist murdering people based on Moses' holy tablets. But there's one who looks extra guilty: the mustachioed hotelier played by AHS mainstay Evan Peters. Is Mr. March the Ten Commandments Killer?

The easy answer is, of course, yes. We learned in the expository flashback narrated by Iris that March was a serial killer himself, modeled after real-life murderer H.H. Holmes. At one point in his killing spree, March vowed to one of his victims that he would kill God himself; as such, he threw out all of the hotel's Bibles and murdered a bunch of migrant workers who dared to perform manual labor on the Sabbath day (violating Commandment #4).

But that was in 1924. In the present day, these Ten Commandment-themed killings have continued. So far, John Lowe has investigated three murder tableaus depicting false idols, adultery, and honoring thy father and thy mother. (It will be interesting to see how the killer handles Commandment #6: "Thou shalt not kill.") So did Mr. March at some point become infected with the same virus that afflicts The Countess, prolonging his life and allowing his killing spree to continue into the 21st century?

Actually, no. We also learned last week that Mr. March killed himself (and loyal laundress Ms. Evers) when he was about to be apprehended by the police. And since Hotel so far seems to be following the same rules as Murder House, his soul is likely trapped within the physical confines of the Cotez, like Hypodermic Sally — which means he couldn't possibly have ventured outside to commit those three murders John Lowe is investigating.

However, just because Mr. March might not have committed those murders himself doesn't necessarily mean he wasn't involved in any way. In the character's first appearance this season, his ghost interacted with Tristan Duffy, attempting to get the petulant male model to murder an innocent young woman. (When Tristan refused, March shot her himself.) It seems like the hotelier now spends his afterlife trying to recruit people to his war against God — which means that whoever is continuing the work of the Ten Commandments Killer was probably recruited to the task by Mr. March personally.

So who is it? There's not enough evidence yet to make a solid guess in any one direction — but I have a tantalizing theory. Perhaps the Ten Commandments murders aren't actually committed by one prolific serial killer; rather, it might turn out that each individual murder was committed by a different person March had recruited to his cause... leading to a Murder On The Orient Express-type ending where it turns out that EVERYONE did it. (Honestly, I'm expecting a similar ending from Murphy's other anthology horror show, Scream Queens , on which it will be revealed that literally every main character donned the Red Devil costume and killed someone at one point or other throughout the season.)

Another possibility is that Mr. March's connection to the current Ten Commandments Killer is a red herring — and the real killer is operating completely independently. Given that Season 5 and Season 1 are directly linked through location, time period, and Marcy the realtor, it's possible that the murderer could turn out to be a character from Murder House. And who would want to wage a war on God more than Vivien Harmon's son... the literal Antichrist? (Of course, little Michael Harmon would still be a toddler in this time period — unless his supernatural origin allowed him to grow at an accelerated rate.)

The press release for Episode 7, "Flicker," promises that, "Will Drake's renovations uncover one of the Hotel's greatest secrets." We may have to wait until then to learn more about the identity of the Ten Commandments Killer — but we'll sure have fun making wild guesses in the meantime.