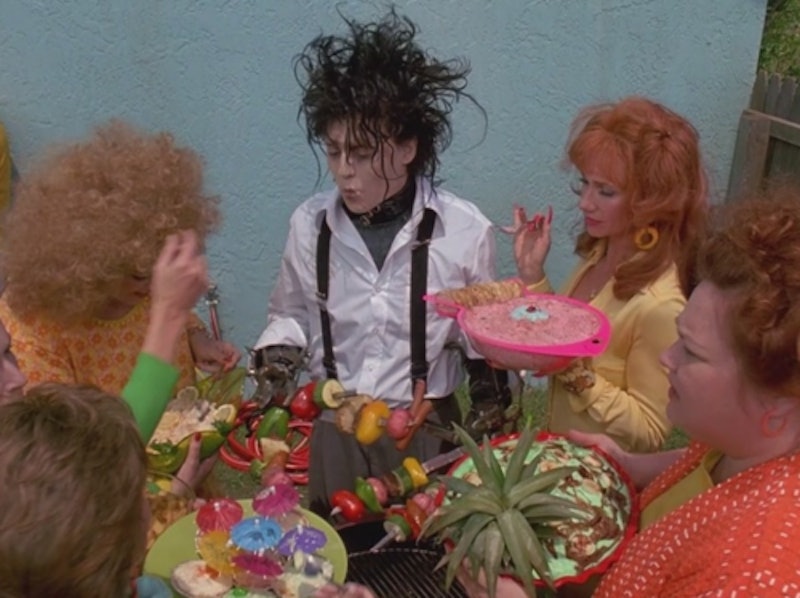 It is no secret that I'm a zealot when it comes to Tim Burton films, having basically spending much of middle school in striped tights and Hot Topics. All the posers tend to come out every October, and while that makes me skeptic, I also get how the season highlights Burton's trademark spookiness. It's why at all the Halloween shindigs this year you're bound to see Burton inspired Halloween costumes. But I have to wonder... in real life, which Burton character would make for the best Halloween date? Actually, if we want to condense it, which Burton Johnny Depp character would make the best Halloween party date?

See, realistically speaking, Beetlejuice would be a blast to party with, and who else knows how to celebrate Halloween like the Pumpkin King Jack Skellington? There are a lot of characters that would be great to bob apples with. But Burton and Depp are the ultimate union since, well, Burton and Helena Bonham Carter. So interest of time, it just makes sense to keep it concise and keep it within the Depp characters.

So with all things considered, here is a brief ranking of Depp characters, judged by how great of a Halloween companion they would make.

You know what, if you're just going to be all mopey and then slit a bunch of throats in the back room, just wait in the car.

It's not that he can't party. In fact, he can even book Alice Cooper for you at your next shindig, and normally that make for a great companion. But ugh, not even Alice Cooper could keep me awake for Dark Shadows, and that doesn't bode well for Barnabas. He's like some trust-fund modern dandy Prince of Williamsburg type: all flair, no actual personality.

I mean, he's cute and all, but definitely that guy who's going to come to the party and spout a bunch of conspiracy theories.

Ok, of all the Depps present in this list Victor, the claymation pick, is the one that most closely resembles my boyfriends. Just sad commentary on how pale and malnourished I like my men. That said, he is paaaaainfully shy, and unless you're partying with the literal dead, maybe not emotionally equipped for a crazy Halloween rager. I understand, bb, I'm the same way.

4. The Mad Hatter From Alice in Wonderland

As a character, I feel decidedly "meh" about The Mad Hatter and all (yes, all) takes on Alice in Wonderland. Never bought into it, Wizard of Oz is the better story. However, I will go on the record saying that The Mad Hatter knows how to throw a baller tea party and would be super fun to take as a party date. It's just that "absolutely bonkers" thing that makes me wary for a more long-term commitment. You can do two hours max, and then it gets exhausting.

3. Willy Wonka From Charlie and the Chocolate Factory

Willy Wonka is definitely your weirdest, most reclusive boyfriend. Pro: he's totally down to talk shit and almost definitely has the best candy ("candy"). Con: he's annoyed by basically everyone is really passive aggressive about showing it. Actually, I don't necessarily see that as a con, but I can get how other people would.

Now, this is my favorite Depp of all time, so I'm biased, but hear me out. Despite his natural shyness, how awkwardly he handles his welcome-to-the-neighborhood barbecue, and that whole scissorhands thing, Edward is a WONDERFUL companion. Everybody will be impressed by his "costume," he knows some amazing party tricks, and he's just so gosh-darn cute. You'd have to keep an eye on him the entire night, but I would love to have him around.

Disclaimer: Wood was actually a real-life person versus an original character or re-appropriated, creepified character. This makes his place in the list definitely amusing. But based on Burton's film and general knowledge of the worst director ever, he totally knew how to party... and would throw a killer Halloween shin-dig. He has the most eccentric entourage, an incredible love and respect for the macabre, and he'll do a belly dance for your friends in an angora sweater. If you're down with that, then you'd definitely be down to party with dear Eddie.