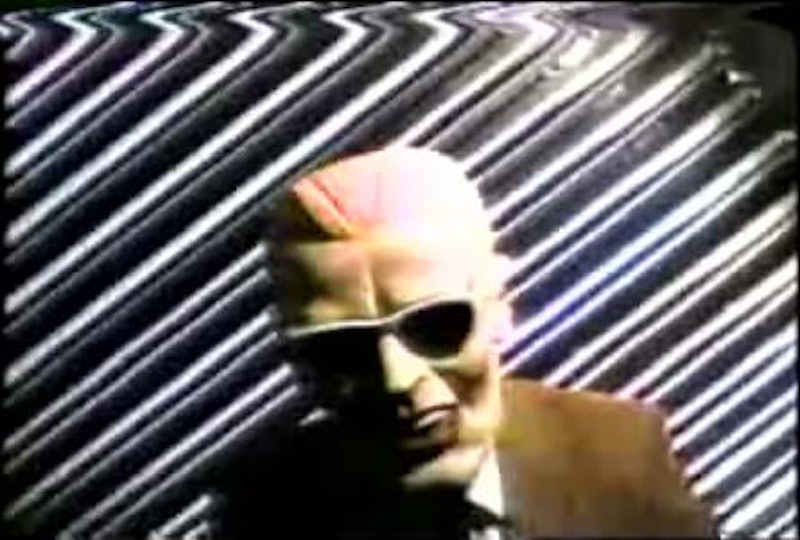 Is it really Halloween season without a creepy new unexplained video of mysterious origin bouncing around the internet? I say no, and as a certified Doctor of Halloween Studies (yes, I got my certification at the Halloween store at the mall, but I think it still counts), my opinion here matters. The newest spooky video to entrance the internet comes from the same place that all your favorite things, like Ikea and Robyn, hail from — Sweden! The blog GadgetZZ claims to have received a DVD of the spooky video below in the mail, which is a very quaint way to transmit demonic messages, if you think about it.

The mysterious video — which features a guy in a Black Plague doctor's outfit vogueing all over a creepy, decaying building, while shrill robotic noise plays in the background — has naturally become a hot topic of internet debate. What does it mean? Hey, I'm a doctor of Halloween Studies, not a doctor of Poorly Lit Horror Video Studies; I don't have the answers, man. And neither does the internet — though amateur internet detectives have detected some weird hidden images made visible by analyzing the sound, including a skull and an image of violence. Is this video an actual threat from a dangerous individual? Is it a prank being played on the blog's owner? Is it viral marketing for some new video game or particularly edgy processed cheese snack? Is it a high school video class project that just got way out of hand, possibly after the creator spent a long weekend chugging energy drinks and watching Seven?These are just a handful of the many questions you must grapple with when you immerse yourself into the world of creepy internet videos.

But first, check out the video sent to the Swedish blog below. The soundtrack is quite loud and some people might find the images on it unnerving, so please exercise caution before watching, milady:

As any fan of internet weirdness knows, most freaky "unexplained" videos are debunked in a matter of days, and are typically revealed to be the work of someone with a deft hand at PhotoShop and/ or a Bigfoot costume that they have on loan for three more days before they have to give it back to their cousin Todd. But sometimes, a video genuinely freaks us out and confounds the internet, leaving us with questions in place of our usual smug answers. And honestly, isn't the Halloween season about trading our smug answers for child-like wonder and also maybe some terror? It's better than candy corn, if you ask me.

So with all that in mind, here are three video mysteries that the internet has yet to crack.

You may only be familiar with the idea of the deep web through the many news reports about it (most of which make it sound like a place that exists solely for people to connect with strangers who want to help them commit acts of organized crime). But there's much more to it than all the think pieces and crime procedural TV shows might have led you to believe.

All kinds of things exist in the password-protected depths of the deep web — including disturbing video games, like the mysterious "Sad Satan," which was supposedly found on a deep web forum. A user of that forum found it and sent it to Jamie Farrell, of the "Obscure Horror Corner" YouTube channel. Farrell uploaded some videos of the disturbing survival horror game, which involves long walks down darkened hallways, garbled-sounding backwards voices and a photo of a guy wearing deer antlers. Then, after claiming that the video was installing programs on his computer without his permission, Farrell deleted the game file...and no one has been able to find the actual game since.

If you made it to the end of the above video, you're probably wondering: what the hell was that? And that answer is: no one really knows. Some say the dark, purposely primitive game is about child abuse; some say it is about actual literal Satan. But since no one has been able to track down the game's actual creator, all we can do is keep guessing (and watching the video whenever we're like "Hmmm, my day has been too happy and un-upsetting! Wonder what I can do about that?").

The YouTube channel Unfavorable Semicircle spent about three months uploading dozens upon dozens of five second videos of a dot on a solid background, accompanied by a robot-y voice saying...something. Each video is titled with a seemingly random number and the astrological symbol for Sagittarius. Then, after a few months of frequent posting, the videos just stopped.

Is Unfavorable Semicircle just some kind of YouTube internal testing mechanism, like previous internet mystery Webdriver Torso turned out to be? Or is it something like an internet version of a numbers station — radio stations that broadcast long, mysterious strings of numbers, often to pass along coded messages? Is it how we're communicating with our reptilian overlords, who are already on YouTube because they love to watch beauty product vlogs? Or was it simply the art project of some bored college kids who want to make the world a little more mysterious/ interesting/ filled with robotic mumbling? Again, we don't know (though Reddit is on the case).

The granddaddy of all video mysteries, this one predates the popular use of the internet — but that hasn't impeded its legacy as a major creepy video on the web. On November 22, 1987, people in the Chicago area attempting to watch the evening news got treated to a bonus feature — a silent, 30-second pirate video intrusion hosted by a guy wearing a rubber mask that made him look like '80s cult TV cartoon Max Headroom.

A few hours later, folks in the same area who were trying to watch a Doctor Who episode on PBS got a longer version of the video that news viewers saw before: in this later version, the man in the rubber mask mumbles a bunch of nonsense for a minute and a half and then, at the videos' climax, is spanked by a woman with a flyswatter.

Technicians at both stations were astonished — though there had been previous pirate TV intrusions, most of the perpetrators had been quickly busted. But nearly 30 years later, no one has ever admitted or had the "Max Headroom mystery" pinned on them, though people have their guesses. But until someone makes a death bed confession about how in the '80s, they had this rubber mask and some signal-jamming technology, and they thought, "Hey, why not?", we're going to have to keep wondering. And isn't it nice, in our often mystery-free era, to still have some things to wonder about?