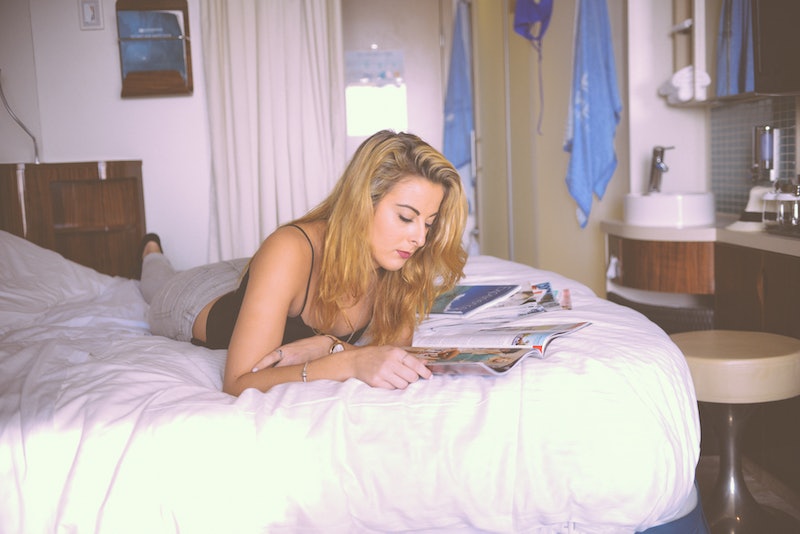 Playboy's decision to eliminate nudes from the magazine last week set the internet ablaze with debate. Is the move driven solely by profit or a desire to be more sex-positive? Is a sex-positive men's magazine an absurd oxymoron, or an actual possibility? While the answers to such questions aren't so cut and dry, there have been sex-positive moments in the history of men's magazines which are definitely worth noting.

Since I first discovered a stash of pornographic publications in a relative's closet at age 11, I've been a fan of the pin up. Leafing through the glossy pages, I was enrapt with the bountiful babes on display and the cartoons that I barely understood — but desperately wanted to. Although years later I saw beyond the airbrushing and waxed pubes to understand the complex forces at play when female bodies are objectified and commodified for ridiculous sums of money, I still retained a soft spot for skin mags.

There is no question that it is highly problematic most men's magazines promote one hegemonic standard of thin, white, cisgendered beauty, and that women rarely own and run such publications. However, that said, there are still rare moments of coverage that counter the business-as-usual misogyny we've come to expect. Here are five sex-positive moments from men's magazine history:

2. When Playboy Schooled Men On Catcalling

In a frequently shared flowchart from 2014, Playboy schooled guys on when to catcall women. The only time it's appropriate? If she has given you explicit consent that she enjoys being catcalled, or if she's literally a cat.

3. When Bunny Yeager Sold Her Pin Up Photographs To Playboy

Although the history of pin up photography usually entails a man framing our gaze at said pin up, Bunny Yeager was an early exception. She was both artist and muse, taking many famous snaps of icon Bettie Page, and frequently posing as a pin up herself, eventually selling her work to Hugh Hefner for $15k a photo.

Larry Flynt is a hotly contested figure (whom many feminists abhor), but Hustler magazine featured a lot more pube-positive cover images than other mags of its ilk. See in particular, the "Scratch 'N Sniff" image from 1977, or the "1976 Super Bicentennial Edition" cover.

5. Hustler's Declaration To Be More Pro-Woman

The grotesque meat grinder cover of Hustler from June 1978 espoused Larry Flynt's admirable mission to "no longer hang women up like pieces of meat." Props for good intentions, but this goal has yet to be achieved by any mainstream pornographic men's magazine.

Want more of Bustle's Sex and Relationships coverage? Watch people try to figure out how to use these sex toys:

More like this
The Case For A Hard Launch Summer
By Morgan Sullivan
Please Respect Mia Khalifa’s Rebrand
By Charlotte Shane
10 Eurovision Moments That Celebrate The Weird & Wonderful Camp Extravaganza
By Sam Ramsden
If Your Refrigerator Is A Mess, These 25 Organizing Products Can Help
By Courtney Young
Get Even More From Bustle — Sign Up For The Newsletter