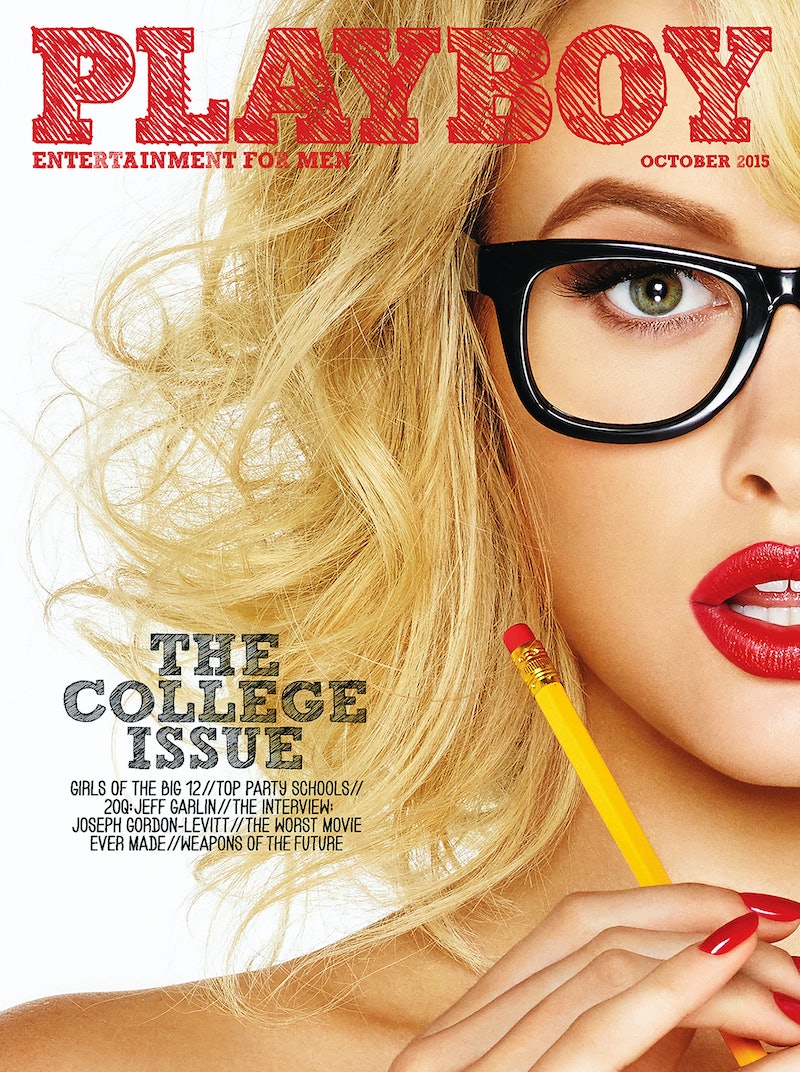 As part of their new March 2016 relaunch, Playboy will no longer feature images of women completely naked, but rather women striking sexy, and seductive poses while leaving some things to the imagination. Gloria Steinem had always been adamant about how the sexual revolution would not fully succeed if men were solely permitted to define its parameters. At the core of her argument: Playboy, a male-centric brand well known to commercialize female sexuality in the name of liberation, and sexual positivity. But does this new move actually mean the Playboy brand is moving toward a sex-positive image when featuring its bunnies? The answer is a bit more complicated than you may think.

As part of the reason for the relaunch, CEO of Playboy Enterprises Scott Flanders said they will be adjusting the brand's imagine to align with the “political and sexual climate” of the modern age. In a press release, he said, “We are more free to express ourselves politically, sexually and culturally today, and that's in large part thanks to Hef's heroic mission to expand those freedoms. We will stay true to those core values with this new vision of Playboy's future.”

They Say It's Sex-Positive, And Historically, Many Agree

When people think of the sexual revolution of the '50s and '60s, Hugh Hefner and his scantily clad bunnies are often at the center of it. Not only did Hef create a widespread, commercial forum to display female sexuality candidly, he peppered the pages with interviews and articles featuring public figures of the day like Malcon X, Margaret Atwood and Kurt Vonnegut. The bunnies and the centerfolds were seen as sexual icons; strong, beautiful women unashamed of their bodies and their desires. If you took away all of the nude pics, Playboy was fundamentally a lifestyle magazine, with well written features that often taught men how to defy conventions of masculinity in favor of being the stylish bachelor, who knows about the arts and can craft the perfect cocktail.

And now, Playboy is actually attempting to focus in on those articles (which you may or may not have read) while the overt female sexuality is put more toward the background. Cory Jones, a top editor at Playboy told The New York Times that the new, more modest photos of women will be featured alongside “sex-positive female” sex columnists writing candidly about — you guessed it— sex. To top it off, the new brand will feature investigative journalism pieces, in-depth interviews with high profile people and works of fiction. And with this more forward-thinking, all-inclusive perspective on human sexuality, Playboy hopes to target millennials, or the 20-30 somethings now dominating the internet.

But Is It Actually A Sex-Positive Move?

It's hard to say whether a nuanced, accepting view of female sexuality that could progress the sexual revolution into the 21st century was truly Playboy's intention here, or just a rebrand meant to target an audience constantly consuming media.

So naturally, a rebrand would be the obvious solution to fit the times, and that is exactly what Playboy is doing. Looking to the Penthouse example, making pornographic content more explicit, which made them go under, was certainly not the answer. By testing more safe for work content, and finding an improvement in viewership, Playboy learned that their only option was to go in the opposite direction: Focus less on the sexuality, and more on the written content.

Now, Playboy's viewership has shifted from the middle-aged adult, to the viewer just over 30 who spends most of his or her time plugged in. Since August, web traffic has increased from from four million unique visitors to 16 million unique visitors each month. Even discussions of how playmates will be featured mimic social media trends, as new images are said to be more like sexier pictures featured on Instagram.

But writing off Playboy's relaunch as a marketing scheme still seems premature. While lucrative for the brand to cater to a younger audience known to consume more media, it is still too soon to say whether or not Playboy's new content will cater to modern, all-encompassing sexuality. With suggestions of “sex-positive” columnists, and more attention to written content, there is still a chance that sexual freedom for women, something the brand has always prided itself on, will come into the modern age.