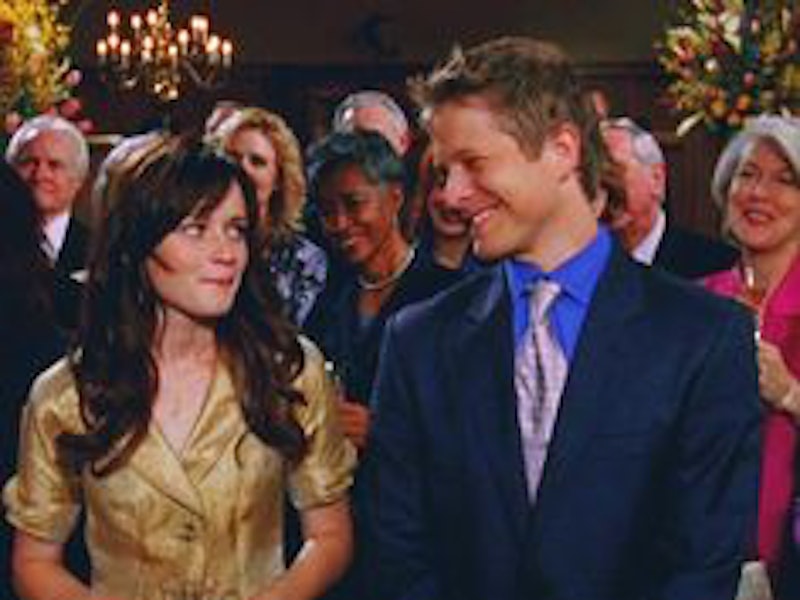 Have you heard the good news? Our dreams may come true, and our greatest wishes may be granted by the good folks over at Netflix. News has broken that a deal has allegedly been made with Warner Bros. to create a limited revival of Gilmore Girls on the streaming giant. We may finally see our beloved characters the way that we deserve to see them, through the eyes of Amy Sherman-Palladino. So the inevitable questions arise about the fates of our favorite players. One such question that we couldn't help but ask was, will the revival reunite Rory with one of her old boyfriends?

Well, while I would love to see a fresh new dude come on the scene for Rory, I can't help but hope for her to revisit one of our old favorites. She has Dean, Jess and Logan to choose from if we are looking at the major beaus. Three very different guys, all of which would be super fun to watch a romance be rekindled with, because nostalgia.

Here is where I formally take a stance, though. Hold on to your pitchforks because my choice is a controversial one. I am hoping she will change her mind about... Logan. I know. Hear me out. I have some solid reasons to back me up here people!

1. He Really Wanted To Marry Her

Guys, he really wanted to marry Rory. He really did. It was so obvious even before the proposal. Dean would have left her at the alter in front of a crowd because that's what he does and Jess would have argued with her about the relevance that a piece of paper has to truly committing to someone.

2. He Respected Her Mind

He totally respected her as a journalist and he respected her aspirations. When she wanted to go for the internship at the New York Times instead of the job offer? Logan was like "Yeah!". Dean made her feel bad for any accomplishment she ever achieved and Jess just left for another zip code whenever things got weird.

3. He Was Growing Up

Right? He was totally getting his sh*t together. Let's be honest. I can understand why the cocky little Logan of days past probably irked some people in a big way but he started to really turn things around after he broke everything in his body falling down a mountain. Sometimes it takes a little push...

4. He Never Broke Up With Her In Public

I am not naming names (Ahem...Dean) but some of her previous boyfriends have broken up with her in really intensely awful ways. Anytime an entire party or gymnasium can watch the entire decimation of your relationship, you should be psyched that the universe got you the hell out of the relationship. Logan never did that. He is a gentleman. A gentleman and a scholar, in fact.

I know Jess was also smart, but he lacked focus and realistic direction. He is one of those people that drives you nuts because they could be so successful but choose to just mumble about everything they hate. Logan was an intelligent dude that could hang with Rory's big ol' brain. He challenged her. That's super important in a good relationship. No one wants to be explaining Proust to their significant other, am i right?

He used a super obscure reference from a Twilight Zone episode to tell her that he loved her. I mean. Come on. Don't tell me that you wouldn't swoon into a puddle of glittery love goo if you got a love rocket.

No matter what, Logan showed up when he needed to show up. When Richard had a heart attack, he was at the hospital holding her hand. Meanwhile, Christopher was butthurt at Lorelei and wouldn't even show up. Someone that will hold your hand through a tough time when you need it us a keeper.

8. I Want Her To Be Rory Huntzberger

His last name is top dog. I don't think I need to explain this further.