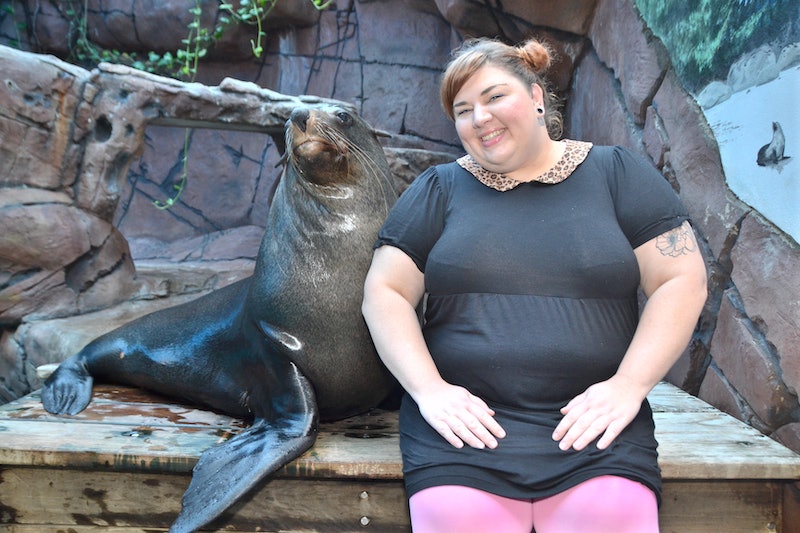 Australian fat activist and artist Natalie Perkins is a vivacious Web presence with a diverse array of interests, from big fat sewing projects to discussing Australia's refugee crisis. In Oct. 2015, she also launched her latest project: Girth Guides, a set of patches made in the spirit of the Girl Guides — or Girl Scouts, if you're in the U.S. — to celebrate life as a fat person while recognizing the challenges that people can experience as plus size activists or members of society. Her crowdfunding campaign is already well over the 50 percent point, with nearly 50 supporters from an array of nations.

Perkins took some time to chat with me via email about Girth Guides, but also about her work as the woman behind the helm of Fancy Lady Industries — the source of those excellent "FAT" necklaces you might have seen floating around in body pos spaces online — and as an advocate for fat rights in Australia and beyond. Perkins, who lives just outside of Brisbane with her husband Nick and their dogs Miffy and Jess, is a creative and cultural force to be reckoned with.

"I was never terribly invested in being skinny in high school, but I was never officially fat, more of in between size. When I was diagnosed with juvenile diabetes at 17, the insulin I had to take led me to put on more and more weight," she tells me. "It never bothered me that much, I figured I was better off for treating my diabetes properly." She continues to explain that she was led to fat activism somewhat indirectly by a boyfriend who introduced her to fat admirers (FAs), followed by her subsequent exploration into the fat community and discovery of advocate Marilyn Wann, an early pioneer of radical fat pride.

This then drew her to fat blogging, joining the fatshion community, and becoming engaged with "fatness" as a political and social identity. Perkins began making appearances on Australian television and other media outlets to advocate for fat rights, while following her passions as a designer and artist at the same time.

"Australia and the U.S. are pretty on par with the fat shaming and stigma," Perkins says when I ask her about issues she faces. "We have food deserts in remote and not so remote areas. Our news media is full of headless fatties. We have our own version of the repugnant Biggest Loser."

"I started fantasizing about belonging to a group of fat people, working towards community goals, and achieving merit badges based on whatever project we were doing."

When I asked her how she began crafting, she notes that arts and crafts seem to be very common among the fat activist community. "I have always crafted and done things with my hands," she says, "Because I love to create something from nothing. As I got fatter, I found I had to start making things for myself, because things like bangles and clothing available commercially just didn’t fit."

Fat women in particular face this problem. When people find things that do fit, they're often so hideous that hand-sewing something from scratch is understandably preferable (albeit not super common, from my experiences). For Perkins, sewing is sometimes the only way to find comfortable, well-cut clothing.

"I studied visual arts at uni and nearly became a teacher, but several episodes of debilitating mental health during my 20s derailed a lot of the plans I had for myself. During that time, I made things, drew pictures, did a lot of self directed learning, and tried to survive the best way I could," she says. Perkins designs a huge range of jewelry including acrylic necklaces, wired tiaras, chunky bangles, embroidery patterns, pen and ink drawings, paintings, and more. Much of her work explores fatness and her own relationship with her body, also delving into mental health and its intersections with identity.

"Our fat experiences are varied and the way we resist stigma and hate is different! Some people are loud, and some people are quiet. Resistance is hard work."

When she was finally diagnosed with bipolar disorder in her 30s, however, Perkins was able to start managing her mental illness and taking on the world — but mental health conditions don't begin and end with treatment, and it's a consistent theme in her life and work. It also became one of the barriers when she first began toying around with the idea of Girth Guides.

"I started fantasizing about belonging to a group of fat people, working towards community goals, and achieving merit badges based on whatever project we were doing. I love coming up with silly blog/business/project names so I was pretty proud of coming up with the name Girth Guides," she recalls. "I wanted to build in a reward system too; that’s where the patches came in. I’m very good at coming up with ideas but very poor at implementing and organizing. [This was] around the same time I was getting medication and treatment for my bipolar sorted out, which was very expensive and time consuming. My brain was a mess, I couldn’t see how to realize the idea, and I didn’t know who to talk to about what!"

However, the idea kept percolating in the back of her mind as she worked on other projects. Perhaps that's because it didn't feel like "just" art or a fun expression of fat pride, but something arguably more complex and meaningful. "Activists put up with a lot of sh*t, and since sort of burning out on doing a lot of outward facing activism (blogging, doing media, etc.), I was wanting to validate some of the personal activism practices too."

Her badges range from gleeful reclamations of fat bodies ("lovely chubby legs" and "double chin grin") to acts of protest ("ban armrests" and "I quit dieting"), and just like Girl Guide patches, they go beyond what you put on your sash. They're also about fellowship and community with other Girth Guides. She adds that there's no litmus test of "fat enough" or "activist enough" to earn a Girth Guide patch, either. You can simply purchase and collect them for yourself or for those around you whenever you're feeling especially proud of your activism, your self love, or your wobbly bits.

"Our fat experiences are varied and the way we resist stigma and hate is different! Some people are loud, and some people are quiet. Resistance is hard work."

The Girth Guides crowdfunding project will run until Nov. 24, with all sorts of nifty prizes including, of course, the initial run of 12 patches and some backer-exclusive gifts. Whether you want to rep some fat pride or send some as a gift, definitely check it all out.