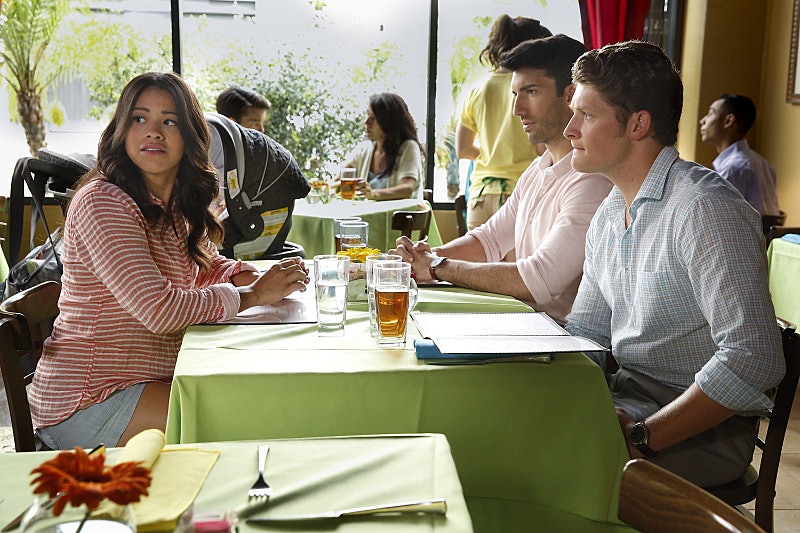 When your baby gets kidnapped by an evil drug lord, romance tends to be the last thing on your mind. So it's totally understandable why Jane the Virgin Season 2 has been somewhat reluctant to tackle the biggest question that's been on everyone's mind all summer long: who is Jane in love with, Michael or Rafael? Now, this love triangle has been up in the air for quite some time now, with Jane's affection swaying from one dreamy guy to the other. (Talk about a difficult job, amirite?) But now that Mateo is safe and sound, it was time for our leading lady to do some real soul searching and think about which man she wants to be with for the long haul. And it turns out that Jane came to a very important realization. She loves them both.

I know, I know. To some this may feel like a bit of a cop out since no actual decision was made. But, in my humble opinion, I'd say that Michael seemed to have a bigger advantage by the end of the hour. Like any good 'ship, there are pros and cons to either option. Michael has his fair share of strengths and weaknesses, and so, in turn, does Rafael. But come on, people — it's clear by now that Michael is much more deserving of Jane's heart.

Granted, both guys gave compelling arguments and showed off some of their best qualities. (When they weren't too busy fighting each other, of course.) But watching Jane and Michael's past history together (the giraffe!) and how supportive and attentive he is to Jane's needs, it's almost impossible to not be in his corner. And the great thing is, he knows it. In fact, he knows Jane so well that he understands deep down that she'll make the right decision. She doesn't love Rafael. She just loves the idea of family. And eventually, she'll realize that and want it with Michael.

So yeah, technically no official decision has been made yet. But the groundwork has been laid and I think it's completely in Michael's favor. And that, my friends, is the type of deal breaker I could get used to.