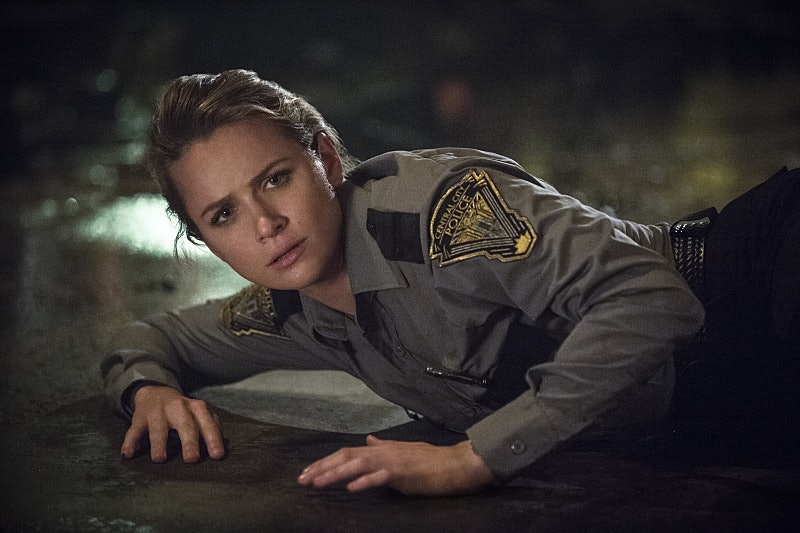 There's a new police officer in town and she's already caught Barry Allen's eye. Patty Spivot was introduced on The Flash last week, and I expect her to stick around for a while. It's clear that she's already got a little bit of a crush on Barry — because how can you not? — and I bet we're going to see that continue to grow. Barry just might take a liking to her too, because looking at Patty Spivot's background in DC Comics, a relationship for the two of them could be on the horizon. Spallen? Parry? What's the 'shipper name for this, you guys, because it's totally going to happen and it's already being hinted at on social media.

Before we get to that, however, we have to talk about Patty's role in the comics. She's been around for a long time, and has always been an ally for Barry. Originally, she worked as Barry's assistant at the crime lab. She had a crush on him (again, how could you not?), but knew that Barry had feelings for Iris, so she never interfered with that. For a while, Patty actually becomes Hot Pursuit, which is not a character that has been seen or hinted at yet on The Flash. So let's not even go that route until we see Patty build her own Cosmic Motorcycle.

Like many things, The Flash comics were rebooted at one point and when that happened, Patty got a new backstory, which is the current timeline of the comics. She still works at Central City Police, and still alongside Barry. She doesn't realize Barry is the Flash at first, and accidentally learns his identity. Though she's shocked at the reveal, she doesn't think differently of him. That's because she's once again got a crush on him, but in this new timeline, Iris is out of the picture. So you know what that means? Barry + Patty.

Even though she's only been in one episode so far, Patty has to stick around for at least a little while, because actress Shantel VanSanten teased a date between her character and Barry in the Nov. 3 episode to TVLine. So it seems that Patty's crush will be reciprocated enough for the pair to at least give one date a shot. Obviously, we all know Barry loves Iris in this version of The Flash, but since he's still dealing with the fallout from the singularity and Eddie's death, he's probably going to focus on their friendship for now. That makes this a good time for him to pursue romance elsewhere, and based on Grant Gustin's Instagram post below, it seems like Barry and Patty may last longer than one date.

The caption tells us that Gustin and VanSanten recently a scene together, but that's not the most exciting part. Both of them are totally dressed down in their PJs, and she's wearing a flannel shirt that is loosely buttoned and maybe a few sizes too big. Could this be a Flash sleepover?

It's official: We need to figure out a 'shipper name for these this Flash pair ASAP.

More like this
What Does Doctor Strange’s Third Eye Mean?
By Arya Roshanian
Grey's Anatomy Fans Refuse To Accept Kaimelia's Shocking Relationship Update
By Brad Witter
Oops! The 'Stranger Things' Monopoly Game Has Spoilers For Season 4
By Alyssa Lapid
20 Photos From The 'Stranger Things' Season 4 Premiere To Make You Feel Old
By Alyssa Lapid
Get Even More From Bustle — Sign Up For The Newsletter