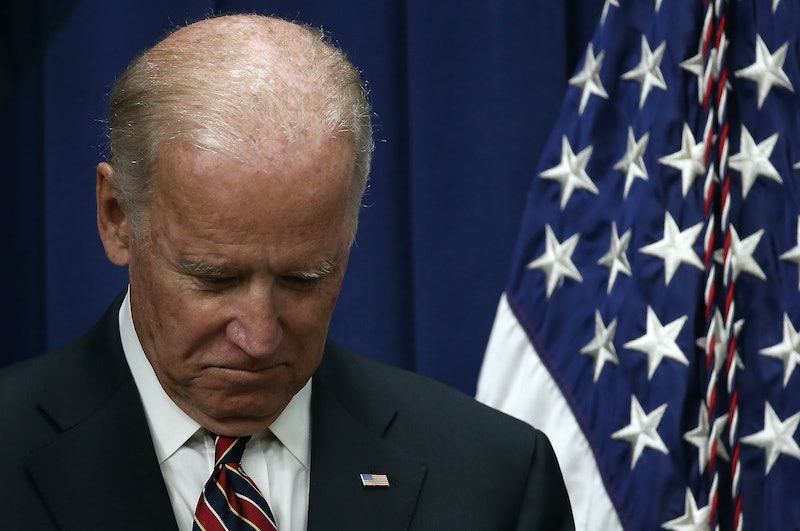 As Vice President Joe Biden pondered a 2016 run for the presidency, he pointed to his family as the deciding factor. And upon his announcement that he would not in fact run, he cited his family as integral to that decision. Previously, Biden had said that he wasn't sure if they're ready for the pressure and scrutiny of a presidential campaign, especially given that they were still mourning Biden's oldest son, Beau Biden, Delaware's former attorney general, who died in May of brain cancer at the age of 46. Beau's death was the latest tragedy Biden's family and children have experienced.

Biden had three children with his first wife Neilia, who died in a car crash while Christmas shopping in 1972, shortly after Biden won his first Senate campaign. Her car was struck by a tractor trailer as she pulled out into an intersection. Their one-year-old daughter Naomi was also killed. Beau and his younger brother Hunter survived the crash and were taken to the hospital, and Biden was sworn into the Senate at his sons' bedsides. He went on to serve in the Senate for 36 years before being tapped to be vice president by President Obama.

In 1977, Biden married Jill Hunter. The couple has one daughter together, Ashley. In his 2007 memoir, Biden said that Jill "gave me back my life; she made me start to think my family might be whole again." Jill also grew close to the two boys who would become her stepsons. Biden says it was their idea to ask Jill to marry him. He wrote that he remembers the then-seven-year-old Beau saying, "We think we should marry Jill. What do you think, Dad?”

Before Beau Biden's untimely death, he had worked in public service, like his father. Joseph Robinette Biden III, nicknamed “Beau," had been a rising star in the Democratic Party since 2008, when he gave a fiery introduction for his father at the Democratic National Convention in Denver. He was then deployed to Iraq, and was awarded the Bronze Star during his service.

Beau was sent to Iraq while serving as Delaware's Attorney General, and he temporarily transferred his duties to his deputy. He decided not to run for reelection in 2014, planning instead to run for governor of Delaware in 2016 before his health failed. He attended the University of Pennsylvania for a bachelor's degree and law school at Syracuse University, where his parents had both studied. He had two children with his wife Hallie at the time of his death.

Joe's second-oldest son, Robert Hunter Biden, who goes by Hunter, went on to be a successful lawyer with a lower profile, despite a few recent controversies in the public eye. He went to Georgetown for undergrad and Yale for law school. Over the years, he has worked at MBNA (a financial company) and the Department of Commerce, and he sat on the board of Amtrak until 2009. In 2013, he joined the U.S. Navy Reserve, but he later tested positive for cocaine and was discharged. He currently sits on the board of several nonprofits, as well as a Ukrainian energy company. When Ashley Madison accounts were hacked and leaked, one connected to Hunter's email was published. He has claimed it was created by Russian agents who oppose his work with the Ukrainians. He has three children with his wife Kathleen.

Ashley, Biden's daughter with Jill, has kept the lowest profile of all. She is the executive director of the Delaware Center for Justice, a nonprofit specializing in incarceration. It pursues alternatives to imprisonment, helps with reentry for those leaving prison, and researches crime prevention. According to her marriage announcement in The New York Times, she used to work as a social worker for the Delaware Department of Services for Children, Youth, and Their Families, where she designed programs for kids in the juvenile justice system. She went to Tulane University, and then got a masters in social work from the University of Pennsylvania. She is married to Dr. Howard Krein, a surgeon and associate professor in Philadelphia.

Both Hunter and Ashley spoke at their brother's funeral. Hunter remembered waking up after the car accident to his brother saying, "I love you, I love you, I love you." He went on to say that his brother left very much the same way, with the family surrounding him. Ashley said that her life has been largely shaped by her brother: "Nothing I say will give justice to what he means to me, to us."

The family's suffering was Biden's main concern when he was deciding whether or not he should run for president. And no wonder.