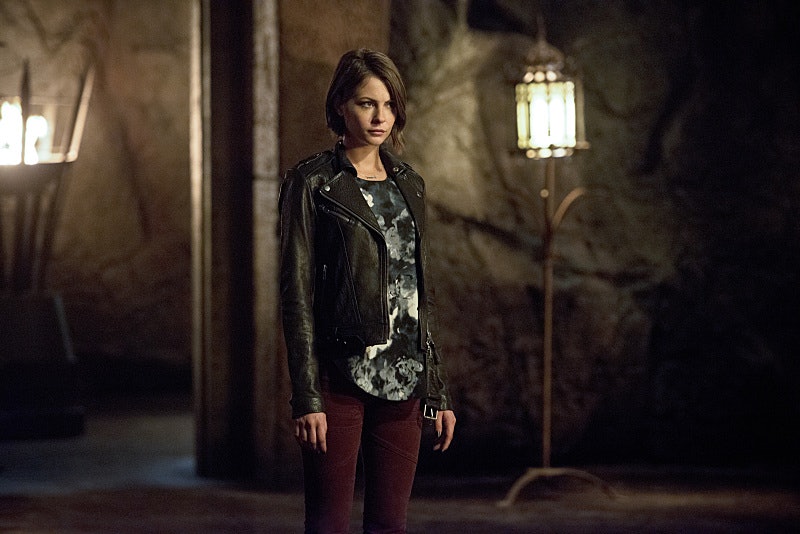 No one likes to think about a beloved character dying, but it's something every Arrow fan will eventually have to make peace with, considering the mysterious grave we saw in the Arrow six-month time jump. And while the name on that tombstone will undoubtedly remain unknown for quite some time (even the writers don't know who it'll be yet), you can bet that it's going to punch us all right in the feels. This won't just be a random side character. This will be one of the main stars that we've come to love throughout the years, which makes this looming fate all the more terrifying. And since I'm in flat out denial that Felicity is the one buried in the ground, I'm starting to wonder if maybe Thea will be the one to die by the end of Arrow Season 4.

It's a terrible thought to even consider, not just because she's pivotal part of Team Arrow (or is it Team Green Arrow now?), but also because she represents Oliver's last living relative. (Well, that he knows of, at least.) Seriously, though, this poor guy has awful luck in the family department. Both of his parents are dead, he doesn't seem to have any aunts/uncles to speak of, so Thea is pretty much all that he has left in that department. But given the dangerous side effects of the Lazarus Pit that have started to take hold, it's not too big of stretch to think that her days could be numbered.

Both viewers and Oliver have now witnessed Thea's violent nature firsthand. There's a lot of darkness and hatred built up inside of her, which is made all the more prominent when she's in fight mode. Sure, I suppose there's always a chance that she and Laurel can find a way to fix this condition during their Nanda Parbat road trip, but that pit has been known to change people. There may be no way of coming back back from that, even with Malcolm Merlyn's help.

I also think that Barry Allen's presence at the grave should also be considered as a type of clue to the identity of the character. At first, I thought this definitely meant that it's Felicity. (She and Barry were very close friends, after all.) But now that I think about it, given that this takes place six months into the future, there's plenty of time for our favorite speedster to get to know other members of Team Arrow just as well. And considering that The Flash has a lot more experience dealing with mystical elements thanks to their constant interaction with meta-humans, maybe the folks over at Central City try to help find a cure for Thea's Lazarus ailments.

During that time, Thea and Barry could become close (they do both have a thing for the color red), so his presence at her grave would make perfect sense then. He wouldn't just be there to console Oliver. He'd be there because he got to know her as well. So when you add all that to the look of devastation on Oliver's face, I think you'll agree that Thea's fate could end up being very, very dark indeed.

More like this
The Grey's Anatomy Season Finale Finally Revealed If Japril Got Back Together
By Brad Witter
'Obi-Wan Kenobi' Takes Place After This Key Star Wars Movie
By Arya Roshanian
'Gentleman Jack’s Cast & Crew Are Keen On Season 3, Too
By Frances Stewart
The 'It's A Sin' Creator Revealed A Massive Detail That Didn't Make The Final Cut
By El Hunt
Get Even More From Bustle — Sign Up For The Newsletter