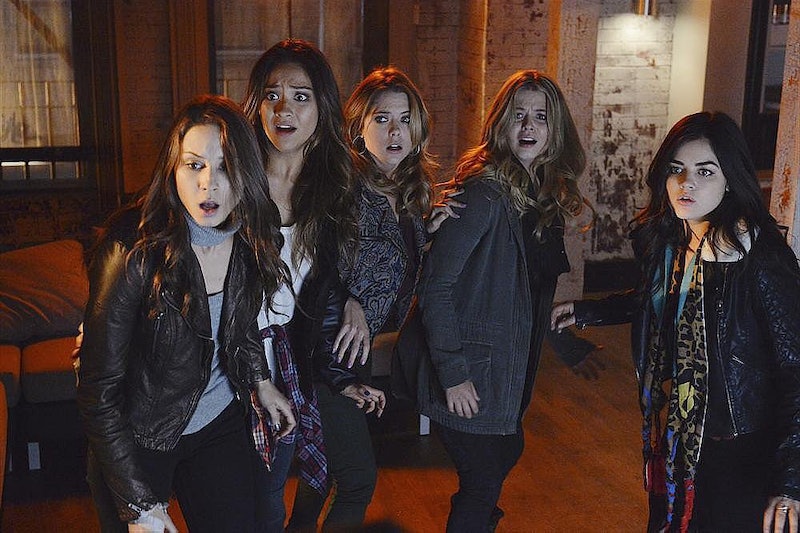 There are moments of Pretty Little Liars that are straight up terrifying. Perhaps that's why — with Halloween right around the corner — now is the perfect time to watch and/or re-watch the scariest Pretty Little Liars episodes ever. I mean, forget the gory movies, right? For your dose of chills, and thrills, just look to the liars. Because if there's one thing I. Marlene King has given us via PLL — besides an alarming fascination with the lives of fictional teenage girls — it's creepiness. Edge of your seat, watch with one eye open and all the lights on creepiness. (For reference, see an overwhelming amount of dolls, masks, and jump cuts present in at least every other episode.)

Sure, the typical Halloween specials on PLL always bring their terror A-game (puns!), but some of the scariest moments have been happening on your average, Tuesday episode. You might have forgotten about all the momentous — and even not so momentous — frights that "A" has bestowed upon us, but, lest you forget, PLL is, above all else, a show that's meant to bring the scare. The greatest, most bone chilling moments of PLL don't depend on jumps and blood to terrify us. No, sometimes the greatest ones are long, drawn out story lines that play on our anxieties and fears, or small quips that remind us that, even when we feel comfortable in our own house, there's the possibility that we're being watched.

These 13 episodes are a mixture of the macabre, the frightening, and the all together, spine shivering.

Most of this episode isn't too scary... until Spencer gets trapped in a fun house. Clowns. Black lights. Cryptic messages. I just can't imagine that there's anything more terrifying than that.

Ian and Spencer, Spencer and Ian. An already chilling tale. Amplified by Ian being pushed to his death, and then his body subsequently going missing. The mystery of his death haunted us for seasons to come.

This episode really brings it in terms of creepy doll imagery. Remember when the large crate that housed three dolls — each one corresponding to the liars — showed up at Spencer's door? Worst present ever.

How can we forget the scene in the green house? The mask and the garden utensil are two of the most petrifying things "A" has ever donned.

From the 9-year-old little boy who knows too much to a reprisal of the creepy dolls (but this time even creepier and more demented versions of themselves), it's an eerie, wild, Twilight Zone-esque, ride of an episode.

The Hitchcockian scene of Hanna in the shower with A watching/approaching her has left a terribly haunting image on my brain. Also, the reveal of Mona-as-"A"s lair, complete with a clown mask, is one of the most dreadful scenes of the series.

Most of the PLL Halloween specials are haunting, but there's something about this one that proves to be extra bone chilling. Perhaps it's because the characters are in a confined space the whole time... or maybe it's because it boasts the scariest and most macabre moment in PLL history: Aria trapped in a coffin next to a deceased Garrett.

For the sole purpose of the haunting Mona image, where she hums the following lines: “Miss Aria, you’re a killer, not Ezra’s wife.” “Where were we? Maya’s away sleeping sweet, until Garrett’s all rosy count on me.” “No one to save Ali from evil.” FRIGHTENING.

This particular episode is packed with suspense, action, and scares as Emily tries to save her girlfriend from stalker/potential killer, Lyndon James. Plus, there's the added tension of it being dark, foggy, and happening at the top of a lighthouse.

The Season 4 finale gave answers, sure, but also lots of WTF moments. Like when the girls are trapped on a rooftop, and Ezra gets shot. Or when Alli's mom is dragged away by "A" in the last moments of the episode. Haunting images.

Aria and Spencer almost freezing to death was a scene that might not have been the scariest scene of all time (no masks, no cryptic messages), but it was unnerving nonetheless.

Sara Shepherd even tweeted that this was the scariest episode yet, and, I have to say, I agree. The doll house utilized typical fear tactics — panic, distress, etc — but took them to the extreme. And again with the doll imagery! It never gets not horrifying.

Well, now I can't sleep for two reasons. First, I'm terrified after revisiting all of this. And, second, I'm anxious for PLL Season 6B. Help.