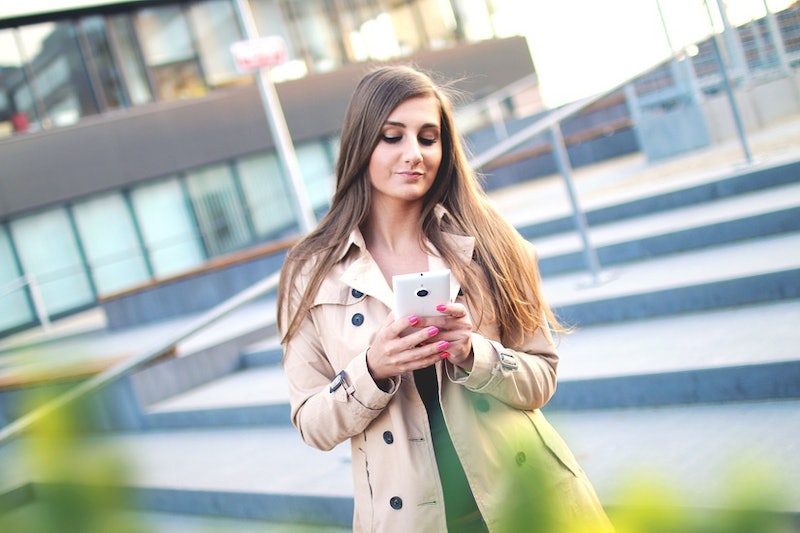 Figuring out a handful of go-to ways to be more assertive and confident is often easier said than done. For many of us, the very thought of speaking up at a meeting or saying no to a friend is enough to send us running for the hills. But being assertive is actually not that scary — it just takes a little practice.

According to the dictionary, assertiveness is officially defined as, "being able to stand up for your own or other people's rights in a calm and positive way, without being aggressive, or passively accepting 'wrong'." OK, so all that means is confidently and nicely pointing out what you need, what's wrong, what you don't want, and what you do want. That's not so bad, right?

Assertiveness really is a handy skill, and can be applied to all aspects of life. Whether it's at work, with friends, or in your relationship, having the ability to confidently say what you're thinking is far better than being a doormat, or silently stewing over all the injustices of the world.

If you'd like to know how to handle yourself with your boss, or when someone cuts you off in line at the coffee shop, here are five tips for what you can do to be more assertive in any situation.

1. For Getting What You Want At Work

Being assertive at work is a skill that takes some serious work. It can be incredibly nerve-wracking to bring up that idea you had, or to point out something that's going wrong. After all, we want our boss and colleagues to like us, and it's only natural to not want to step on anybody's toes.

But why do we feel the need to keep quiet? Our hesitance to speak up may come from the fact that female assertiveness is often viewed negatively, especially in the workplace. According to Marcia Reynolds, Psy.D., for Psychology Today, "Women often have a smaller range of acceptable behaviors at work than men. If they are too nice, they are seen as weak or manipulative. If they are too aggressive, they are judged as acting like men..."

Don't let this unfair standard keep you in the shadows. Stick up for ideas, respectfully listen to what others have to say, seek common ground with your peers, and don't get too hurt if people are critical. According to Reynolds, "Being diplomatically assertive doesn't mean backing down. It means you know how to present what you believe in a way that others will hear, understand and hopefully, align with your thinking. When enough of us model this behavior, the name-calling might stop, or not. But at least leading change will be easier."

2. For Gaining Your Family's Respect

As an adult, it can be pretty tricky dealing with your parents and other adult relatives. They most likely still see you as their little kid, and will often treat you as such. After all, it's probably incredibly difficult for them to switch their mode of thinking from "I should change your diaper," to "I trust that you have an opinion about global politics."

While it's important to cut them some slack, it doesn't mean you have to put up with being viewed as a perpetual baby. If you'd like to be treated as an adult, then start treating your parents like adults as well. When they see you acting like a self-sufficient grown up, they will start to realize you totally got this and don't need them to fawn over you. But if they don't take the hint, it's important to respectfully, yet confidently, say that you don't appreciate how they treat you, according to an article in Reader's Digest . Instead of living with resentment, be sure to open up some communication so they have the chance to recognize how you'd like to be treated.

3. For Learning How To Say No To Friends

So you just got home from work, pulled on the comfiest pair of sweatpants ever, and you're about to have yourself a time with a tub of ice cream and your Netflix queue. Then the phone rings and it's your friend wanting to go out. You had your heart set on a night in, but now your guilty conscience is telling you otherwise.

Many of us have a hard time telling our friends no. Not only because we don't want to let them down, but also because we sometimes fear how we'll be perceived if we don't accept an invite. The truth is, you are doing a disservice to your friend by saying yes when you really want to say no. You won't be truly present, or any fun to be around, if you are going to something begrudgingly. Instead of agreeing for the sake of agreeing, practice saying no with confidence. Try something like, "I'd love to, but I already have plans. How about we do something next week?" Feel confident with your decision to stick to your guns, and trust that your friends will understand.

4. For Having Healthy Communication In Your Relationship

If there's ever a situation when assertiveness can take a backseat, it's can definitely be dealing with your one and only. This is especially true if you're in a long-term relationship, or if you live with your significant other. It's easy to let things slide for the sake of harmony in your home, but keeping things bottled up is doing nothing for the trust and respect you should both have for each other in your relationship.

So if something is bothering you, recognize that you have the right to air your grievances, whether it's about something small, or a huge problem. If you want to do this right, keep in mind a few key ways to approach a conversation like this with assertiveness, according to the Mayo Clinic. First, make sure to keep your emotions in check. Don't start up a conversation if you are mad, and be sure to take time to cool off if things go south during your talk. Secondly, make sure to use "I" statements instead of "you" statements so that your darling doesn't feel like you are accusing them of something. And third, give yourself a little practice before bringing up a difficult topic. Take some time to write down your thoughts, or role play the conversation with a friend so you feel confident with what you want to say.

5. For Standing Up For Yourself In Public

Let's say you're waiting in life for coffee and someone barges in front of you. You can sigh heavily and cast knowing glances at those around you, or you can stand up for yourself and say something. Situations like these are funny, though, because it's easy to feel like you're the one being rude if you point out the other person's indiscretion. This probably has something to do with the fact it's all happening in public. According to Elizabeth DeVita Raeburn at CNN, "You'd think that speaking up with strangers would be easy — after all, you never have to see them again. But some of us actually have more trouble in these situations because we feel like our speak-out skills are on display."

While it may feel uncomfortable, trust that you have every right to stand firm and protect your rights. Confidently say something like: "Excuse me, but I was next." Don't apologize or be sheepish about it, and don't feel embarrassed once it's done. If you are confident in your tone and language, you'll feel much better for setting right what once went wrong.

Whether you are having a simple run-in with a stranger, or a life-changing moment at work, recognize that you have the right to stick up for yourself and ask for what you want. Assertiveness is a skill that takes some practice, but the more you do it, the more you'll see how much easier life is when you have a little confidence.