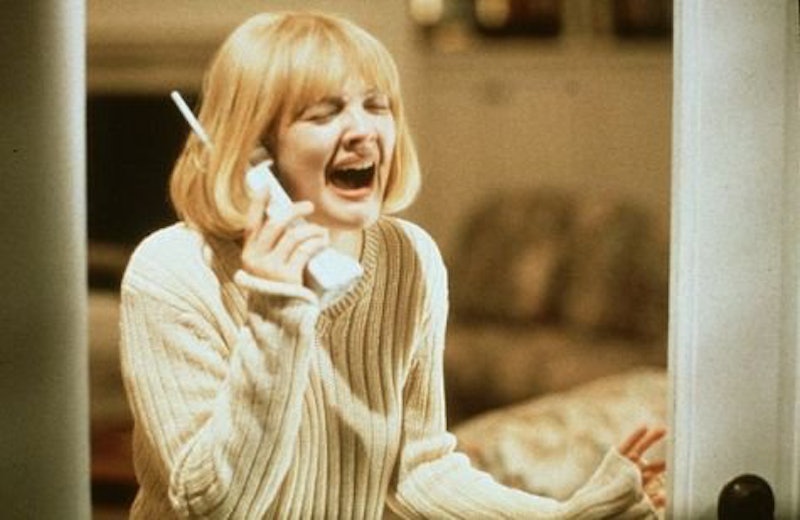 Haunted houses, monsters under the bed, demonic babies, and an iconic Drew Barrymore sweater — Halloween season is upon us. The portal between realms is at its most aligned, and zombies rise from their graves to settle scores and exact their revenge. Days get shorter, nights get longer, and we all know that everything is just a little more terrifying in the dark. This year has been a good one for Halloween-centric films — from Rebecca Hall's The Gift to Jessica Chastain's Crimson Peak, there are more than a few worthy additions to the scare-fest cannon. But the upcoming holiday is also the perfect occasion to revisit old favorites, many of which can be found on Netflix. Though the most brutal of slasher flicks have never been quite my cup of pumpkin spice, I have a weakness for the things that go bump in the night. And even if you prefer something a bit more mundane, this ranking of Halloween movies on Netflix in order of scares should have something for everyone.

First off, I've got to define "Halloween movies." There's nothing less scary than something that immediately shows its hand — knowing that witchcraft is behind all the gruesome happenings ruins all the fun. So no, not all of these movies take place on All Hallow's Eve, but they do all share a predilection for grand costumes, abandoned mansions, the uncanny (in the literal, Freudian sense), and the dead, well, probably not staying totally dead. They vary from Corpse Bride (not scary but still very amazing) to The Babadook (very scary, also very amazing), with a whole lot in between. So without further ado, the top 13 scariest Halloween films available on Netflix right now:

1. Least Scary: The Nightmare Before Christmas

Halloween takes on Christmas in this Tim Burton chef d'oeuvre. Unable to be confined to a mere single night in October, a jack-o-lantern come to life kidnaps Santa Claus — it's kind of like a pumpkin-centric How the Grinch Stole Christmas. A little bit of festivity makes this one among the least scary Halloween films on Netflix right now. Plus, it's animated.

My favorite among Tim Burton's films, this one is just slightly darker and scarier than The Nightmare Before Christmas, though still totally manageable. A zombie woman kidnaps a young man — her new lover — to the underworld in an attempt to win his heart. Musical numbers abound, as per usual.

Christina Ricci's breakout role as Wednesday Addams is just one of the delights of this Halloween classic. It's rare that a film adaptation of a cult classic television show lives up to expectations, but The Addams Family is a cult favorite in its own right.

It's a spoof, which takes some of the fright out of it right off the bat. But still, it plays on Halloween-centric tropes and typical slasher films, so there is blood and gore aplenty.

Though it's not the most terrifying, this darkly sweet vampire bildungsroman is one of the most critically acclaimed Halloween horror films to be released in the past decade. The original Swedish film, which inspired the more recent American remake called Let Me In, is the movie you should be streaming.

This movie is terrifying, but it has also dated considerably since its 1968 premiere. Directed by Roman Polanski pre-scandal, Rosemary's Baby features a skeletal Mia Farrow who may have been impregnated with the spawn of Satan, and her neighbors might be in on the deal. One of the most well-worn Gothic themes is the woman who is convinced she's gone mad by everyone around her, and Farrow plays this perfectly, right down to the thoroughly ambiguous conclusion.

If Rosemary's baby were really replaced with the spawn of Satan, The Omen would be the spectacularly eerie result. This 1976 classic stars Gregory Peck, and it was a massive hit upon its premiere. Now, it's just a brilliant cult classic.

8. Children Of The Corn

This Steven King-adapted film tells the story of a town populated exclusively by children — because they murder all the adults who pass through. One tourist couple has the misfortune of getting stranded in the town, and you can imagine where it goes from there.

The legend of Ichabod Crane gets the Johnny Depp treatment in this Tim Burton film from 1999. Christina Ricci again proves her ability to take on a Halloween-centric role in this spiritual successor to her role as Wednesday Addams — a more ominous take on the part she played in childhood.

Wes Craven's original masterpiece is inspired in part by the real case of the Gainesville Ripper. It features Drew Barrymore, a killer called Ghostface, and a little bit of comedy that doesn't entirely counteract all the slasher terror.

A young (female!) vampire stalks an Iranian town — A Girl Walks Home Alone At Night is both a refreshing reversal of the male-killer female-victim scenario often found in horror, and a stunning arthouse romance.

A storybook appears in a young boy's room, simply entitled The Babadook. It details the creepy monster coming to haunt the house where the boy lives with his mother, his father having just died the year prior. The Babadook is both a terrifyingly real threat and a symbol of the monsters the two can't quite put to rest in the wake of the death of a father and husband. I watched this one alone in my apartment one night, and I navigated my apartment with my back to the wall at all times for days afterwards.

Blood and guts were never my favorite elements of horror films, and I don't think that a movie can lean entirely on its shock value. Yet Saw does just that — it's a taut slasher-fest in which the killer, Jigsaw, only submits his victims to situations in which they might die. He doesn't actually kill them, and that's the truly terrifying factor.

With friendly animations and menacing slasher films, Netflix has a little bit of something for all Halloween denizens. If the prospect of leaving your house and submitting to the real demons around us seems too much come Oct. 31, staying in with some perfectly fictional demons is a pretty great option, too.

More like this
Michael & Kathleen Peterson’s House From ‘The Staircase’ Has New Owners
By Kadin Burnett and Kayla Blanton
Jennifer Lopez Found The Perfect Ben Affleck Throwback Video For Mother’s Day
By Stephanie Topacio Long
Ryan Reynolds’ Mom Hilariously Tests His Patience In A Mother’s Day Video
By Brad Witter
What Does Doctor Strange’s Third Eye Mean?
By Arya Roshanian
Get Even More From Bustle — Sign Up For The Newsletter