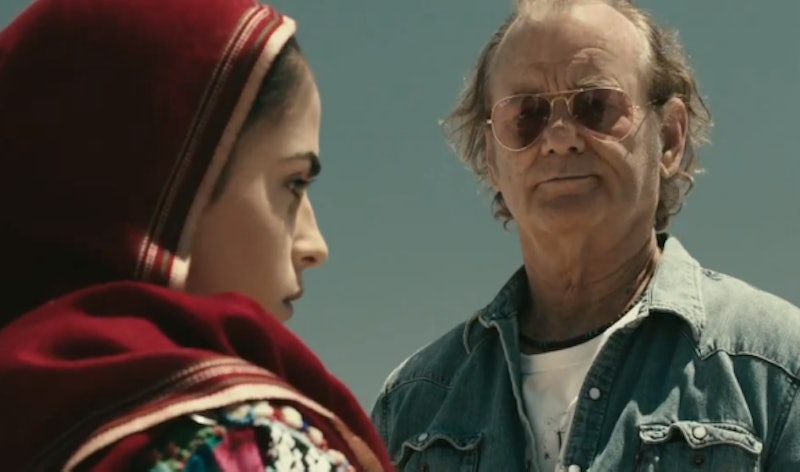 In the new comedy film Rock the Kasbah, Bill Murray plays former big shot music manager Richie Lanz. In the film, Lanz travels to Afghanistan with his client (Zooey Deschanel) so she can perform in a USO show, but she ditches him soon after they arrive in the country — taking his wallet and passport in the process. Left without money, a way home, or really, any direction at all, Lanz discovers a talented local girl (Leem Lubany) who dreams of competing on the Afghan version of American Idol, Afghan Star. Lanz then decides to help guide her on her path to possible stardom, showing that he may not be as washed up as everyone thinks. Since this is a movie about the music industry, fans are expecting some stellar tunes, and unsurprisingly, the Rock the Kasbah soundtrack is all kinds of awesome.

The soundtrack for the film, out Oct. 23, mixes a lot of classic rock with some eclectic new offerings by modern artists, along with a score that reinforces the film's geographical setting, and a number of covers from the cast. It's the classic rock that gets the most time here, though, which isn't surprising considering both the film's name and the viral marketing video claiming Lanz was responsible for giving Madonna her name, telling Slash to wear a top hat, and making sure the good drugs got into Woodstock.

In addition to the fictional Lanz's impact, there is also the very real presence of Cat Stevens throughout the soundtrack. The work of the singer, who now goes by Yusuf, was so integral to the film that the movie likely wouldn't have been made without his approval. Lubany performs three Cat Stevens covers on the soundtrack, crooning her versions of "Trouble," "Wild World," and "Peace Train." Yusuf himself also shows up on the soundtrack, with his song "Pop Star."

Other classic rock stars on the official soundtrack include Bob Dylan singing "Knockin' on Heaven's Door" and Harry Nilsson performing "Jump Into the Fire." One of the film's trailers features David Bowie's "Rebel Rebel" and Free's "All Right Now," though neither song is listed on the film's soundtrack. The film's other trailer features Murray covering the first song everyone learns to play on the guitar, Deep Purple's "Smoke on the Water." A cover that does, by the way, close out the soundtrack.

Songs by newer artists on the soundtrack include Pashtun Warrior by Jalal el Allouli, Youness, and Adil Meriouch; Torch by Isa Machine & LP; and a cover of "Bitch" performed by Zooey Deschanel, plus a few tracks off the score composed by Marcelo Zarvos. Snippets of several of the soundtrack's offerings, including some of Lubany's haunting covers, can be heard in the promotional video below.

Here's the complete track listing for the soundtrack, which is out Oct. 23, but can be pre-ordered now on Amazon.

So now that you know how great the Rock the Kasbah soundtrack is, you can appreciate the movie a little more — and also appreciate the prowess of Murray's vocal cords.

More like this
Rita Ora Celebrates Finding Her "Fairytale" Ending With Taika Waititi
By Sophie McEvoy and Catharina Cheung
Pro Footballer Zander Murray Is "Blown Away" By Support After Coming Out
By Sam Ramsden
Everything To Know About Taylor Swift’s 10th Studio Album, 'Midnights'
By Grace Wehniainen and Jake Viswanath
Looks Like She Made It
By Lindsay Zoladz, Beau Grealy and Tiffany Reid
Get Even More From Bustle — Sign Up For The Newsletter