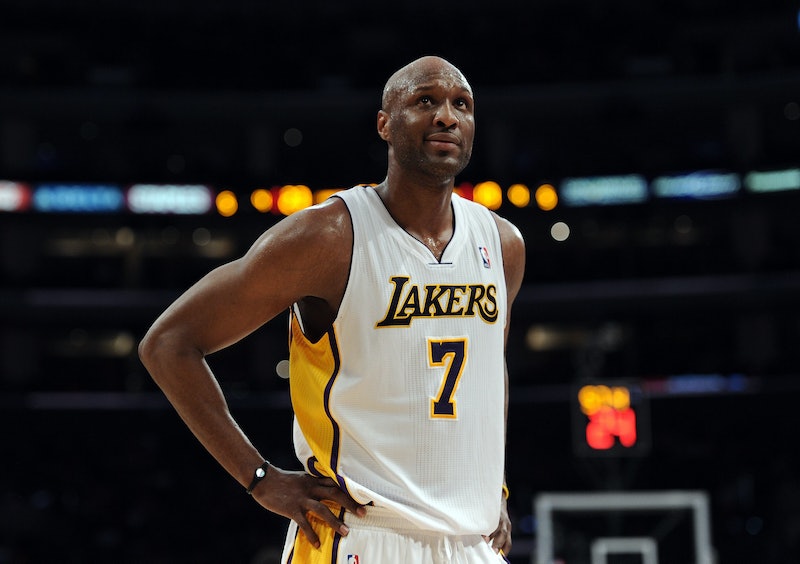 As wonderful as it is to hear that former NBA player Lamar Odom's condition is reportedly improving, it's important to remember that Odom isn't all better and completely healed. The next days, weeks, and probably even months will most likely be pertinent to the 35-year-old's recovery. After he was found unconscious at a Nevada brothel on Tuesday, Oct. 13, there were reports that he allegedly overdosed on illegal and unregulated drugs. He was also reportedly in a coma for several days. However, Odom's aunt, JaNean Mercer, told BuzzFeed in a statement that he is making "miraculous progress" and has even started to walk, which is great news. With that said, here's a further look at Odom's recovery ahead.

On Monday, Us Weekly reported that the former Keeping Up With the Kardashians star was moved to a Los Angeles rehab center at Cedars-Sinai Hospital by Khloé Kardashian and Kris Jenner, "so they can all be closer to him." The source also claimed, "He's still getting better little by little. The doctors are starting to talk about plans for what happens when he gets out and that's how rehab came up, but he still has a ways to go." The same source claimed that Odom's recovery is going to be a "struggle" and is "slowly improving."

Now that Odom is in L.A. and reportedly getting better, a source told Us Tuesday, "He’s still really, really sick. There are a million things they’re doing to him still. He’s not doing well. He’s talking a little bit, but not full sentences." According to TMZ's sources who claim to be close to the former NBA star, Odom's kidneys are allegedly failing and he could need a transplant. TMZ also reported that Odom "will undergo six hours of dialysis a day, but the end game may well be a transplant." They also reported Odom's transfer from the Las Vegas hospital to L.A. doesn't mean his healing process is done.

"A person with knowledge of the situation" told USA Today Sports Monday, "There is more optimism and a different vibe. There are lifted spirits now."

Even Khloé Kardashian released a statement that seemed to be optimistic on her website Tuesday:

The past week has been incredibly difficult. I am so thankful to family, friends and fans, who have sent nothing but prayers and well wishes to Lamar. I also want to take a moment to thank everyone at Sunrise Hospital, including the amazing doctors and nurses for their kindness and diligent work. Under their amazing care, incredible strides have been made. You can never be prepared for an experience like this, but without the outpouring of love and endless prayers that Lamar has received and the strength I was given from my loved ones, it would have been difficult to endure. Thank you for your continued support. God is great!!! XOXO, Khloé

Bustle has reached out to Odom's rep regarding the most recent reports about his hospitalization, but has not yet heard back. Previously, in response to the early reports about Odom's health, his rep released this statement to Us Weekly: