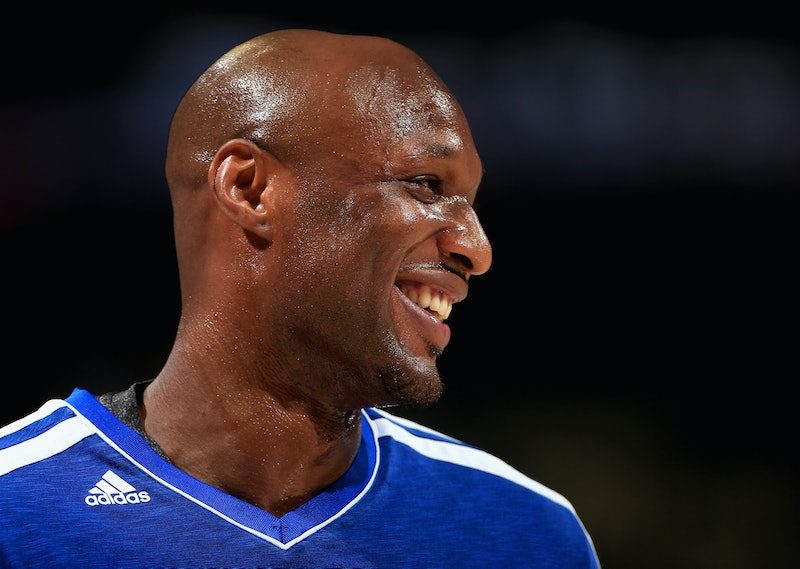 It's certainly been a difficult five days following Lamar Odom's hospitalization on Tuesday, when he was found unconscious and unresponsive at Dennis Hof's Love Ranch South in Nevada. The former NBA player fell into a coma for nearly four days, with reports claiming that he was experiencing heart failure as well as lung and kidney failure, and that his condition was not improving. However, things reportedly took a turn for the better on Friday, when Odom allegedly regained consciousness and was reportedly able to communicate with hospital staff and estranged wife Khloe Kardashian, who reports say has remained by his bedside throughout the ordeal. Now, updates on Sunday about Odom give even more reason to hope.

While the barrage of statements and reports about Odom's alleged condition at any time certainly don't imply that he's entirely out of the woods, they do at least provide a glimmer of hope for the athlete's family, friends, and fans, who have been desperately wishing for signs of improvement. And although a rep for Odom has asked that we respect his privacy and take all reports surrounding his condition with a grain of salt, it makes sense that so many feel invested in Odom's health and are hoping to continue hearing positive progress in his recovery.

Here are the updates on Odom's condition as of Sunday, Oct. 18:

According to E! News, Odom passed a swallow test on Saturday, a test which measures neurological function which means that he can now swallow on his own since his breathing tube has reportedly been removed.

In the same E! News report, it was claimed that Odom "was moved with assistance into a chair and his breathing showed no signs of distress." He's reportedly still wearing an oxygen mask, but is said to be breathing on his own.

However, His Communication Is Still Allegedly Limited To Non-Verbal Signals

While previous reports claimed that Odom had spoken to Khloe Kardashian out loud, new reports claim that his communication is still currently limited to non-verbal signals like thumbs up and thumbs down hand movements.

Kim Kardashian Has Offered Her Thoughts To Odom

Kardashian took to her Instagram and Twitter pages in the early hours of Sunday morning to post a photograph of herself with Odom and offer her continued prayers for his improvement.

Jenner, who initially accompanied Khloe to Las Vegas to be at Odom's bedside, posted an uplifting photograph and message early Sunday morning.

While Odom Is Reportedly Improving, Doctors Have Not Yet Assessed His Overall Health

According to TMZ, Odom's heart is improving, but doctors have yet to fully assess the effects that the strokes he reportedly experienced have had on his body, and several of his other organs are allegedly "causing problems."

Here's hoping that Odom is truly on the road to recovery. Bustle has reached out for comment in response to reports of Odom’s condition, but has not yet heard back.