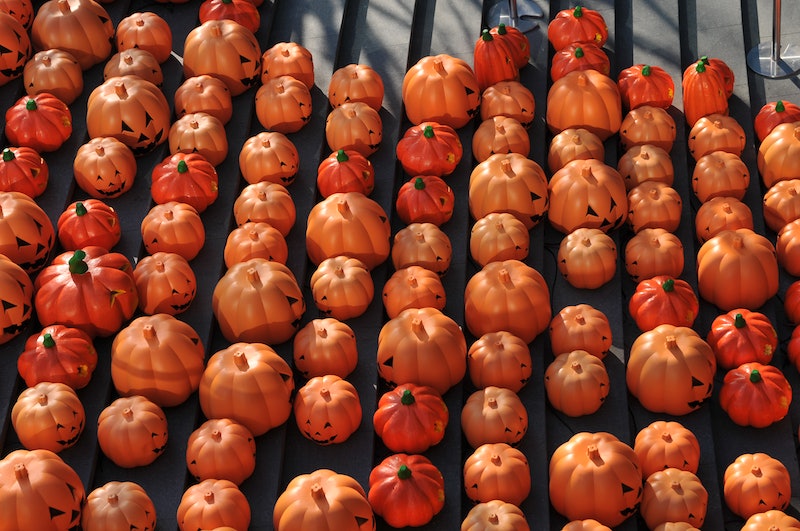 The weather is finally crisp, the leaves are changing color, horror flicks are playing in theaters, odd-looking pumpkins are popping up everywhere, and we’re all wondering what to dress up as this year. Yup! It’s Halloween, and people are going out of their way to be spooked. And I, for one, could not be happier. Who's with me?

There are many ghostly stories out there to scare yourself (fine, or others) with, but if you’re a scaredy-cat like me, you’ll avoid them like the plague. If horror movies, horror stories, and haunted houses are out of the question, don’t worry, there are other ways of getting into the Halloween spirit.

It might not seem like it, but Halloween is a great time to reread — or, OK, finally read — some great classics. Take my advice and stay in with a hot cup of cocoa and plunge into the eerie, all-encompassing world of a Gothic novel. It's the absolute perfect time, because although not horror stories per se, these 9 classic Gothic novels contain enough supernatural elements to get you into the Halloween spirit without getting spooked. And if you're easily chilled to the bone like me, that's just enough to get you going.

As a bonus, the luscious, bursting-at-the-seams prose and wild charms of Gothic lit is the perfect antidote to the pared down, understated prose that has become fashionable these days. These novels are filled with shady settings (usually gloomy castles or crumbling mansions — creepy, see!), murky plots, and sinister characters with deep dark secrets, topped off with supernatural events that may or may not be explained. This spooky season, jump into the eerie world of a classic Gothic novel like these:

The Mysteries of Udolpho by Ann Radcliffe

Ann Radcliffe was one of the most popular Gothic novelists of her time, and her fan base included the young Jane Austen (who would later write a novel satirizing the genre, Northanger Abbey — sound familiar?). The Mysteries of Udolpho was Radcliffe's most famous novel. The story takes place in a fictional castle in the shadow of the looming Apennine Mountains in Italy and is filled with sublime descriptions of the scenery. It tells the story of the young and innocent heroine, Emily St. Aubert, who must go to live with her aunt and her husband, the fiendish Signor Montoni, and suffer the supernatural terrors of the castle.

“When the mind has once begun to yield to the weakness of superstition, trifles impress it with the force of conviction."

The Hunchback of Notre Dame by Victor Hugo

The ultimate setting of a Gothic novel: a Gothic cathedral on the banks of the River Seine, with its gargoyle embellishments, dark towers and staircases. The French version of the book was called Notre-Dame de Paris, signifying its importance to the novel. In its vaulted bell tower, there lives Quasimodo, the hunchbacked bell ringer. By chance, he meets Esmerelda, a beautiful gypsy-dancer, who is the only person to show him compassion. But Quasimodo’s adopted "father," the sinister and lecherous Claude Frollo, is out for revenge against Esmerelda for rejecting his advances, and only Quasimodo can save her.

“all who possessed any wisdom regarded Quasimodo as the demon and Claude Frollo as the conjurer. It was obvious that the bell ringer had been engaged to serve the Archdeacon for a specific time, at the expiration of which he would be sure to steal his soul by way of payment.”

Great Expectations is not strictly a Gothic novel, but there are enough Gothic elements to land it on this list. Dickens’ fiction was realistic and fantastical in parts, and the world he creates in each of his novels is so utterly compelling that you can’t help but get pulled in. From the moment Magwitch terrorises Pip in the graveyard, to when he meets Miss Havisham in her ghostly house, the eeriness of Dickens’ prose and his strange, almost unearthly characters give this novel a spooky quality.

“dressed in rich materials — satins, and lace, and silks — all of white. Her shoes were white. And she had a long white veil dependent from her hair, and she had bridal flowers in her hair, but her hair was white.”

Jane Eyre is arguably the author’s most beloved novel. It tells the story of an orphan, Jane, who must live with her cruel Aunt Reed who, along with her children, constantly makes her feel unloved and inferior. Jane is soon sent off to a boarding school, and after that, gains employment as a governess. Despite her difficult life, Jane remains resilient, and kind. Eventually, she falls in love with her employer, the mysterious and rough-around-the-edges Edward Rochester. But Thornfield Hall is hiding a dark secret that threatens to destroy Jane’s happiness.

"It seemed, sir, a woman, tall and large, with thick and dark hair hanging long down her back. I know not what dress she had on: it was white and straight; but whether gown, sheet, or shroud, I cannot tell.”

Wuthering Heights was published only a few months after Jane Eyre. The novel takes place on the spooky Yorkshire moors. Its fragmented narrative is told from different points of view and adds to the strangeness of the plot. It centers on the lives of Catherine (or Cathy) and Heathcliff; the latter is adopted into Cathy's family from a young age. Heathcliff and Cathy’s love is the stuff of legendary Gothic romance, but the novel is as much about their love as it is about Heathcliff’s revenge. The novel will plunge you head-first into an exploration of an intense, transcendental love in all its destructive glory.

“I muttered, knocking my knuckles through the glass, and stretching an arm out to seize the importunate branch: instead of which, my fingers closed on the fingers of a little, ice-cold hand. The intense horror of nightmare came over me: I tried to draw back my arm, but the hand clung to it, and a most melancholy voice sobbed, "Let me in – let me in!”

The Woman in White by Wilkie Collins

Collins was a contemporary of Charles Dickens; the two were good friends. The novel is not set in a mysterious castle but in an oppressive country-house, Blackwater, bringing the action closer to home. The intricate plot line is filled with cliff hangers, and the novel is made up of a series of ‘witness statements’ of diverse characters as the reader tries to get to the bottom of the conspiracy at hand. Tied up with the central plot line is the mysterious woman in white, whose story unravels simultaneously.

“a solitary Woman, dressed from head to foot in white garments; her face bent in grave inquiry on mine, her hand pointing to the dark cloud over London, as I faced her.”

The Picture of Dorian Gray by Oscar Wilde

Oscar Wilde’s only novel explores the dark, private recesses that people were hiding behind their public faces in 19th century society in England. Wilde focuses on this double-life; Dorian is free to pursue his dark ambitions and forbidden pleasures while appearing acceptable, even attractive, to society. Only his portrait, which is hidden away, shows the destructive signs of his depravity, allowing Dorian to enjoy "the terrible pleasure of a double life.” In a particularly chilling scene, he arrives at a society party only 24 hours after committing murder.

“He had uttered a mad wish that he himself might remain young, and the portrait grow old; that his own beauty might be untarnished, and the face on the canvas bear the burden of his passions and his sins; that the painted image might be seared with the lines of suffering and thought, and that he might keep all the delicate bloom and loveliness of his then just conscious boyhood.”

The Phantom of the Opera by Gaston Leroux

This is the novel that inspired the iconic musical of the same name. Most of the action takes place in one of France’s grand opera houses and the novel is imbued with a spooky, supernatural atmosphere. It tells the story of Christine Daaé, a young opera singer who comes to the Opera House as an orphan and learns that it is haunted by a mysterious Phantom, who begins to make himself known to others in the opera house. Rumor has it, it was based on a true story.

“Last night I dreamt I went to Manderley again.” The opening line of this classic is one of the best in English fiction, and at once establishes the dream-like quality of the book. Rebecca never appears in the book; in fact, she died before the book begins, but it is in her haunting presence throughout the book (and in the life of her widower’s new wife, the new Mrs. de Winter, whose first name we never learn) that the strength of this novel lies.

“The house was a sepulchre, our fear and suffering lay buried in the ruins. There would be no resurrection.”

More like this
16 Novels That Paint A Realistic Portrait Of Abortion
By K.W. Colyard
13 Summer Solstice Quotes To Celebrate The Longest Day Of The Year
By Sadie Trombetta
10 Must-Read New Books Out This Week
By K.W. Colyard
Ottessa Moshfegh Is Happy To Be Your “It” Girl
By Arya Roshanian
Get Even More From Bustle — Sign Up For The Newsletter