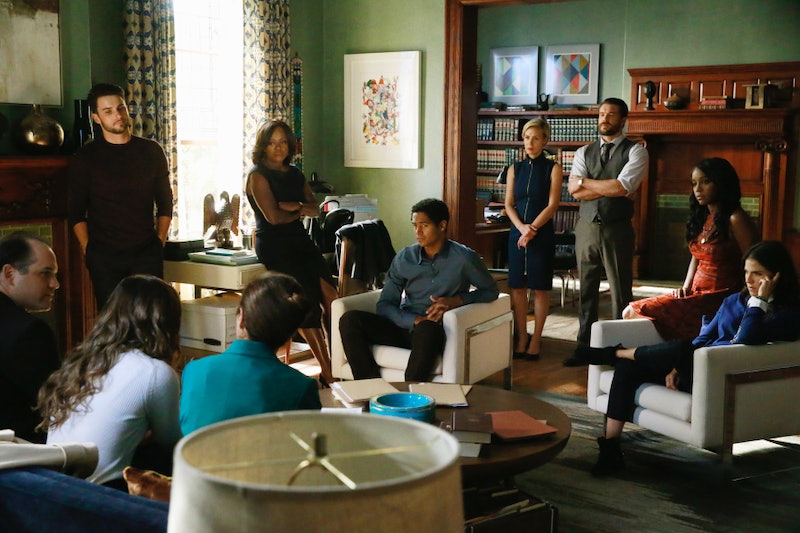 I don't care what Elle Woods said in Legally Blonde, law school looks like a lot of hard work, especially if you're a member of the Keating Five. I mean, forget about the stress that comes from term papers and final exams. These guys are now covering up multiple murders and lying (sometimes even to each other) on a daily basis. It's enough to make anyone pretty confused. Heck, I'm confused for the majority of each episode simply because so much is going on and there's still a great detail of information we have yet to uncover. Which is why I have some very important questions that How To Get Away With Murder Season 2 needs to answer ASAP.

Don't get me wrong, I enjoy and understand the fact that this series is complex and mysterious. It's one of the reasons that it's proven to be such an intriguing show. So when I say I want some questions answered, I don't necessarily mean right away. I just mean that there are certain topics and details that I eventually want to see the season circle back around to. When so much is unknown and everybody has something to hide, clarification is key. So while I'm more than willing to let the writers have their fun, let's just make sure that these particular questions don't go unanswered.

1. What Happened To Asher At Trotter Lake?

Asher may not have been apart of Sam Keating's deathly cover up, but this guy has got his own share of shady skeletons in the closet — one of which involves something that happened at Trotter Lake with Tiffany. We have yet to know any specific details, but if it was enough for Asher to turn Annalise in and become the prosecutor's secret mole, then you just know it has to be something big. Don't leave us hanging for too long, writers!

2. What's The Deal With Bonnie's Past?

Bonnie has mentioned multiple times this season about how Annalise "saved" her by making her a member of the Keating team. What exactly did Bonnie need saving from? What was her life like before she became so devotedly loyal to Annalise? I'd love to learn more and peel back yet another layer to this already complex character.

3. Who Is The "She" Caleb Is Worried About In The Flash Forward?

When Michaela goes to visit Caleb shortly after abandoning a severely wounded Annalise, he immediately asks her if "she" is OK. But who is this "she" that he's referring to? It could be Annalise, though, I doubt that would warrant so much concern coming from him, unless they somehow end up getting extremely close throughout the case. I'm thinking this could be in reference to his sister, Catherine, who is noticeably MIA throughout these flash forwards. But if that's the case, then where is she and how does her absence fit in with this latest murder mystery? I need to know!

I've sensed an underlying sexual attraction between these two since Day 1, but does anything ever become of it? I can't help but be slightly curious.

5. Where Is Rebecca's Body Buried?

After discovering that the brother of Frank's high school classmate owns a cemetery, Wes and Levi become convinced that Rebecca's body is buried somewhere within that hallowed ground. But was Frank really that sloppy? Will we ever find Rebecca's final resting place? Anything could happen at this point, but, for now, happy digging, boys! (I am so glad I'm not you right now.)

And finally, the most obvious and pressing question of the season. We know that Annalise has been shot, but who pulled the trigger? This woman has made many enemies throughout the years, so anyone could have the proper motive to want her dead. But I'm guessing that it's definitely someone we know. Perhaps even someone we trust. But who? I'm seriously dying to know.