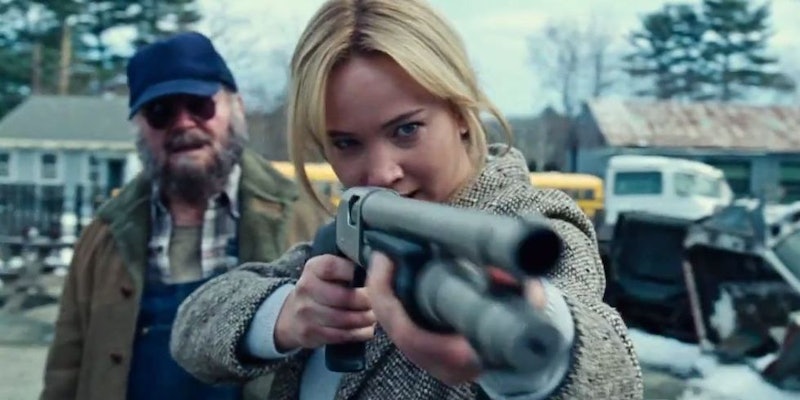 Meryl Streep is the undisputed star of the silver screen. Hollywood has produced no shortage of acting legends, from Bette Davis to Katharine Hepburn to Elizabeth Taylor to Jane Fonda. But no one has been more lauded than Streep, who has an astounding 19 Academy Award nominations under her belt... and shows no signs of slowing down. However, she better watch her back, because young Jennifer Lawrence is already gunning for her title, if the trailer for Lawrence's new film Joy is any indication.

To be sure, Lawrence is nowhere close to catching up to Streep's record number of nominations — but considering the 66 year old Streep had a four-decade head start on the 24 year old Lawrence, that's no surprise. However, there's plenty of evidence to support the statement that "Jennifer Lawrence is the new Meryl Streep," including the fact that the Hunger Games star was, at 23, the youngest person in history to reach three Oscar nominations. In comparison, Streep was 29 when she received her first nom for her role in 1978's Best Picture-winning The Deer Hunter.

If Lawrence's third collaboration with director David O. Russell bears the same fruit as their first two (which account for two of her three nods), then she's looking at being a four-time nominee before she's even a quarter of a century old. Considering the trailer for Joy is reminiscent of the kind of film Streep might have made when she was Lawrence's age, this is a very real possibility.

Here are nine ways the Joy trailer proves that Lawrence is following closely in Streep's footsteps.

Joy is based on the life of Joy Mangano, inventor of the Miracle Mop and founder of Ingenious Designs, LLC. The film will follow Joy from young girl to successful businesswoman and, since the real Mangano graduated from Pace University in 1978, the bulk of Joy will take place in the same time period of Streep's earlier movies like The Deer Hunter, Manhattan, and Kramer Vs. Kramer.

In her early-to-mid career, Streep was infamous for grand, sweeping romantic dramas like The French Lieutenant's Woman, Falling In Love, Out Of Africa, and The Bridges Of Madison County. The trailer's focus on Lawrence's relationship with co-star Edgar Ramirez hints that Joy will have its fair share of romance as well.

One of the things that makes Streep so uniquely relatable for such a high-profile star is that she never seems to take herself too seriously. Between her heavier roles, she often likes to cut loose and make a film that shows off her comedic side, like She-Devil or Death Becomes Her or The Devil Wears Prada. While Joy seems to focus on Lawrence's more dramatic side, the trailer does show a few light-hearted moments — and we all know that Lawrence shares a self-effacing attitude with Streep in real life.

Of course, when Streep isn't making romances or comedies, she's ripping our hearts out with tear-jerking dramas. She excels at playing characters with deep emotional wounds, like The Hours' Clarissa, Ironweed's Helen, and — most iconically — the title character in Sophie's Choice, the role that won Streep her first Lead Actress Oscar. Joy looks similarly primed to delve into the emotional turmoil of its protagonist's inner life.

Whether she's playing the older or younger generation, many Streep movies tackle the fraught relationship between mothers and their children: Kramer Vs. Kramer, Postcards From The Edge, One True Thing, August: Osage County, Into The Woods. The trailer for Joy opens with a voiceover from the title character's mother to her young daughter, clearly indicating that this movie will bear much in common with those Streep titles.

Sure, trumpeting that your film contains a "strong female character" has become de rigueur these days, but Streep perfected the archetype almost four decades ago — and consistently transcends it by showing the complex layers of insecurities and vulnerabilities that lie just underneath the steely of these "strong women" like The Devil Wears Prada's Miranda Priestly, Doubt's Sister Aloysius, and The Iron Lady's Margaret Thatcher. Lawrence's Oscar-winning role in Silver Linings Playbook may have hewed closer to the "insecure" side of the spectrum, but Joy looks to be a perfect balance. She, like Sister Aloysius, has certainly mastered the "don't mess with me" face.

More than the general "strong woman" archetype, Lawrence's Joy looks to share something very specific with a couple of Streep's recent roles: her sense of entrepreneurship. Whether it's Runway magazine in The Devil Wears Prada, The Joy Of Cooking in Julie & Julia, or Ingenious Designs in Joy, these women all know how to build something successful and long-lasting from the ground up.

Joy will be Lawrence's third time working with director David O. Russell and co-stars Bradley Cooper and Robert De Niro, after Silver Linings Playbook and American Hustle. Streep would also frequently collaborate with the same artists: she appeared in three films with De Niro (The Deer Hunter, Falling In Love, and Marvin's Room), and worked with director Mike Nichols four times (Silkwood, Heartburn, Postcards From The Edge, and HBO's Angels In America).

More than romance, more than comedy, more than mommy issues, what signifies a truly legendary Meryl Streep performance is one based on a true story. She won her third Oscar for playing Prime Minister Margaret Thatcher in The Iron Lady, and her other real-life roles have included Karen Silkwood (Silkwood), Karen Blixen (Out Of Africa), Lindy Chamberlain (A Cry In The Dark), Roberta Guaspari (Music Of The Heart), Julia Childs (Julie & Julia), and Emmeline Pankhurst (in the upcoming Suffragette ). Shockingly, although she has played YA heroines and blue mutants, this will be Lawrence's first time portraying a real-life figure... unless you count Rosalyn Rosenfeld (her character in American Hustle) which was very loosely based on a woman named Cynthia Marie Weinberg. (As the film itself proclaimed in an opening title card, "Some of this actually happened.")

Will Joy signal J. Law's official status as "the new Meryl"? We'll see when the film opens this Christmas. But if these two promising minutes of footage are any indication, the answer will be a resounding yes.

More like this
5 Wild Theories About Miley Cyrus’ “Flowers” Music Video
By Jake Viswanath
Jennifer Coolidge Hunted For Jewels & Lashes In J.Lo’s Hotel Room
By Jake Viswanath
Twitter Is Identifying With Sally Field & Jane Fonda’s Friendship In New Viral Video
By Jake Viswanath
This Pre-'Love Island' Video Of Olivia & Zara Together Changes Everything
By Bustle UK
Get Even More From Bustle — Sign Up For The Newsletter
From hair trends to relationship advice, our daily newsletter has everything you need to sound like a person who’s on TikTok, even if you aren’t.