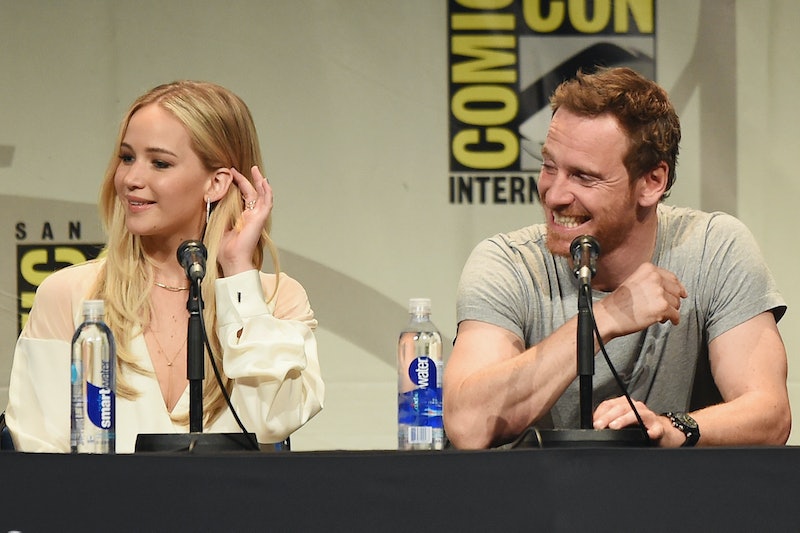 After Jennifer Lawrence's recent essay on how her salary compares to her co-stars', there's one question on everyone's mind of late: Is the gender pay gap closing? Women have been making small but steady gains in income over the last few decades, but we never seemed to catch up to our male counterparts. Even last year, when the discrepancy between male and female income was the smallest on record since the Equal Pay Act of 1963, women still earned a paltry 79 percent of what their male coworkers received — and yet we still celebrated, because it looked as if the end of the income gap was in sight.

Unfortunately, this year's data from the Labor Department brings that line of thought to a screeching halt. According to the Wall Street Journal, men's incomes are increasing at more than twice the rate of women's, and they have done so for three quarters in a row. While this quarter has seen a 2.2 percent increase in men's earnings, women's wages have risen just 0.8 percent. As a result, the decades-long narrowing of the income gap has stalled out.

As if that wasn't infuriating enough, the WSJ also notes that the difference between this year and last year's income gap is largely due to changes in male income, not any significant gains for women. "The gap... narrowed during most of the current economic expansion," they write. "But that was largely because male earnings were weak — declining in five quarters between 2010 and 2014 — and women mostly saw modest gains."

According to the WSJ, the growing gap is partly due to a rise in pay for professional fields like doctors, lawyers, and engineers; for men, these high-pay fields saw an increase in income of more than seven percent. In contrast, the rise in income for women in the same professions was just above two percent, even though they make up an increasing number of the workforce.

In fact, women aren't just getting out and working in larger numbers — they're earning more college and graduate degrees, making their way into high-paying technical jobs, and becoming the primary breadwinners in many American households. In spite of all this, however, they still lag behind men in terms of earnings for virtually every occupation, even in places where you wouldn't expect sexism to rear its ugly, condescending head. Everyone from CEOs to fast food workers to American sweetheart Jennifer Lawrence is affected by the income gap.

This, of course, prompts the question of why the income gap exists, but there's no easy answer. According to pay gap "nonbelievers," so to speak, the difference in men and women's earnings can be explained away by motherhood: maternity leave, choosing fewer hours to spend more time with children, etc. Although women are more likely to take time off for their families, this attitude places the blame squarely on women for their own lower incomes — as if we want to have to earn an extra degree to make as much as men over our lifetimes. Obviously, there is more at play here.

One hugely important factor is that professions dominated by women simply aren't paid as much as male-heavy occupations. According to research, women make up more than half of the workers in the 20 lowest-paying jobs in America, but they're only 29 percent of the top 20 highest-paying. Historically, as women move into a field, that occupation mysteriously becomes less respectable; for instance, administrative work is seen as a "fluff" job these days, even though in the past, it was actually dominated by men. Even when women do make their way into traditionally male positions, they're perceived as less capable, especially when they dare to have children — despite the fact that fathers do just fine in the workplace.

Clearly, this problem isn't going away on its own. Luckily, women are becoming increasingly vocal about demanding the same wages as their male coworkers, and even the White House acknowledges equal pay as an issue. This time next year, let's hope we have better news.