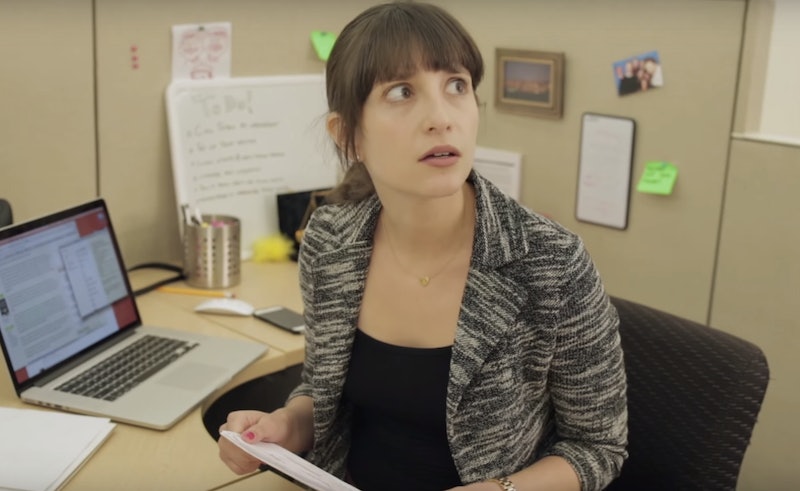 A new video from Buzzfeed Yellow hilariously chronicles a woman discovering the gender wage gap. Her response to discovering that she only earns 78 percent of what her male colleagues earn is simple: she’ll only do 78 percent of her work. Easy! The video is a perfect way to help us gear up for Equal Pay Day on April 14, a day that commemorates how long it takes for the average woman to earn what an man earned during the last calendar year. The video begins with a woman realizing that she makes less money than her male coworker, who has the same job. To be exact, she makes 78 percent of his salary. The only way for that disparity to be fair, she reasons, is to only perform that percentage of her job — literally. That means collecting four out of five folders, participating in hour-long conference calls for only 47 minutes, and trailing off during meetings when she’s said 78 percent of what she has to say. Hey, the math adds up, guys.

I fully support the intentions behind this video. It’s ludicrous that in 2015 women still routinely make less money than men – but it’s important to note that the gender wage gap is a lot more complicated than this video and its “78 percent” statistic suggest. “78 percent” (and sometimes, alternatively “77 percent”) are numbers that get thrown around a lot when people talk about the wage gap. For example, at the 2014 State of the Union Address, President Obama said, “You know, today, women make up about half our workforce, but they still make 77 cents for every dollar a man earns. That is wrong, and in 2014, it’s an embarrassment.” That number is often casually interpreted to refer to situations just like the one presented in the Buzzfeed video, in which a woman is paid less than what a man gets paid for doing the exact same job. But, in reality, the statistic refers to a study by the Bureau of Labor Department, analyzing the average pay of women and men both working full-time, but not taking into account profession, education, or experience.

As Natasha Geiling, writing for Bustle, points out, “77 percent” fails to get at the deep, systemic problems that lay at the heart of the wage gap. Geiling writes, “Women earn less money over the course of their lifetime because they work fewer hours and lower paying jobs, two huge issues that suggest chronic failures in our society.” So the problem is not so much that women make less than men in the same jobs (although that does still happen), but that, for many reasons, women end up in fields that pay less than those dominated by men (women fill only a quarter of all STEM jobs in the US, for example). Women also work fewer hours over their lifetimes than men, largely because they bear the brunt of childcare duties, even when they’re working.

I’m not at all trying to trash this video, but it’s important to make this distinction because, by oversimplifying how the wage gap works, we risk oversimplifying how to combat it. It’s one thing to say, “I demand to be paid the same as my equally-qualified and experienced male colleague who has the same job as me,” but quite another to take on the much more subtle and deeply embedded issues that keep many women out of STEM and other lucrative fields, and lead them bear a disproportionate responsibility to childcare and domestic obligations. Of course women need to demand equal pay in the jobs they’re already in, but we also need to fix the more complex problems at the core of a broken system.