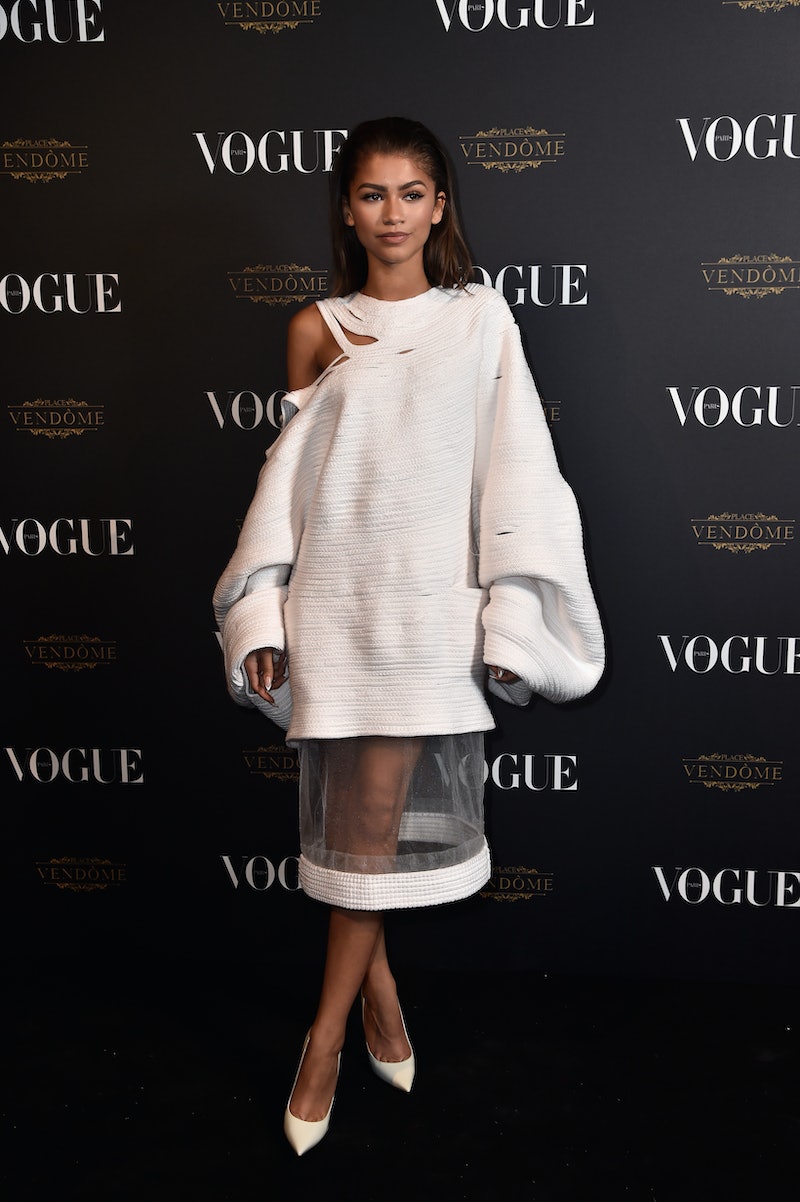 Yet another Photoshop controversy is now circulating the internet. Modeliste magazine allegedly retouched pictures of Zendaya in the latest issue, and the Disney Channel actress was not happy about it. The 19-year-old took to Instagram on Tuesday to speak out against the alleged Photoshopping, posting a picture of the edited image that was reportedly set to run in the mag's latest issue alongside the original photo. The side-by-side view makes it pretty clear to see how different her legs and torso look in each of the images. The magazine issued a response saying that they are currently working with Zendaya to publish the un-edited photos and are holding the issue until both parties are satisfied.

The songstress expressed her thoughts in her Instagram caption, writing, "Had a new shoot come out today and was shocked when I found my 19 year old hips and torso quite manipulated. These are the things that make women self conscious, that create the unrealistic ideals of beauty that we have. Anyone who knows who I am knows I stand for honest and pure self love. So I took it upon myself to release the real pic (right side) and I love it😍😘 Thank you @modelistemagazine for pulling down the images and fixing this retouch issue."

Bustle reached out to Modeliste for comment and they sent us the following response:

We will be releasing the full set of un-retouched images later today in the digital version of the magazine at www.ModelisteMagazine.com and would be happy to discuss any image rights use once those are published on our own platforms.

A Letter From The Editor will also be included in today's Modeliste issue with Zendaya on the cover, and the letter will address the positive collaboration between the magazine and Zendaya and her team that led up to the images you are inquiring about.

The mag ultimately decided to temporarily hold the issue's release with the editor's letter and took to Instagram to issue the following comment:

We had a wonderful collaborative photoshoot with Zendaya as well as members of her creative team and family for Modeliste's Cover and fashion spread. We understand that re-touching of photos is a sensitive subject not only in the fashion industry but across all media. Upon reviewing edited images in comparison with the originals, Modeliste Editor-in-Chief, Amy McCabe jointly with Zendaya and her parents made the immediate decision to pull the issue and are working with Zendaya at her request to publish the complete un-edited and authentic images from our Cover shoot in Puerto Vallarta. We stand to represent and advocate a message of positive body image, self love, and embracing all aspects of individuality, natural beauty and the empowerment of women. Please stay tuned for more information to come from our Editor-in-Chief as well as the full set of unedited and un-retouched images which will be released later today on www.modelistemagazine.com.

It sounds like there is no bad blood between the singer and the publication, so at least this story has a happy ending!

It's awesome to see the singer standing up for what she believes in and for encouraging women to love themselves exactly as they are. Let's take a look at some other times Zendaya was a body positive role model.

1. When She Encouraged Tall Fans To Wear Heels

Back in May she toldPeople, "I always tell my fans that people are going to comment on your height regardless, so you might as well be as tall as possible and look good doing it!"

2. When She Said Ugly Doesn't Exist

Zendaya made a powerful statement when she was filmed leaving the airport earlier this month, saying “Nobody’s ugly. That doesn’t exist. I say, take the time to get to know who you are. Take the time to love yourself, and everything will be all right.”

3. When She Went Makeup Free

The singer actually goes makeup-free on social media from time to time, but this video is a particularly powerful instance.

4. When She Defended Her Parents

According to HollywoodLife, Zendaya spoke out against people who posted rude comments about her parents on social media, writing, “While you’re so concerned about what my parents look like, please know that these are two of the most selfless people in the world. They have chosen to spend their entire life, not worried about trivial things such as looks and insulting people’s parents on Twitter, but instead became educators who have dedicate their lives to teaching, cultivating and filling young shallow minds.”