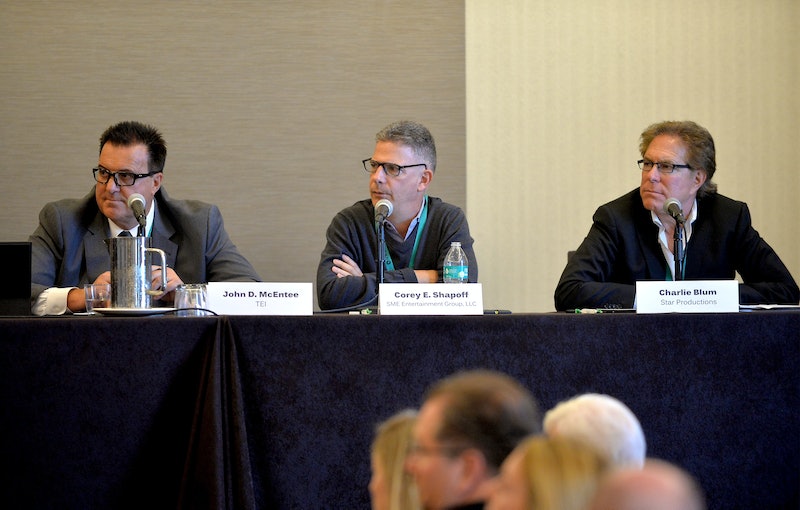 Often, when people put together a panel — or a syllabus, or a compilation, or any other list of important names — they often claim that the overrepresentation of straight, white men isn't an issue of discrimination; it's just "how things happened to work out." Now, a mathematician says the odds of having an all-male panel are actually pretty astronomically unlikely, even in male dominated fields. So the idea that it's something that "naturally happens" — and that happens over and over and over again — is just wrong, and we have the numbers to prove it.

In a paper discussing the odds of having relatively few women in a panel (the breakdown for which can be found here), Greg Martin explains that a panel made up entirely of men or almost entirely of men is actually incredibly unlikely, mathematically speaking. In fact, having only one female speaker out of 20 — as was the case at a recent math conference — defies the odds even in a male-dominated field. Using the rather conservative figure that about 24 percent of all math Ph.Ds are awarded to women (meaning women make up about 24 percent of all math experts), Martin calculated that, just using random chance, the odds of a panel being made of 19 men and one woman is about three percent. The odds of women being slightly overrepresented — five women out of 20, in this example — are actually about 18 times greater.

In other words, if you let random chance determine your speaker line up, it's probably not going to be made up of 19 dudes and one women. Kinds of casts an unflattering light on all the people who say that male-dominated line-ups "just happened that way" on their own, doesn't it?

Martin himself explained the situation pretty clearly in an interview with the Atlantic:

If conference speakers were being chosen by a system that treated gender fairly (which is to say, gender was never a factor at all), then in any conference with over 10 speakers, say, it would be extremely rare to have no female speakers at all — less than five percent chance, depending on one’s assumption about the percentage of women in mathematics as a whole.

Turning that statement around, we conclude that any such conference without any female speakers must have come into being in a system that does not treat gender fairly.

And that's just in math, a field that, for various reasons, actually does have a male majority. Imagine the absurd odds of having an entirely male line up in a field that's gender equal. It's not something that "just happens" — it's something people make happen. And they make it happen all the time, as the

Moreover, the same can also be said of factors like race or sexuality. Having an all-white panel or an all-straight panel is also not something that "just happens" because of some sort of mythical law of averages.

We've all been raised to see certain people as default — specifically straight, white, middle-class men — and we therefore assume that seeing those people in massive numbers is somehow natural. After all, that's what we're used to seeing. But the numbers don't lie. The over-representation of men, or white people, or straight people isn't something that occurs on its own. It's something that's artificially created by people. And it's about time we stopped pretending otherwise.