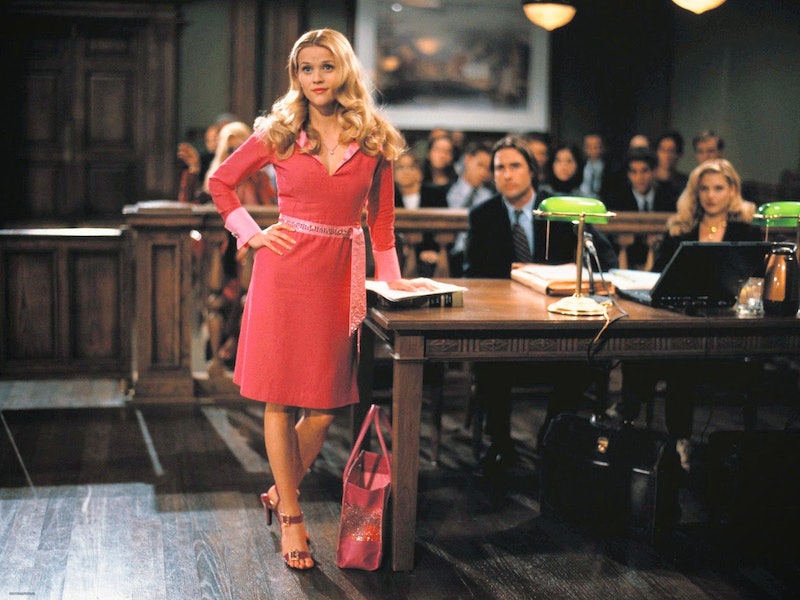 I'm not even going to bother to pretend that I am the only person who grew up idolizing Elle Woods from Legally Blonde, but I am probably the only person who grew up hoping and praying we would one day see some sort of continuation of her adventures. Oh, sorry, what is that you're saying? Legally Blonde 2: Red, White, and Blonde? Yes, well, that aside, never has the world been more ready for lawyer-turned-politician Elle Woods than in 2015, when Hillary Clinton has declared her intention of running for president for the second time, paving the way for fictional feminists like Elle Woods to shatter through that glass ceiling. And that's exactly how the woman behind the woman feels. During an interview with Rachel Zoe on Lifetime's Fashionably Late With Rachel Zoe, Reese Witherspoon talks about Legally Blonde 3's potential of being made, and what she thinks Elle would be up to now. The answer? President.

"I actually think it's kind of great right now because we're talking about women in politics and how important that is to get more women," Witherspoon said. "I think it'd be kind of a cool thing to have her be Supreme Court Justice, or someone who runs for office. President." So, basically, forget about Kanye 2020; we should all be rooting for Elle Woods 2020.

Legally Blonde existed in a world where the whole point of the premise was that people thought it was ludicrous that an ultra-feminine, beauty-obsessed, blue-eyed, pink-wearing blonde could not only get into Harvard but also graduate with honors and succeed as a lawyer. Now, we're living in the world where that same blonde would probably get laughed out of the White House, as partially explored by Legally Blonde 2 — and that is an excellent concept to build off of and expand for Legally Blonde 3. Elle was just lobbying for animal rights in Legally Blonde 2, but running for president? After seeing her application video to Harvard, is there anyone out there who doubts that Elle would literally redefine acceptable methods of campaigning for votes?

Of course, Witherspoon being interested in a third film doesn't mean that we'll get one, but the fact that she loves and understands Elle as much as we do is totally heartwarming. But, what, like it's hard? Check out the clip before, and make sure to watch the full interview on Fashionably Late With Rachel Zoe at 10:30 p.m. on Thursday on Lifetime.

More like this
Reese Witherspoon Gave Fans Hope For 'Legally Blonde 3' After This Surprising Movie Inspired Her
By Jake Viswanath
Christina Aguilera Took A Powerful Stand At Brighton Pride
By Sam Ramsden
Are John Legend & Kanye West Still Friends? The Singer’s Latest Update Is Candid
By Brad Witter
Beyoncé & Madonna’s “Break My Soul” Remix Honors A Group Of Black Icons
By Stephanie Topacio Long
Get Even More From Bustle — Sign Up For The Newsletter