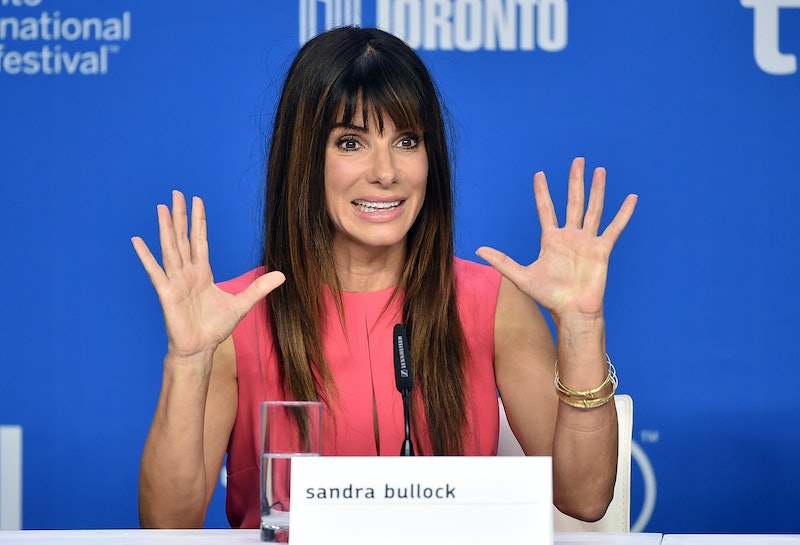 The new movie Our Brand is Crisis finds Sandra Bullock as a former political consultant who comes out of retirement to help an unpopular Bolivian politician in his campaign for the 2002 presidential collection. The film, which is based on the 2005 documentary of the same name, has received mixed reviews from critics so far. Bullock's performance, though, is already being praised... so could Sandra Bullock win an Oscar for Our Brand Is Crisis?

Several critics seem to think so. Reviewer Benjamin Lee wrote in The Guardian that although the film is lacking in some areas, Bullock's performance saves the day. He commented, "as a carefully orchestrated campaign to win her another Oscar, it’s a success." Variety's award editor Tim Gray similarly reported that "the best actress Oscar race has more serious contenders than usual, but Bullock’s stellar turn is certainly a hot contender." Forbes contributor Scott Mendelson echoed this sentiment in his analysis of Our Brand is Crisis, saying that the Warner Brothers film is undoubtedly gunning for Oscar nominations and "Bullock is the key component of Warner’s awards race." This isn't the first time that the actress has been an Oscar contender, and it certainly isn't the first time that her performance has been the highlight of a film.

Here are a few standout roles that helped cement Bullock's position as one of the most respected dramatic actresses in Hollywood.

This emotional movie won Bullock her first (and as of yet, only) Oscar. On an equally important note: who would've known that Sandy would look so good as a blonde?

The privileged housewife played by Bullock was one of many characters whose lives intertwined in this film, which won the 2004 Oscar for Best Picture.

Bullock's portrayal of an engineer stranded in space earned her a second Oscar Nomination for Best Actress. Although she didn't win the statue, the actress won a paycheck for Gravity that was almost as impressive as her performance.

This action thriller was a commercial success and therefore helped to bolster Bullock's growing career. She was also praised by critics as the stand out performer in a film that featured many other big names, including Keanu Reeves and Jeff Daniels.

With such an impressive repertoire of previous roles, it's no surprise that Bullock is once again being recognized for her talents in Our Brand Is Crisis. However, 2015 saw many other amazing female performances in cinema, so it's hard to determine who will make the cut for an Oscar Nomination. You can judge for yourself if Bullock's performance is Oscar-worthy by seeing Our Brand is Crisis on October 30.