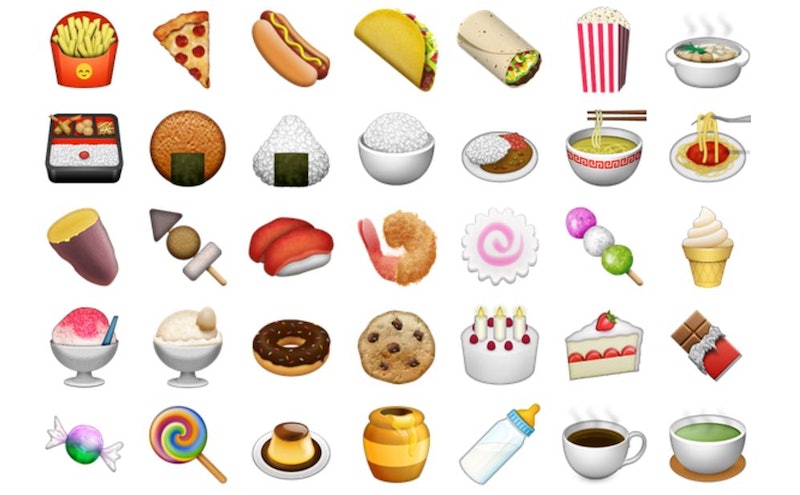 The Internet pretty much never gets tired of hearing about emoji, but keen interest about every aspect of these adorable little pictograms always spikes when something new comes along. As such, it shouldn't be a surprise that the new iOS 9.1 emoji brought more to the party than just a couple of tacos. This time, it also brought this unexpectedly fascinating query: What's the plural of “emoji?” Is it “emojis?” Or is it “emoji,” the same way the plural of “moose” is also “moose?”

Happily, this question is actually a pretty easy one to answer, thanks to the thoroughness of the Emojipedia (aka the world's greatest resource for all things emoji). In short: “Emoji” and “emojis” are both acceptable in written English. Which one you go with, though? Well… that's a slightly more complicated conundrum.

According to the Oxford Dictionaries, the word “emoji” itself comes from the Japanese words “e,” or “picture,” and “moji,” or “character/letter.” I'm not terribly well versed in Japanese as a language, but as I understand it, the plural of “moji” is also "moji" — hence the plural of “emoji” in Japanese being “emoji” as well. Given the ubiquitous little pictures' origins, it would be understandable if you wanted to stick with “emoji.” (For what it's worth, "emoji" is my personal preference.)

However, in American English, the case is usually made for “emojis.” When Matthew Kassel dove into the topic of the word's plural for for the New York Observer in November of 2014, he discovered that most language experts opt for adding the “s.” The Associated Press Stylebook, for example, declared in March of 2013 that “emojis” was the way to go — but I still can't help but wonder, why? It's such an arbitrary choice, so what makes one option better than the other?

Kassel also spoke to copy editor Mark Allen, who is a board member of the American Copy Editors Society, in order to get to the bottom of it. Said Allen, “When words enter English, we usually make them play by our rules, so I think 'emojis' has the edge. A corollary might be the Japanese word 'tsunami.' We're more likely to speak of 'a series of tsunamis' rather than 'a series of tsunami.'”

Ultimately it all has to do with how languages evolve. I would argue that “emojis” is technically incorrect; the word isn't an English word, so there's no reason why it should have to play by English rules. But if enough people use an incorrect word form, and they use it frequently enough, does it then become correct anyway? I suspect the answer is yes; once a word enters the lexicon, it legitimizes itself, even if it's a bastardization of a different word. That's how interesting etymologies happen — for example, the name “Augustine” becoming “Austin” over time.

In conclusion, the answer to the question of emoji plurality is ultimately, "use whichever one you like the most." Your call, everyone!