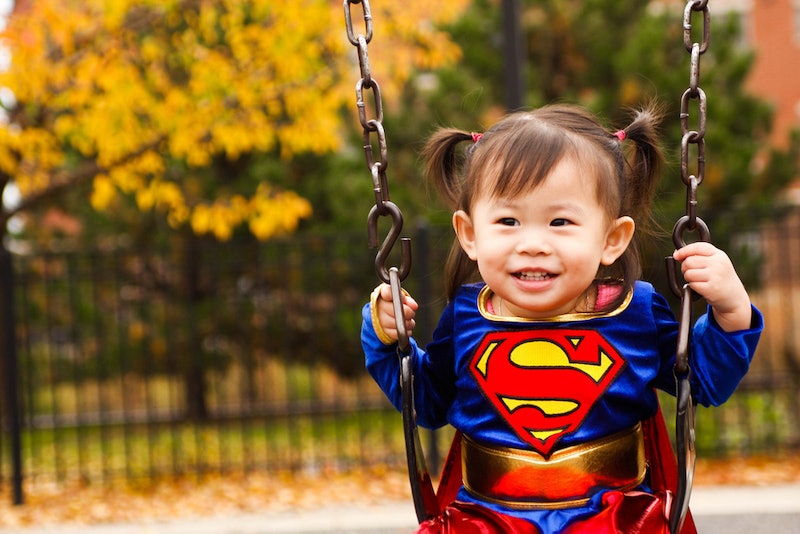 Does anyone else find baby name data weirdly fascinating? Because I sure do. Given the fact that I also have a proclivity for waxing nostalgic about days gone by, it therefore shouldn't be surprising that the topic of “popular baby names from the '90s we should definitely name our children today” is one I frequently think about — even though I'm not even sure I want children. I just really like names, OK?

I compiled my list by looking at data from the Social Security Administration detailing the top 200 boys' and girls' names between 1990 and 1999. For the curious, the rankings were drawn from enormous pools. Writes the SSA: “The 200 most popular names were taken from a universe that includes 20,545,048 male births and 19,639,350 female births.” Yowza.

One thing you'll notice about my list: A lot of the names on it, though popular in the '90s according to the data, weren't necessarily the most popular back then. This is mostly because I purposefully stayed out of the top 10 or so, largely because those names have really never gone out of style. We all know a ton of Michaels and Jessicas, right? Not that there is anything wrong with being a Michael or a Jessica — they just also ranked highly for a number of different decades, making them not entirely unique to the '90s. But if you go a little further down the top 200, you can find loads of names that were both popular for babies in the 1990s and are not as commonly encountered today. And yes, my own aesthetic played into my choices a little, too; they're all names that I think are kind of cool.

(Why yes, I am one of those people who spends an embarrassing amount of my own free time looking up the meaning of names just because I think it's fun. Why do you ask?)

Anyhoo, here are 15 popular '90s names which I think are worth bringing back. Anyone have any to add?

We all knew at least one Courtney, right? I knew two or three; we differentiated them via their last names. Of course, in the grand scheme of things, two or three Courtneys is small potatoes — 113,275 babies named Courtney came to be during the decade.

There were 225,243 Zacharys (Zacharies?) born in the '90s. If you want to go for the “I named my child after something I liked in the '90s” angle, you can always tell people that you chose the name because of Zachery Ty Bryan. Or if you want to get really old-fashioned, go for Thackery (as in Binx) instead.

Logan is generally considered a boy's name, but the beauty of it is that it's gender-neutral. I mean, personally I'm of the belief that any name is gender-neutral if you want it to be. But in any case, 63,557 boys named Logan came into the world between 1990 and 1999, so … yeah. Do with that what you will.

71,618 children who are not actually flowering plants graced the United States during the '90s. Fun fact: The Ericaceae family of plants survive well in conditions other plants might find punishing — so although the heather plant sounds soft and pretty, it's also tough and badass.

Meaning: Someone who hunts. English.

Another excellent gender-neutral selection, the 144,719 boy Jordans and 61,742 girl Jordans who were born in the '90s all share their name with the almighty River Jordan — hence the meaning of the name.

Although it was most commonly encountered as a girl's name (32,883 times in the '90s, to be precise), Whitney is also gender-neutral. It's derived from an Old English place name.

Things I learned today include the fact that Austin is a medieval contracted form of Augustine. 190,110 '90s kids bore the name.

There are a ton of alternative spellings for this one, including Briana and Breanna. When you put 'em all together, a whopping 181,907 babies with some variation on the name came into being in the 1990s.

It's nice to see so many gender-neutral names on the list, isn't it? Although I think the trend has been gaining steam recently, it's clearly not a new one, which is kind of encouraging. 81,118 boys named Cameron were born in the '90s, a figure which I consider to be a neat little bonus. Why? Because the number is a palindrome, and palindromes are awesome.

Meaning: Actually this one has a pretty interesting etymology. Yes, it comes partially from “page” (as in a type of servant) in Middle English, but it's ultimately derived from a Greek word via Old French and Italian which means “little boy.” Admittedly, the idea of giving someone (especially someone who will grow up to be a woman) a name that means “servant” is troublesome. When we trace it all the way back, though, I find it to be pretty boundary-breaking.

Also, embarrassing confession time: My first exposure to the name Paige was through the comic strip FoxTrot — which meant that for years, I had only read the name and never heard it spoken aloud. Consequently, I thought it was pronounced “Peg” for an unfortunate amount of time. My apologies to the 50,548 Paiges who were born in the '90s.

Like Whitney, Morgan is more common as a girl's name — there were 91,179 babies assigned female at birth who were given it in the '90s. But guess what? Yep, It's also gender-neutral. Go team!