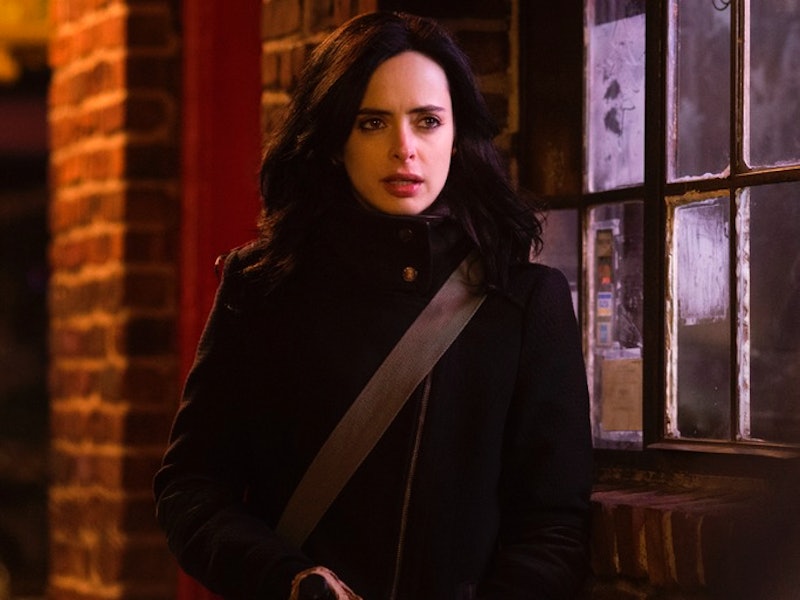 The heart-pumping, adrenaline-inducting super trailer for Netflix's Jessica Jones is here and it does not disappoint. We've already seen a super teaser trailer and a lucky few have seen a sneak-peek of the series' first episode, but now the general public got their first look at Marvel's latest gritty hero. After watching it, I only have one question on my mind: "What song is in the Jessica Jones trailer?"

If you are anything like me, you have already watched and re-watched the trailer several times. I have no shame about this fact — the show looks amazing, and I totally intend on re-watching the trailer 30 more times before Jessica Jones premieres on Nov. 20.

At first, I didn't even notice the music. There was just too much vital information to absorb. Jessica Jones can stop cars! OK, she can only stop slow moving cars, but hey, that's more than I can do. Plus, Jones can fly! She loves booze! She might be the coolest superhero to hit the small screen in years, and with this being the first full-length trailer for the series, Jessica Jones' backstory is finally beginning to take shape — I already love it.

Check out the trailer below for yourself, and try to pull yourself away from the awesome action long enough to listen to the music playing over it.

Did you hear it? Behind the city sounds and biting dialogue between Krysten Ritter's Jessica and Mike Colter's Luke Cage, there is Of Monsters and Men's "Thousand Eyes." The song is haunting and pitch-perfect, helping set a dark and mysterious tone for the trailer.

"Thousand Eyes" is from the alt-folk-rockers' second album, Beneath the Skin, and was released in June 2015. It sounded familiar, but I couldn't put my finger on where I had heard it before until I realized the song has appeared in snippets in the previous Jessica Jones teasers! Now audiences can enjoy much more of the song and a longer look at Jessica Jones, helping to pass the time until it finally hits Netflix on Nov. 20.

Here is the song in full, but be warned, it will definitely be stuck in your head for a while.

I'm so glad that the trailer not only gave us a glimpse into how the Netflix series will look and feel, but also how it will sound. If the trailer is any indication, my Spotify playlist is about to come cluttered with songs from Jessica Jones.

More like this
Nicola Coughlan Shared A Lady Whistledown Excerpt From ‘Bridgerton’ Season 3
By Grace Wehniainen, Alyssa Lapid and Sam Ramsden
Kate Bush Revealed The Real Meaning Behind 'Running Up That Hill' Lyrics
By Darshita Goyal
Here’s Everything Coming To & Leaving Netflix In October
By Jake Viswanath
What’s New On Netflix: Meet 'The Real Bling Ring'
By Arya Roshanian
Get Even More From Bustle — Sign Up For The Newsletter