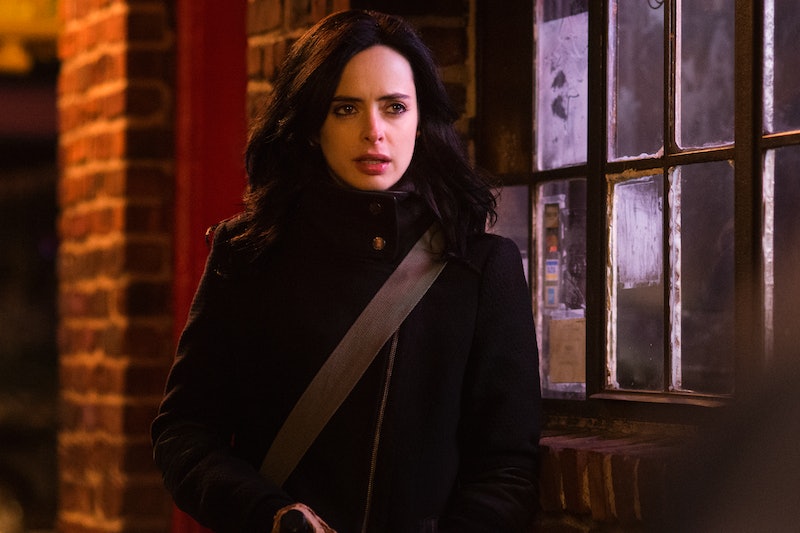 Somebody up there (and by "up there" I mean "out west at Netflix HQ") loves me, because at the 2015 New York Comic Con, Netflix screened the first episode of Marvel's Jessica Jones, and let me just tell you, I am still shaking. It was that good. (Here's where I have to admit that I'm a Krysten Ritter fangirl and went in expecting to love it, but seriously. It's amazing. And now, November 20 is way, way, way too far away and my boss should be expecting me to call in sick the second this thing hits Netflix.)

Those of you hoping that I'm going to sit here and just jot down every Jessica Jones spoiler I could remember are going to be sorely disappointed. Not because I don't think you deserve to see what I saw, but because I think you deserve to enjoy this show as much as I did. For the first time ever, I got an all-over tingly feeling while watching a Marvel show. (It helps that the episode has a seriously steamy sex scene and almost five full minutes of intense sexual tension leading up to it, but I swear the tingling came from other forms of excitement too.)

Jessica is one part Veronica Mars, two parts salty old P.I. from an '80s movie, and 10 parts someone who wouldn't give a sh*t about anything I just said. She's not exactly what I'd call a nice person, but she's a person I'm ready to give up 14 straight hours of my life and all the sunlight that normally comes with it for. At one point, she threatens a pipsqueak with the line "You turn that thing on and I'll pull your underwear through your eye" and my heart soared. This is the female "superhero" we've been waiting for.

As for the show itself, it features a cast of incredible women (from Rachel Taylor to Carrie-Anne Moss) and doesn't shy away from dark, dingy corners. It's funny as it is terrifying, as wonderful as it is dark. "Kelsea, it was just one episode. How do you really know it's that amazing?" you might be wondering. Well, let's put it this way: I've never loved the pilot of a Netflix show and then hated the rest of the season, so I think I'm on pretty solid ground here.

TL;DR: I am head over heels in love with Jessica Jones.