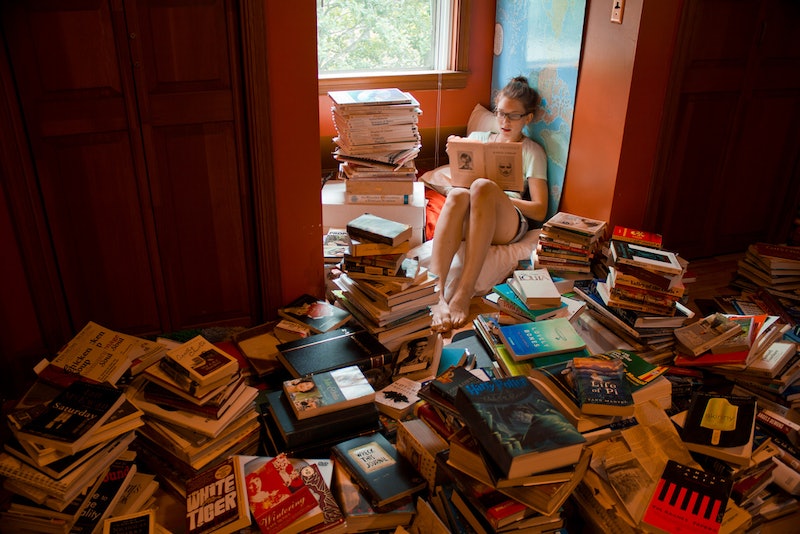 If you aren't a total pantser, you probably have a few ideas about the book you plan to write for this year's NaNoWriMo. Don't get discouraged if you feel underprepared; it's totally possible to write 50,000 words in 30 days without doing any novel planning!

Once you're signed up and have some idea as to which way your project is headed, you can choose one of so many genres for your project and connect with others writing in the same ballpark. Picking a genre makes finding your tribe of writing buddies easier, and gives you a tailor-made support community when the going gets rough.

But hey, maybe I'm way ahead of you with all of this. Maybe you're signed up but have absolutely no idea what to write about. Maybe you have no idea what NaNoWriMo even is, but you're amped-up for the challenge anyway. Whatever the case may be, I've got just the book to inspire your novel-writing project.

No, really. There's something here for everyone. The 17 genres listed below were taken from the NaNoWriMo forums, so you have minimal guesswork to do. Worried about pigeonholing your project? Pick the "Other" category and get to reading.

If You're Writing Adventure...

Read The Court of the Air by Stephen Hunt

Stephen Hunt's The Court of the Air is a grand, steampunk adventure, complete with strange magic, sentient robots, and crustacean people. Hunt perfectly twists elements of our own world into people, places, and ideas that are somehow both familiar and striking.

If You're Writing Erotica...

If You're Writing Fanfiction...

There are more famous examples of fanfiction out there, but they — ahem — belong more to the previous genre than this one. Plus, who doesn't love Harry Potter, right? G. Norman Lippert's James Potter series follows Harry's firstborn son to Hogwarts, where the intrigue never stops.

If You're Writing Fantasy...

Read The Magicians by Lev Grossman

Speaking of Harry Potter, does anyone else get the sense that Lev Grossman's The Magicians is basically an American HP for grownups? The story centers on Quentin: a math-and-fantasy nerd who finds himself admitted into a secret magicians' college in New York.

If You're Writing Historical Fiction...

Read The Nightingale by Kristin Hannah

Set in France during World War II, The Nightingale casts a rare light on women's wartime experiences in Europe. Sisters Vianne and Isabelle take disparate — but equally treacherous — paths as they struggle to survive Hitler's occupation of their country.

If You're Writing Horror & Supernatural...

Read IT by Stephen King

If there was ever a book written about horror itself, it's this one. Reading IT will give you chills and force you to see how horror operates, because — at its heart — that's all the book is about.

If You're Writing Literary Fiction...

Read A Visit from the Goon Squad by Jennifer Egan

Jennifer Egan's examination of aging in the music industry centers on Bennie, a former punk rocker, and his assistant, Sasha, a former runaway. A Visit from the Goon Squad's 13 chapters read like vignettes, each concerning Bennie, Sasha, or a member of their expansive and interconnected circle.

If You're Writing Mainstream & Realistic Fiction...

Big Little Lies is a gut-wrenching tale of family secrets and women's friendships. Jane, Madeline, and Celeste bond after meeting on the way to their children's school, only to find out their lives are more connected than any of them realize.

If You're Writing Mystery, Thriller, & Suspense...

John Darnielle's thriller is narrated by an accident survivor who operates a mail-order roleplaying game called The Trace Italian. Steeped in '80s paranoia and cleverly unwound, Wolf in White Van should be on your TBR, ASAP.

If You're Writing Other Genre...

Hoo boy. Metafiction with near-endless footnotes and at-times unreadable text? Mark Z. Danielewski's House of Leaves made waves back in 2000, and remains notable for its unforgettable style.

Read The Dog That Talked to God by Jim Kraus

When a widow buys a Miniature Schnauzer for company, she hardly expects the dog to talk. But talk Rufus does, and not just to his owner, but to God himself. If this sounds like the funny, feel-good read you've been wanting to write, check out Jim Kraus' The Dog That Talked to God.

If You're Writing Romance...

When genetics professor Don decides he needs to get married, he designs a research project to find the perfect wife and weed out the undesirables. Even though Rosie meets all of his chuck-out criteria, socially inept Don agrees to collaborate with her on a quest to track down her biological father. You can see where this is going, right? The Rosie Project is a witty and charming read, so be sure to include it in your NaNoWriMo prep.

If You're Writing Satire, Humor, & Parody...

Read John Dies at the End by David Wong

This book has everything: quantum physics breaks, a drug called Soy Sauce, cult-like disappearances, and ghosts. It's utterly hilarious, screwball comedy with rules that will make you want to write something exactly like it. (But don't do that.)

If You're Writing Science Fiction...

Neal Stephenson's Anathem takes place in a world where intellectual monks recuse themselves from public interaction and live in almost complete seclusion. When a member of one of these brotherhoods discovers a dangerous cover-up in the outside world, he is banished, and his student takes up the mantle in an investigation that is sacrilegious to their order.

If You're Writing Women's Fiction...

Former wildland firefighter Elizabeth is living as an arson investigator when a wildfire that threatens her home calls her back into action. Her former friend, Mindy, uses the fire as a chance to escape her unfulfilling life by helping a man who has been rendered homeless in the blaze. In Smoke, the wildfire forces both women to sort out their failing marriages before it's too late.

Read The Art of Being Normal by Lisa Williamson

David's got it rough. He's 14-years-old, rumored to be gay, and secretly transgender. When a tough new kid named Leo stands up to David's bullies, the two teens forge an unlikely friendship, but one whose secrets are just on the brink of exposure.

More like this
11 Mid-Length Haircut Ideas To Inspire Your Next Salon Visit
By Carolyn Steber
The Best Deals On Amazon Today
By BDG Commerce
These Are The Best Skims Alternatives, According To Enthusiastic Amazon Reviews
By Andrea Gale Boerem
Dog Owners Are Calling These Hidden Gems On Amazon Their Most Amazing Finds Of The Year
By Caroline Reinstadtler
Get Even More From Bustle — Sign Up For The Newsletter
From hair trends to relationship advice, our daily newsletter has everything you need to sound like a person who’s on TikTok, even if you aren’t.