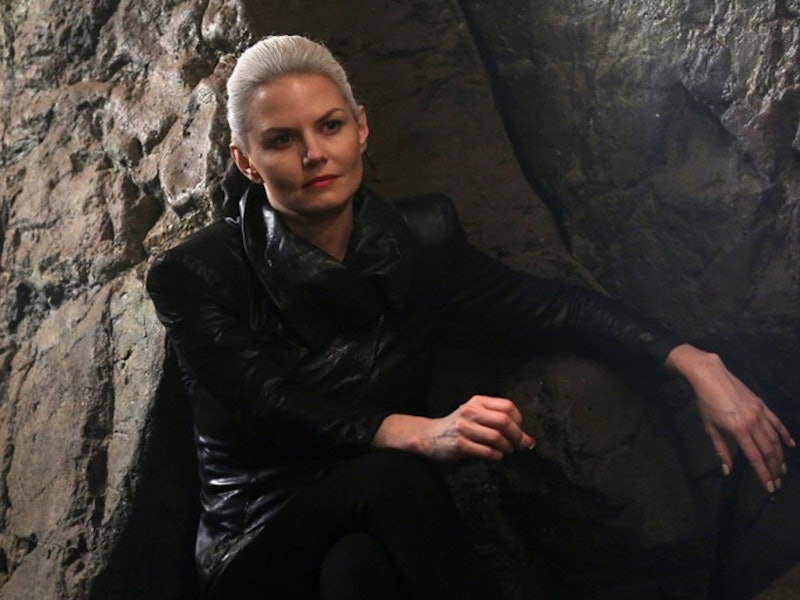 It's not like we haven't already got enough to worry about on Once Upon A Time this season, what with Emma being the new Dark One and also intent on snuffing out the darkness by reuniting Excalibur and the dagger once and for all — something no other Dark One has ever been able to accomplish (obviously). However, while things are bound to get a whole lot worse in Storybrooke in the first half of the season, it's Season 5B after the winter hiatus that is going to end up being "hell" — at least according to executive producers Adam Horowitz and Eddy Kitsis. A lot of fans have been taking that literally, leading to speculation that we may actually meet the Devil himself on Once later this year. So will it happen? Eh, possibly — but not quite how you think.

According to TVLine, there is some casting going on for a new character without a real name — he's simply known says "Distinguished Gentleman" or "DG". Given that we've already been introduced to the furies of Greek mythology and probably met Charon in the boat sent to collect on "the price" for saving Robin's life, we could end up sticking to the theme and end up traveling to the Underworld, where we could come face to face with Hades. After all, Hercules is a Disney movie — one that hasn't yet been covered on Once, it's worth mentioning — so it's certainly a possibility.

If you want to delve a little deeper, Charon is the ferryman of Hades who takes all the departed souls across the River Styx to the world of the dead. Again, it's likely that Charon was the cloaked figure we saw a few episodes back, and putting that sighting together with the idea of "hell" and the knowledge that someone (or more than one person) is going to die this season, it seems like a trip to the Underworld and a run-in with Hades is more and more likely. I have to say, I'm really excited at the thought.

I doubt the death of any major character will be permanent this season. In fact, I'd say it's more than likely that whoever dies and travels to the Underworld will have to face some kind of trial or perhaps confront and overcome their demons/past deeds in order to overcome that death and return to the world of the living. My money is on Regina, but only time will tell if I'm right. In the meantime, it sure is a lot of fun to think about.

More like this
The ‘Love, Victor’ Showrunner Gave Fans Hope For A Possible Spinoff
By Brad Witter
Legacies Showrunner Said There Is Still Hope For More Vampire Diaries
By Gretchen Smail
Everything You Need To Remember Before Westworld Season 4
By Brad Witter
'Hacks' Is Officially Coming Back For Season 3
By Gretchen Smail
Get Even More From Bustle — Sign Up For The Newsletter