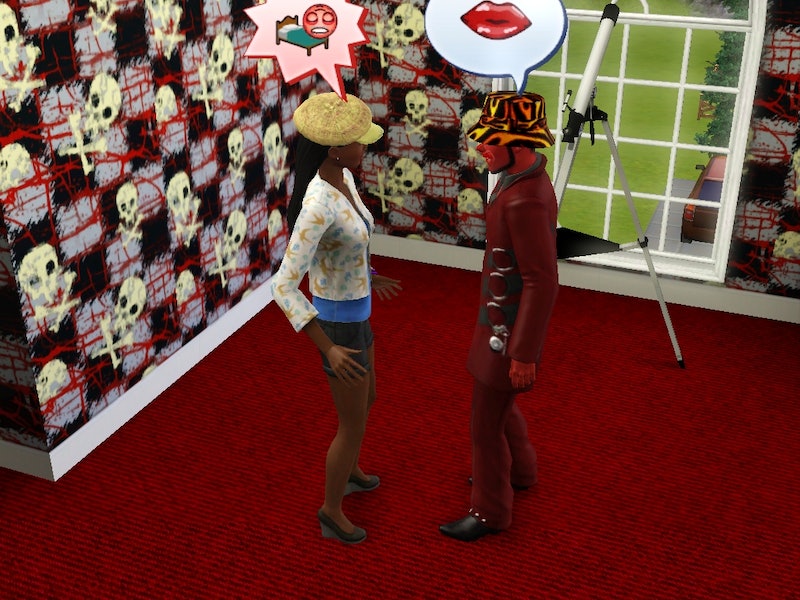 If you enjoyed last week's spooky episode, then you are in for a trick-or-treat! The Sim Chanel-O-Ween mischief has only just begun. This week, the president of Sim Kappa Kappa Tau organized a spooky maze for her sorority sisters. She told the Sim party planner (aka me) to make it look like the labyrinthian hedge maze from The Shining, but that was not going to happen. For starters, I couldn’t figure out how to cover the ground with a blanket of snow. So, I used the next best thing: sand. Also, the maze is hilariously easy to navigate, thanks to the combination of the short hedge walls and the relatively uncomplicated layout.

Something Lurked Outside One Of The Sim Kappa Kappa Haus Bedrooms

Who/what could possibly be creeping around the Sim Kappa Kappa Tau halls?

It Was The Sim Red Devil With His Microwavable Supper

Sim Chanel made a hilarious face.

Sim Hester/Chanel #6 made a hilarious face.

Sim Zayday Ended Up In The Sim Red Devil's Lair

Sim Zayday wasn't having it for a second.

She walked away from the Sim Red Devil, wandered down a flight of stairs, and was home sweet sweet home. Well, that was easy.

It's probably the most impressive maze in the history of mazes.

Oh, Wait! I Almost Forgot About The Special Effects Machines

Because what's a labyrinth without lasers and fog?

The Walkway Leading Up To The Maze Is Pumpkin Else

That pun was pretty a-maze-ing, eh?

I spent 15 annoying minutes trying to get all of the Sim Kappas in the same spot at the same time. They just didn't want to stay put. But because I am dedicated to my craft, I did not give up. And once they were all present and accounted for, the Sim Chanel-O-Ween maze could begin.

Wait, Who Is That?

When I hovered the cursor over this Sim, I found out exactly who he was: a paparazzo. UH OH.

*Gasp* The Sim Red Devil Was Close By

Do you see him? It's like Where's Waldo but with less stripes and more bucket hats.

She didn't care to about finding the maze's exit. She was more interested in standing in one spot and thinking about her bed.

Sim Hester/Chanel #6 Was Engulfed In Flames

Like Sim Chanel, Sim Hester/Chanel #6 was consumed by thoughts of her own bed.

Like Sim Chanel, Sim Chanel #5 hated the maze. So much so that she considered calling the police.

She promptly left the maze.

The Sim Red Devil had planned on sneaking into the maze and scaring the Sim Kappas, but was stopped in his tracks by the paparazzo.

Another Paparazzo Skulked Around The Sim Kappa Kappa Tau House

I wonder if Narcissa will ever grace us with her presence/break into the house? It'd be just like old times!

After His Conversation With The Paparazzo, The Sim Red Devil Rushed To The Maze

"I hope I didn't miss all of the fun," the Sim Red Devil muttered as he walked the pumpkin path.

Oh, He Totally Missed All Of The Fun

All of the Sim Kappas were long gone. Even Sim Chanel and Sim Chanel #5. Curses!

Meanwhile, This Was Going On Underneath The Sim Kappa Kappa Tau House

If you have any ideas as to what's going on here, please let me know. Because I've got nothing.

Meanwhile, A Familiar Face Took A Bath In Her Nightgown

HOLD THE PHONE. Could it be? Sim Chanel #2? Is she really back? Why's she bathing in her PJs? What will the other Sim Kappas do when they find out Sim Chanel #2 has returned? TO BE CONTINUED.