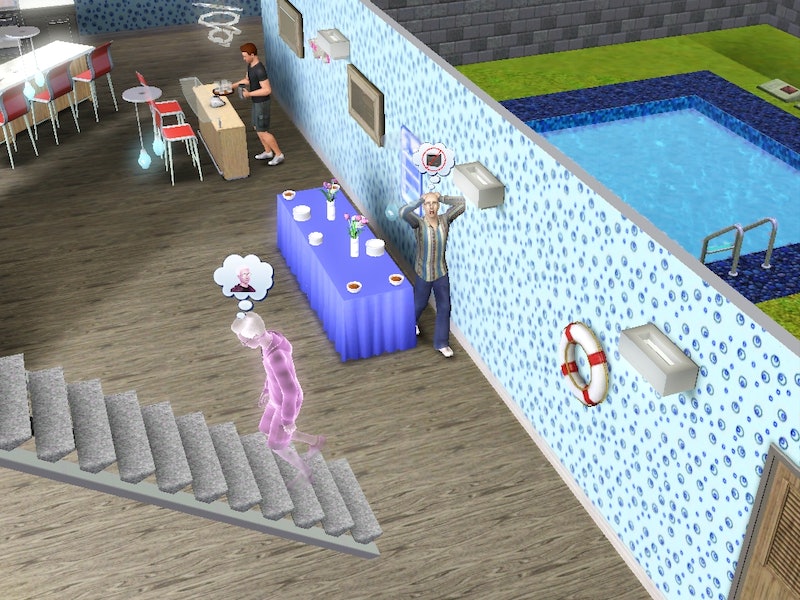 Does the name "Gobias" ring a bell? If you've been following the The Sims BB17 saga, it should. If it doesn't, allow me to jog your memory: A few weeks ago, seven of The Sims Big Brother 17 contestants hopped aboard Sim Grim Reaper Airlines. As the other houseguests mourned their dearly departed roommates, Sim Becky's cell phone rang. The caller was a Sim named Gobias. He wanted to know if Sim Becky would be down to go to a party. Given that seven of her roommates had just dropped dead, Sim Becky understandably declined this offer. I wrote off Sim Gobias as "some rando," and that was that.

Are you ready for the biggest twist in The Sims Big Brother 17 history? I'm not being hyperbolic when I say it is a doozy. Are you sure you're ready? OK, then. Here it is: Sim Gobias is not "some rando." Sim Gobias is part of the show.

Sim Gobias is a The Sims BB17 contestant.

At the end of the penultimate episode, I did not evict someone. Instead, I added someone to the house. (Seemed like a good way to keep those Sims on their toes, remind them who calls the shots, et cetera.) And that someone was a Sim who has been waiting for this moment for months: Sim Gobias.

What else happened this week? Don't worry, I'll spare no detail.

The Moment When Sim Jackie Showed The Shower No Mercy:

She wound up using an entire bottle of bleach on the shower walls, and the toxic fumes were well worth it. That thing was lookin' vile.

The Moment When Sim Clay Scoured This Moss-Covered Toilet:

Who needs a greenhouse when you have a porcelain throne full of sea plants? Wow, so chic!

The Moment When It Became Very Clear That The Evicted Sims Do Not Give A Hoot:

I ought to replace the wood floor with kitty litter.

The Moment When I Was Like, "What The Heck Are Sim Audrey & Sim Austin Doing?"

Those are some seriously weird TV watching poses, y'all.

The Moment When I Realized What Sim Audrey & Sim Austin Were Doing:

I see. They're just doing some squats and some jumping jacks while a show about a lady falling on a treadmill plays on the screen. I should've known.

The Moment When THE PAPARAZZO GOT IN THE HOUSE:

WHERE DID SHE COME FROM? HOW DID THIS HAPPEN? HOW DID I MISS THIS? RUN AWAY, SIM JACKIE! SHE IS NOT ON YOUR SIDE!

The Moment The Paparazzo Said The House Is Trash:

Not two seconds later, the paparazzo vanished. Great. Why did Sim Jackie have to tell the paparazzo about the dishwasher, too? The paparazzo is totally going to write an article about what a negligent Sim Big Brother I am. My reputation will be tarnished, not unlike the houseguests' grill. (Whoops, never got around to replacing that thing.)

The Moment When I Was Like, "What The Heck Is That Empty Chair Doing?"

The picture doesn't quite do it justice, but the chair was no joke floating in the air.

The Moment When I Was Like, "Nope, Still Don't Understand What's Happening Here":

The chair hovered above the table for a good 15 seconds.

The Moment When Ghost Sim John Appeared Out Of Thin Air:

GHOST SIM JOHN WAS INSIDE THE CHAIR. The chair was possessed. Cool cool cool.

The Moment When The Ghost Sims Left A Trail Of Waffles In Their Wake:

Now THAT'S the kind of Ghost Sim behavior I can get behind.

The Moment When Ghost Sim Meg Was Feeling Adventurous:

"I'm simply taking a ghoulish stroll around the perimeter of the house," Sim Meg said. "Stretching out the walkin' sticks, as they say. If I happen to scare a random passerby, that's just an added bonus."

The Moment When I Told Sim Liz That I Was Going To Take The Cake:

The Moment When I Threw The Cake In The Garbage:

ARE YOU HAPPY NOW, SIM LIZ?

The Moment When I Prepared For Sim Gobias's Arrival:

Oh, I almost forgot a somewhat important detail! Sim Gobias is a vampire. That's his vampire bed. It's quite the statement piece, no?

The Moment When Sim Clay Took A Look At The New Vampire Bed:

At first, Sim Clay thought it was a treadmill. Try again, Sim Clay!

The Moment When Sim Clay Admitted He Was Mystified:

You'll find out, my dear. All in due time.

The Moment When I Told Sim Gobias To Stop Scaring That Baby:

Normally, I wouldn't interrupt Sim Gobias when he's in the middle of such important work, but it was time to go to the BB17 house. We had a show to do.

The Moment When Sim Gobias Told Me He Needed To Make A Pit Stop First:

Why yes, that is a Capri Sun pouch full of blood.

The Moment When Sim Gobias Moved Into The BB17 House:

Sim Gobias and Ghost Sim Steve hit it off immediately. Their *~supernatural connection~* was palpable.

The Moment When Being In The Same Room As A Broken Dishwasher Proved To Be Too Much For Sim Gobias:

Hey, houseguests? If the busted dishwasher bugs you thatmuch, maybe do something about? You could, I don't know, fix the dang thing?

Ah, you're right. That'd be crazy. Carry on with the carrying on.

To her credit, her tone was extremely polite.

The Moment When Everyone But Sim Gobias Called It A Night:

The Moment When Sim Gobias Took A Nap On A Chaise Lounge:

This infuriated me. Doesn't he know about the beautiful stone bed with his name on it?

The Moment When Sim Gobias Finally Found His Bed:

I knew you could do it, Sim Gobias. I've always believed in you.

The Moment When Sim Jackie Snuck Into Sim Gobias's Room:

Don't wake him up, Sim Jackie! He just fell asleep!

Careful, Sim Jackie. I wouldn't upset Sim Gobias if I were you. Also? You should be so lucky to call such a stunning sculpture your bed!

Next week: IT'S THE THE SIMS BB17 FINALE! Sim Gobias will attempt to turn one of his roommates into a vampire, Sim Liz will be forced to participate in an eviction challenge, and all of the houseguests will throw a party. And yes, a winner will be named. And yes, there will be cake.