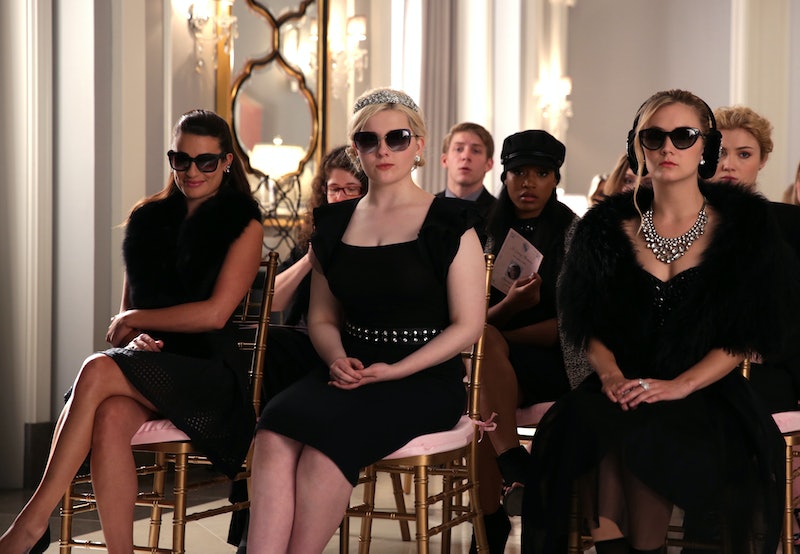 Mysteries keep viewers tuning in to a TV series week after week, in hopes that a clue will emerge to snap all of the puzzle pieces together once and for all. But while some shows inch us towards our most likely suspects, there's one series that continues to baffle me, no matter how many episodes I watch. I'm talking about Fox's horror-comedy Scream Queens, the show that keeps you guessing with each and every decapitation, betrayal, and sorority salute. My original Scream Queens Red Devil theory that Gigi is the masked murderer has already been shredded, since it was revealed that she is just another one of the villain's many accomplices. That just goes to show that it's almost impossible to predict what's going to happen next on Scream Queens. Of course, that doesn't mean we should stop trying. If anything, it's time to start working on your Scream Queen theories even harder, if there's any chance of unraveling this mystery before the answers are finally revealed.

Of course, there are plenty of great things about not knowing what's coming next, main that you're always in for a surprise. There's no Red Devil suspect that wouldn't make my jaw drop, so in that way, the show has already succeeded. Since we don't have any answers yet, here are a few Scream Queens theories that will hopefully hold you over until the next episode airs on Nov. 3.

Reddit user Mr. Pleiades thinks that there's twice the sexy around campus: Chad and his identical twin, and both are in on the Red Devil murders. The evidence is in Chad's sex life: sometimes he's sexually interested in dead things; other times he's all about women who are older than him. Then there's the fact that Chad has been known as being both really, really great in bed, or really, really lousy. If Chad had a twin, it would be the perfect alibi for the crimes, as he could both play the Red Devil and confront his twin in the costume.

2. Grace's Dad Is The Red Devil To Keep Her Out Of School

So what's the motive for the Red Devil killings? According to Reddit user Catlantica, it's simple: Grace's dad wants her to drop out of school. The death of Grace's mother left him alone, and sending his daughter off to college was just too much for him to deal with, so he decided to "play a game" that would encourage her to come home. He loves slasher flicks, and playing the part of the Red Devil was the only way he felt was extreme enough to get Grace back. Everyone else could have been people that he hired to protect his facade.

Just who the dead sorority girl's baby grew up to be has been a hot point of contention with Scream Queens fans, but few people have considered just who the baby's father is. Reddit user PeopleEatingPeople has a theory: what if the baby's father is Dean Munsch's husband, the same one who had an affair with a 19-year-old years earlier? That might explain why Munsch hates Kappa so much, and why she decided to cover everything up instead of using the incident to destroy Kappa: she wanted to protect her husband's secret. It may also provide evidence of Dean Munsch being the Red Devil.

Reddit user MarysSmith pointed thinks that Hester and Gigi could secretly be mother and daughter. If that's the case, could Hester be in (at least one of) the Red Devil costumes, and Gigi be the one calling the shots? It certainly would be one way to explain Hester's bizarre fascination with death: she's the daughter of a crazed serial killer!

These theories may just be speculation, but so far they're the only thing we have. Fingers crossed that whatever the final outcome of Scream Queens is, it's as juicy as each episode.