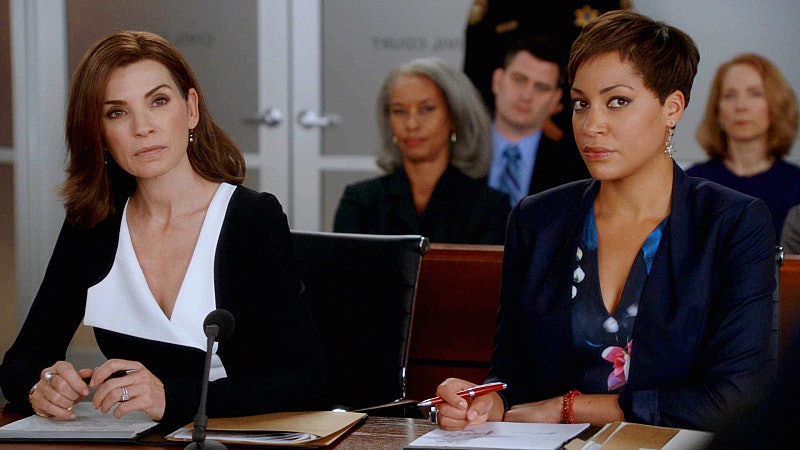 This season of The Good Wife started with Alicia Florrick enjoying her independence. After losing her election and being forced to leave her law firm with Cary and Diane (RIP Florrick, Agos and Lockhart), Alicia embarked on a career as an independent lawyer — in Bond Court. In "Taxed," when Cary came to Alicia with an offer that could get her her a spot at Florrick, Agos and Lee, she refused. She likes her independence, she told him. However, at the end of the episode, Alicia asked Lucca Quinn, her new lawyer friend she met in Bond Court, if she'd like to "do it together." Is Alicia going to create a new firm with Lucca? Or was she just suggesting they work as a team from here on out?

From the second Alicia met Lucca, it was a meeting of the minds. Lucca is a stylish lawyer who is focused on her work, but not so self-important that she isn't willing to lend a Bond Court newbie a helping hand. Lucca was the first Bond Court lawyer to reach out to Alicia and help her find her way, so it doesn't seem like Alicia would have to worry about her new friend stabbing her in the back, something she constantly had to look out for with Cary and Diane. And, Lucca has already proven herself to be a worthy collaborator, co-chairing cases with Alicia, and sharing a drink after work.

Should Lucca and Alicia actually get into business together, there are a few things that the two should probably go over. Little is known about Lucca's endgame or what circumstances brought her to Bond Court. She is on the grind, just trying to get paid in Bond Court and looking for those money cases, but does she have a dream job? One thing is clear: Lucca is ambitious, so who knows whether or not a little law firm with Alicia will be on her to-do list. Moreover, it seems odd that Alicia would be so eager to work with a new partner after declaring how much she enjoys her independence.

That being said, as things heat up between Eli and Peter, Alicia will be needed to play the part of the Governor's wife, so she could use another person in her corner. If it just so happens to be Lucca, another kickass woman, then all the better!