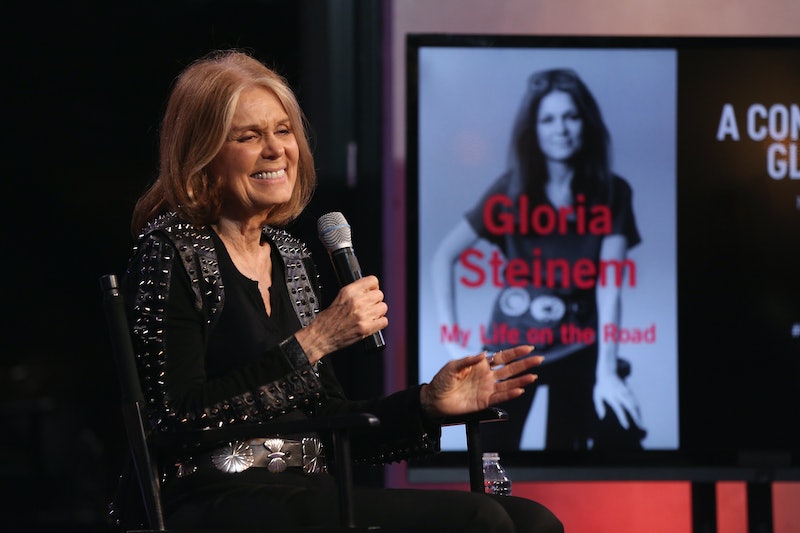 In case you haven't heard, social media can do good as well as evil. Feminist activists, comedians, personalities, and organizations have taken up the Twitter platform with aplomb — never have 140 characters seemed so pithy or capable of so much work for gender equality. If you've got a Twitter account and want it to feature more than just your friend's wining about the traffic on the Interstate, follow these 15 feminist Twitter accounts to put yourself at the forefront of the fight for gender equality and its manifestations all over the world. Pretty powerful for one little click.

Interestingly, a February 2015 study showed that tweeting about the frustrations of daily sexist struggles actually had serious, tangible effects on women's wellbeing. Just getting it out into the world released emotion and created the sensation of being heard rather than suffering in silence. So you shouldn't just follow and hang in the background: join the conversation. Retweet, comment, and tweet openly about your own encounters with sexism, discrimination and misogyny, and how they make you feel. Because as much as these 15 accounts talk lucidly about women's rights today, your voice is important too — and the discussion between women is one of the real feminist boons of today's social media.

Want to chat to a human rights activist in Bahrain who's seeing crackdowns on women's rights campaigners? Get angry about representations of girl in film with the woman who played Matilda? You got it.

I don't know if there's such thing as a queen of feminist Twitter, but if there is, it's probably Jessica Valenti. The founder of Feministing and vocal feminist across basically every platform there is — with four books, articles in every top newspaper, talks everywhere — she may as well have All Hail Valenti written across her forehead. And, unsurprisingly, her Twitter game is rad as hell: furious, eloquent, and extremely funny.

This project, which is now a book, was the brainchild of Laura Bates, but has now become a global phenomenon. It seems pretty simple — you tweet to commemorate the stupid sexist stuff that's been done to you that day, from cat-calling to workplace discrimination — but, en masse, it makes for depressing and enraging reading. This stuff needs to be witnessed, in all its horrible, teeth-gnashing glory.

One of the most powerful women in the world you may never have heard of, Phumzile Mlambo is the Under-Secretary-General of the United Nations, and, crucially, Executive Director of UN Women, which fights for women's right of access to education and healthcare, legal equality, and general wellbeing worldwide. Her Twitter is a parade of official engagements around the world showing the true breadth of feminist fights; it'll lead you down a rabbit-hole of discovery.

Feminismos En Red is run by the people who also publish Biblioteca Feminista, a free online library of seminal texts on feminism and gender in multiple languages. It reports on feminist and LGBT issues across Latin America and Spanish-speaking countries more widely, and is part of a large network of Spanish-language Twitter feminism.

Janet Mock is basically the coolest woman alive right now. The feminist and transgender activist uses her Twitter to do a wide range of things: plug her web series, advocate for rights campaigns around the country and across the world, and also just be kind of a feminist badass about the rights of women, particularly women of color and transgender women. It'll make you want to punch the air.

This may raise a few eyebrows when people see it on your dash, but fear not: it's the most hilariously tongue-in-cheek feminist Twitter you'll see. I know that's a big claim, but when the entire thing is based on skewering the stupid reasons that people claim they "don't need feminism," complete with surreal humor and the kind of awful truth that makes your stomach hurt.

Feminist Frequency is the name of the award-winning web series on women's representations in popular culture hosted by Anita Sarkeesian — whose name you should know as the critic at the center of the whole disgusting Gamergate melee in 2014. Sarkeesian points out the sh*tty anti-woman messages across mass media, particularly in video games and nerd culture. Unsurprisingly, that has made her a target — and her Twitter is an outstanding piece of outspoken feminism in the face of near-constant abuse. Do not read the comments unless you want to get seriously upset.

This seriously powerful social media campaign is all about violence against women — and the fact that, yes, it can happen to any of us, and does. The YesAllWomen hashtag went viral when the campaign was launched, and stories continue to pour in of domestic abuse and serious assault, every day. The Yes All Women Twitter features these stories alongside campaigns for law changes and better protection.

The Vagenda is the magazine that every feminist always wanted but didn't know she could have. It's funny, ferocious and very, very angry. The Twitter that nominally promotes it is all of those things too, but it's also an amazing compilation of sexist nonsense from around the globe, complete with hilarious commentary that will make you giggle senselessly while you also rage against the patriarchy.

Gloria Steinem is now 81. How can that be possible?! The woman who was the figurehead and lynchpin for the second wave of feminism is still going strong — a book of memoirs is out, and she spends most of her time on the road, meeting feminists and human rights activists, refining campaigns, and generally being an inexhaustible badass. Follow her adventures and be inspired.

Take The Lead Women is a very specific part of the feminist campaign: making women a bigger part of corporate culture worldwide. We all know the dismal stats about women in boardrooms, as CEOS and leading companies (if you don't, they can be summed up in the word "bad"), and Take The Lead is actively working to change that. If you're an ambitious woman finding your way, this is a Twitter you need to know.

If you're interested in the academic side of feminism, whether it's as an academic yourself or as somebody with an interest in psychology, this Twitter about feminist women in psychology is going to give you conniptions. It's not all about history, either: it rages about academic wage gaps and inequality today, joins in theoretical debates about intersectional feminism, and generally wields its intelligence for serious good.

Tellingly, Amina's profile lists her as both a feminist and a "womanist," the term coined by Alice Walker to acknowledge the fact that black women have specific feminist concerns as well. And Amina herself, an academic at Goucher, is focused on the intersectional aspects of feminism and how it needs to be constantly aware of racial diversity. She's also a social activist, tweeting about everything from ethnic minority representation in culture to protesting rights. Follow her and have your mind opened.

The NCADV is one of the most important organizations in America, and its Twitter is both eye-opening and devastating. Did you know, for instance, that domestic violence costs the American economy around $8 billion a year? You do now. This is the sort of Twitter that makes for hard but inspirational reading — which is why it's all the more important that it finds its way onto your Tweet Deck, and your everyday consciousness.

The magazine Steinem and other second-wave feminists founded, Ms., is still going strong —and its foundation is doing good everywhere it looks. Currently it's absolutely dominating the Twitter game with an inspiration hashtag, MyFeminismIs, which is designed to incorporate as many versions of feminism as possible — from women of color, transgender women, the disabled, veterans, everybody. It's one of the best acts of social media as inclusion around. Get involved.