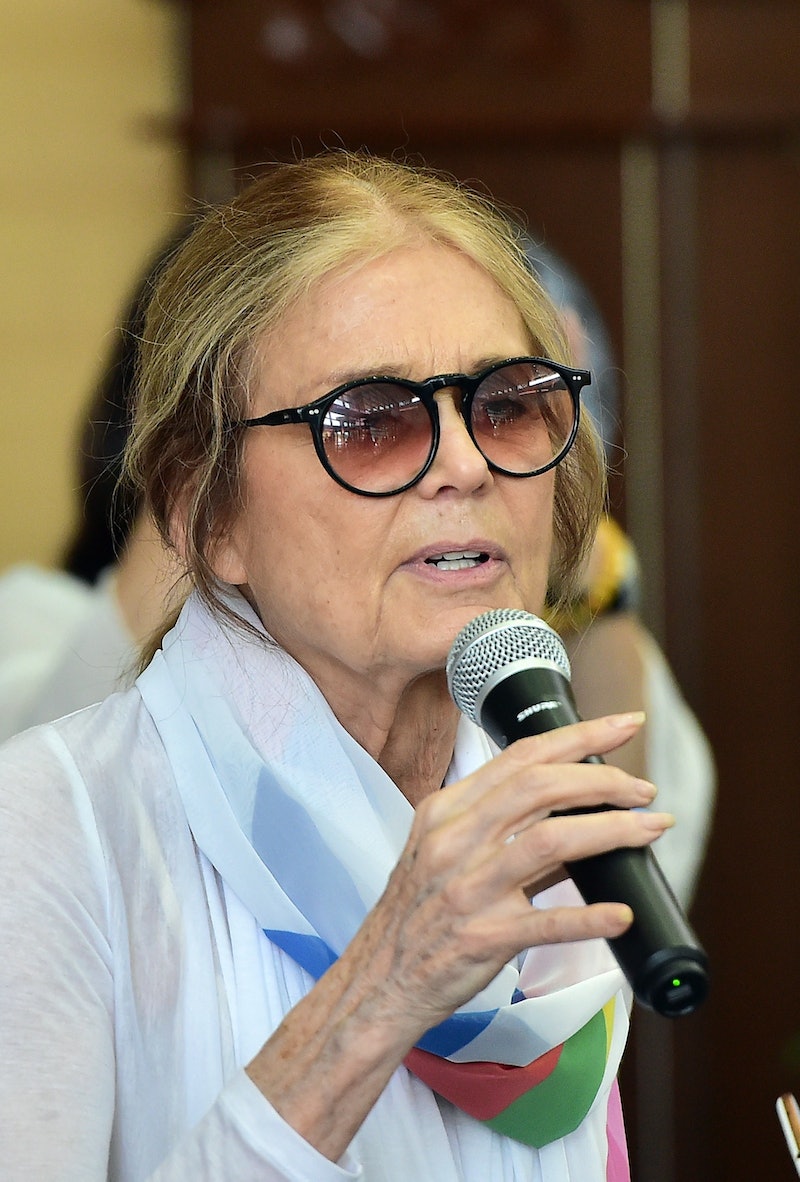 Gloria Steinem, one of the most prominent leaders of the second-wave feminist movement, has been back in the spotlight lately in light of her upcoming memoir My Life on the Road. In one particular interview with The Guardian's Emma Brockes, she reflected on how the feminist movement has changed since she was at the forefront of it (though she arguably still is). While we've all been working toward the same goal of gender equality, Steinem pointed out that second- and third-wave feminists have dealt with different issues — and a lot of the same ones, as well.

It's hard to say who today's most iconic feminists are, with so many scattered throughout the blogosphere, academia, and the entertainment industry. But Steinem is certainly one of the most — if not the most — famous feminist activists from the second wave during the '60s, '70s, and '80s, and she's still active as a speaker, organizer, and writer. To remain relevant today, it's clear that Steinem has had to continuously educate herself and rethink a lot of the philosophies she espoused when she first joined the movement.

Here are some ways that feminism has changed — and stayed the same — since Steinem's time.

1. Women's Treatment In The Workplace Has Come To The Forefront

With more and more women taking leadership roles in the workplace, particularly in male-dominated industries like tech, we've been paying more attention to workplace harassment, language policing, and other forms of discrimination women have faced at work. Steinem has expressed her support for Sheryl Sandberg, who has become the face of this issue, and had an interesting read on the criticism that Sandberg caters disproportionately to white, upper-class feminists: "Only in women is success viewed as a barrier to giving advice."

Steinem herself says that her attitude toward the trans community has evolved over the years. In a 1977 essay published in the book Outrageous Acts and Everyday Rebellions , she wrote that transgender people were unnecessarily "mutilating" themselves rather than accepting that someone can have a female body and a stereotypically male personality (or vice versa). While her critique of the idea that people need surgery to make their genitals and personalities "match" was a valid argument that many trans people themselves have made as well, she placed undue blame on people who needed surgery for their own well being. However, in a 2013 Advocate article, she clarified her position: "I believe that transgender people, including those who have transitioned, are living out real, authentic lives... Their health care decisions should be theirs and theirs alone to make."

3. Women Are Taking A Stand Against Slut-Shaming

This is an issue not all older feminists have addressed sympathetically. Feminist author and activist Susan Brownmiller's recent slut-shaming and victim-blaming comments — such as "the slut marches bothered me, too, when they said you can wear whatever you want. Well sure, but you look like a hooker" — demonstrate a generational divide in beliefs about victims' responsibility (or, most young feminists would say, lack thereof) for preventing sexual harassment and assault. Steinem told The Guardian that she also witnessed this sort of victim blaming language when she worked for Brownmiller at Ms., covering a story about domestic violence as if the wife were at fault. In another essay in Outrageous Acts and Everyday Rebellions , Steinem said she initially had trouble understanding why she noticed feminists dressing in a more revealing manner, but she grew to understand that they were not conforming to pressure to appeal to the male gaze; rather, they were celebrating their right to dress however they wanted.

Here are some ways feminism, on the other hand, has stayed pretty much the same over the years.

Steinem, who got an abortion while it was still illegal, believes that reproductive rights will be the last frontier in feminism, and she had something pretty fascinating to say about them: "Patriarchy — or whatever you want to call it, the systems that say there’s masculine and feminine and other bullshit — is about controlling reproduction. Every economics course ought to start not with production but with reproduction. It is way more important.” While it is legal to get abortions under most circumstances in the United States, our reproductive rights are in a precarious position, which Steinem chalks up to racism as well as sexism, with a number of religious movements "devoted to encouraging, forcing white women to have a lot of children."

The pay gap in 1963, at the beginning of the second-wave feminist movement, was 59 cents to the dollar. In 2014, it was percent of what white men make. We're making progress — nice job, feminism — but still have a long way to go, especially for women of color.

Steinem and other feminists she worked with, like Bella Abzug, took issue with the white, upper-class feminism espoused by Betty Friedan, which focused on women's right to work outside the household (something many non-white and working-class women were already doing out of necessity). Today, feminism is still dominated by white women, often at the expense of women of color. For example, white feminist musicians like Taylor Swift, Miley Cyrus, and Lily Allen have been called out for silencing women of color and objectifying them as props in their performances. And issues that affect LGBT women and gender-nonconforming people are often put on the back burner in favor of more "mainstream" ones. As Steinem said in reference to Friedan's brand of feminism, "We wanted to transform the system, not imitate it" — a goal many privileged feminists still need to keep in mind.

4. Feminists Still Want Nothing More — And Nothing Less — Than Equality

People sometimes have an easier time viewing earlier waves of feminism as necessary for gender equality, not women's supremacy, than the most recent wave. Of course it was necessary for women to obtain the right to vote or to own credit cards, some say, but now feminism is outdated. But issues concerning modern feminists matter just as much. Equality is about not just the right to vote but also the right to walk down the street feeling safe and to go to work without being harassed. Gloria Steinem's continued contributions to feminism have proven that by keeping all these issue in mind, we can bridge generations.

More like this
Sandra Bullock, Girlboss Extraordinaire
By Matt Harkins & Viviana Olen
25 Quotes About Love To Share During Pride Month 2022
By Madeleine Aggeler and Emma Garza
Meet The Spice Company Founder Who Sees Chai As A Metaphor
By Madhuri Sathish-Van Atta
The 'Hocus Pocus' Sequel Finally Has A Release Date & It Makes Total Sense
By Shannon Barbour and Radhika Menon
Get Even More From Bustle — Sign Up For The Newsletter