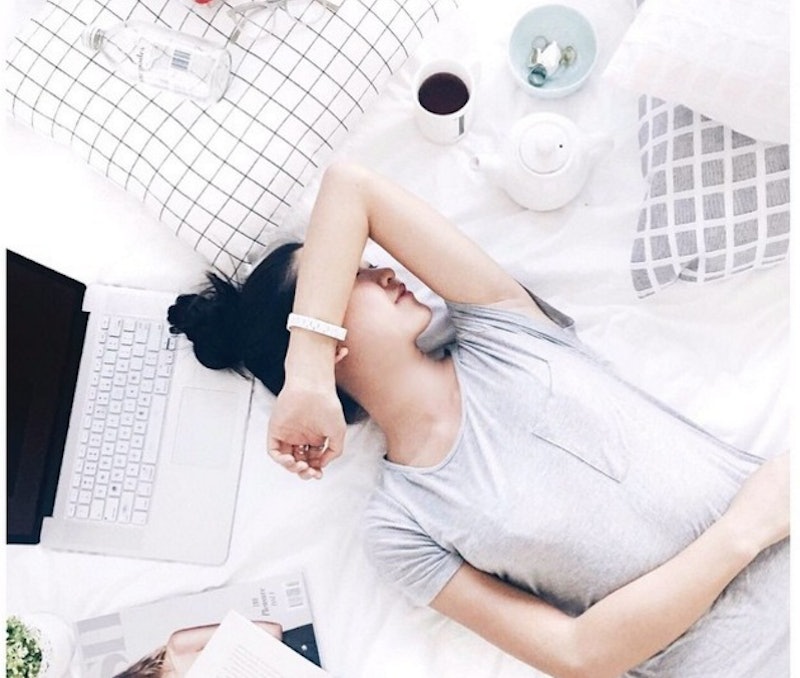 No one ever likes failing, but sometimes it’s OK to quit. We’re brought up in a culture that’s full of “go-getters” and “atta girls,” so sometimes it can be hard throwing in the towel, mostly because we think it will cost us. We’ve been taught that just because you fall doesn’t mean you don't get up, and just because you fail the first time doesn’t mean you need to stop trying. This is all valid and good, but when exactly do you draw the line? When is enough actually enough? And do you have to feel guilty hoisting up that white flag?

The answer is no. While it can bruise the ego a bit, there are times it’s perfectly OK to give up and move on. Remember, not all quitting is negative. Sometimes admitting a particular venture isn’t working will lead you to something better or, at the very least, free up your energy to start looking for that something better. There shouldn’t be any guilt, disappoint, or regret involved in that decision — and the first step to begin seeing failure as an opportunity is to learn when it’s OK to cut your losses and run.

Below are seven times it’s OK to quit, because sometimes failure is just the next necessary step towards your big, awesome goals.

Things change, and that's not something to feel guilty over. Maybe your priorities shifted, maybe your schedule became wonderfully full — whatever the change is, if it caused you to no longer feel passionate over a project, it's OK to cut your ties with it.

According to Christy O’Shoney at self-development blog Nectar Collective, "Let’s set a clear distinction here between boredom and total, soul-crushing apathy. Boredom is a state that can be remedied by a simple shift in perspective — maybe a walk around the office, a brainstorming session, or even just a cup of coffee. Apathy, on the other hand, is far more deadly. It’s that inconsolable, painful state of disinterest. When your work feels totally void of meaning, it may mean that it’s time to find something new." If you stick to something just because you don't want to be a quitter, you're not actually winning. You're just filling your schedule with busy work. If the work you're doing no longer feeds your soul, it's OK to step away from it, guilt-free.

2. You Have To Make A Choice

Sometimes you're not quite ready to cut ties with something, but life happens to corner you into making a choice. Say your career is taking off, and there isn't enough room in your schedule to continue with your Italian lessons, or you decided to pick up an internship to help get into grad school, which means you can't continue to waitress well into the night because now there isn't enough time to study. You'd love to keep both options, but it's just not possible to do so. This means you now have to make a choice. And whatever you end up quitting, it's OK that you closed the door on it. Because it means you're moving towards newer, possibly greater things.

Small business writer Cheryl Conner at Forbes says, "We all know at least a few individuals who 'didn’t know when to quit' and suffered permanent injury or perpetual unhappiness and frustration because the goal they’re obsessed with has become unattainable or unwise." Remember, quitting isn't always giving up. It's also choosing to focus on something more important.

3. You're Setting Up Boundaries

As much as we'd love to do it all, we can't. Beyonce only has 24 hours in a day, and so do we. Because of it, sometimes it's necessary to quit in order to set up realistic boundaries in our schedules. Saying goodbye to aspects in our life that don't move us forward to a bigger goal is sometimes necessary, and it shouldn't make you feel guilty. You're one woman, and because of it you have to make some hard decisions while prioritizing.

Connor pointed out, "For example when a person in a role or a process becomes 'more work than they’re worth,' it’s a sure sign that it’s time to quit the system or process... quit the routine or the process that is repeatedly taking the business or program away from its goal." If the task at hand doesn't do much to move you further along to your goal, it's OK to take it off the to-do list permanently.

4. You Know You Shouldn't Be There

There's that moment where you look around your surroundings and have that startling moment of clarity where you think, "What the hell am I doing here?" Whether it's in your cubicle farm office, your major's lecture room, or during a presentation at work, if you feel in your gut that this isn't the path you should be on, it's completely fine (and super admirable!) to gather up your courage and step off. Just because you found yourself on a certain path doesn't mean you can't change it at any point in time, no matter how abrupt.

O'Shoney shares, "This is that fish-out-of-water feeling. It’s that sensation of looking around the landscape of your office/industry and realizing that not only do you hate your job, but you wouldn’t want anyone else’s either. Not your boss’s job, not someone’s job in a different department – no one’s. When you are discontented professionally, there is always that hope that if you just push a bit harder, you will get to something good. But if you are on the wrong path altogether, then persistence likely won’t make much of a difference." Just remember, this isn't the same as being uncomfortable! Uncomfortable means you just need to work out the kinks yet and find your groove. This fish-out-of-water feeling is more of a realization that this isn't what you want to do with your life.

5. You Were Sticking With It To Save Face

To be labeled a "quitter" is a bad thing, right? It seems to mean you couldn't handle the pressure or you chose wrong. There's a lot of judgement involved when it comes to waving the white flag. But if you're sticking with something not because it inspires you or is working towards your goals, but rather because you want to save face, then you need to re-evaluate.

Jan Bruce, co-founder of meQuilibrium, a coaching system for stress, and writer for Fast Company, explains, "It means admitting you were wrong, or that something you tried isn’t panning out the way you planned. That can be the most difficult thing of all. It takes courage to make this decision. I’d rather quit for the right reasons than keep going for the wrong ones." Don't stick to something just because ending it might scuff your ego a little bit. Your efforts could be pointed elsewhere.

6. The Path That You Were On Wasn't Chosen By You

Sometimes we get gently pushed into things, but it wasn't something we originally wanted. Whether it was our parents telling us to be nurses instead of writers, a partner convincing us to move to a new city, or a job taken because of a running-out bank account, it the path that you're on wasn't of your own doing, it's never a bad thing to tap out when you've had enough.

According to senior lifestyle writer Lauren Martin at Elite Daily, "You’re allowed to run away from dreams that aren’t your own. There’s no shame in backing out of someone else’s plan for you. There’s strength and honesty in that." Once you get the courage to make yourself happy, throw in the towel immediately. Sometimes that bravery doesn't stick around, so do what's best for you once you realize what that is.

7. Quitting Will Help You Stay Ahead

Instead of thinking of the opportunities you're losing by quitting, be proud of the things you haven't done. Because by saying no to those tasks, you're able to say yes to bigger, better things. If quitting something frees up the extra time and brainpower for something that will help you get further ahead in your goals, by all means, wave that white flag.

Bruce pointed out, "A quit opens up energy and resources for whatever new endeavor you have your eye on. Rather than worry about you’re losing by quitting, think about what you’re losing by keeping your hands full of something that’s doing nothing for you or anyone else." When you think about it, you're losing something on both ends: whether you quit or if you stick with it.

By quitting, you're also gaining something: An opportunity to better yourself. I'd say that's worth it, wouldn't you?