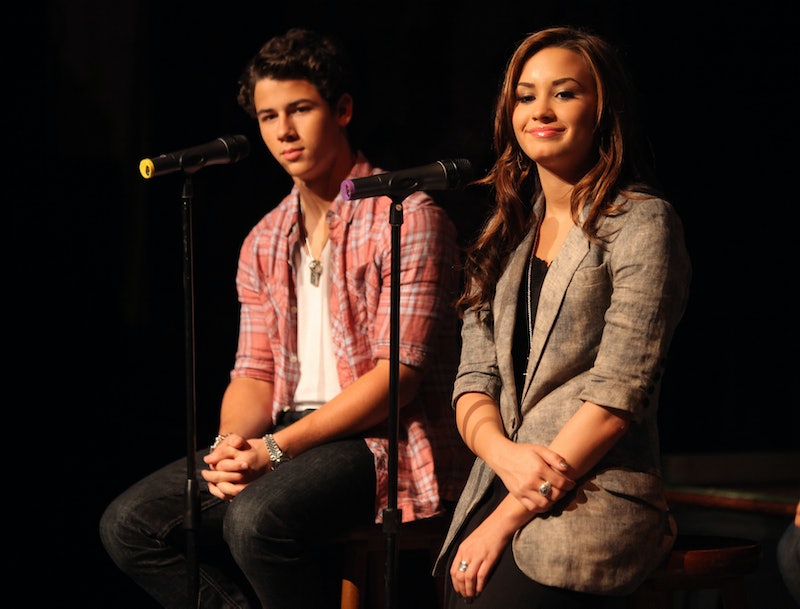 Here's some Monday morning news that'll wake you up faster than a double shot of espresso (or whatever kind of caffeinated beverage the kids are drinking these days): Demi Lovato and Nick Jonas are going on tour together! The longtime besties made the exciting announcement on Oct. 26, revealing that the tour will be called the Future Now tour and will stretch all across North America throughout the summer of 2016. Of course, a dual tour is a logical step for Lovato and Jonas, who have been #BFFGoals ever since those fetus Camp Rock days. The pair — who have frequently collaborated both musically and on the road — are super close and are forever supportive of one another, so it totally makes sense that they're touring together.

"Demi and I were business partners and, obviously, have a long history of being friends, but the chief for us was about living in this moment, taking a step out individually over the last year-and-a-half, two years, and growing with our fans and then saying, you know, if there was ever a time to do it, it's now," Jonas said on Good Morning America about their upcoming tour. "[We're] so excited to get in front of our fans and rally curate the moment each night."

While the world not-so-patiently waits to catch Jonas and Lovato on the road together (tickets go on sale on Nov. 7 and the tour kicks off on June 24, 2016), let's revisit some of their best friendship moments.

1. When They Starred In Camp Rock Together

Fans may not have exactly been focused on Lovato and Jonas' relationship in either of the Camp Rock films — that honor goes to Lovato and Joe Jonas, who were dating both on-screen and off during this time period — but it sparked the beginning of a beautiful and long-lasting friendship between the two.

Remember Jonas' Marky Mark-esque photo shoot for Flaunt magazine? (LOL, like anyone could ever forget.) While Lovato was happy to see her longtime pal looking so physically fit, she wasn't all about that crotch-grabbing life.

"He looks really buff and he looks awesome," she told Access Hollywood at the time. "But he needs to keep that sh*t in his pants. I don't want to see that."

3. When They Collaborated On "Avalanche"

Lovato and Jonas are incredible artists individually, but the way their voices blend together on this track... it's genuine emotion and genuine perfection. Here's hoping that "Avalanche" is a regular on the Future Now setlist.

4. When They Started Their Own Record Label Together

In case you needed any more proof that #Nemi were also music industry goals, the two straight-up started their own record label together, called Safehouse Records.

5. When Nick Was The Creative Director For Demi's Neon Lights Tour

"The fact that she asked me to come in and sort of take her visions and her dreams and turn them into a reality on stage was an honor — and the show looks amazing," Jonas told MTV of the tour. "The show looks amazing and I think this will be the best show she has ever put on for her fans."

6. When Demi Refused To Comment About Those Nick/Selena Dating Rumors

"Listen, if I have an opinion on something I'm gonna say it," the singer said firmly when asked about the #Nelena dating rumors by the U.K.'s Capital FM radio station. "I honestly just don't have an opinion on this. I want him to be happy."

7. When Demi Revealed She Calls Nick For Support

"I feel like, especially with Nick, I feel like I can call him when I'm really struggling or whatever, and he'll be there for me," Lovato told the Huffington Post in 2013. "It’s a really good feeling to have a friend like that."

Not just a friend — but also a collaborator, business partner, and now, tour mate. Bring it on, Future Now tour — Nick Jonas and Demi Lovato are ready!

More like this
Demi Lovato Said Her Dream Music Collaboration Is Hayley Williams
By Grace Wehniainen
Sophie Turner & Joe Jonas’ Fave Taylor Swift Album Is Full Of “Bangers”
By Sam Ramsden
Leona Lewis & Husband Dennis Jauch Welcomed Their First Child
By Darshita Goyal
Who Is Camila Cabello Dating? She's Getting Cozy With Lox Club CEO Austin Kevitch
By Radhika Menon
Get Even More From Bustle — Sign Up For The Newsletter