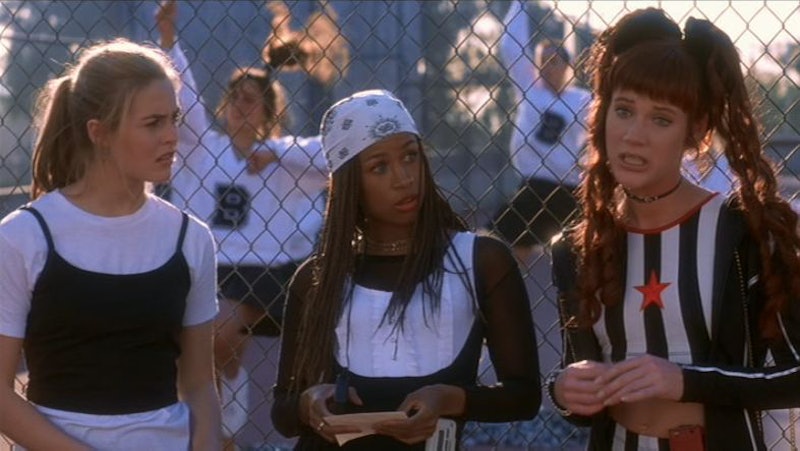 Gotta love the '90s: Age of dial-up, Crystal Pepsi, Jordan Catalano, TOPANGA, and glorious, ridiculous slang. To be honest, my favorite bits of slang as an adolescent in the '90s were not very exciting, consisting primarily of “Not!”, “No doi!”, and “Whatever [with a finger “W,” obviously].” These phrases demonstrated my obvious maturity (Not! Heh.), but beyond these existed a colorful tapestry of '90s jargon, from “Buggin,’” to “Take a chill pill,” to the insult of all insults, “Talk to the hand, ‘cause the face don’t understand.”

As dope as these phrases are, I’m sure you’re all wondering, “But where did they come from?” Because of it’s informal, changeable nature, slang often has unusual origins, and sometimes those origins never are really clear. Below, I’ve laid out how some of the freshest phrases of the '90s came about and what they actually mean. Most of them are probably familiar to you; if you were cooler than I was, they may have been normal parts of your '90s lexicon. Clearly, we need to bring some of these phrases back — because is there any phrase that punctuates an exit quite so well as “I’m Audi 5000”? I think not.

Get jiggy with it.

The Oxford English Dictionary (OED) reports that as early as the late 19th century, “jiggy” was used to mean “jittery” or “fidgety.” It wasn’t until Will Smith’s 1997 hit “Get Jiggy With It” that the term was used to mean “Excitedly energetic or uninhibited, often in a sexual manner.” In a 1998 article for the New York Times, William Safire also delves into the origins of the word "jiggy":

The etymology is uncertain: in From Juba to Jive: A Dictionary of African-American Slang, Clarence Major defines jig as ''a dance'' and jigaboo, from the Bantu for ''slavish,'' as a racist slur aimed at dark-skinned African-Americans. Jiggy could also be related to the verb ''to jiggle.''

All that and a bag of chips.

According to the OED, “all that” was first used to mean “impressive” in 1989. In the mid-'90s, people started using “All that and a bag of chips” to mean “good, plus extra!” The Online Slang Dictionary suggests that the phrase may also be used to announce your superiority over someone who is already “all that.” As in, “You’re all that, but I’m all that AND a bag of chips.” Safire suggests that this phrase is a reference to “fast-food excess,” but if that were the case, wouldn’t it make more sense to say “All that and a side of fries?” (I realize that in the U.K., “a bag of chips” would in fact refer to a bag of fries, but the OED identifies this phrase as specifically American in origin.)

“Phat” was a popular term in the '90s, but the OED traces its origins — to mean “cool” or “excellent” — to 1963. The significance of the word’s spelling has been debated: Some have argued that “Phat,” also used to refer to an attractive woman, stands for “Pretty hot and tempting” or “Pretty hips and thighs,” but Safire suggests that the word’s real source is simply a common misspelling of “fat,” which has for centuries been used to mean “'rich,' as in ‘fat and happy.’”

The phrase “dead presidents” as slang for money (because of the presidents’ faces on paper currency) has been around since the mid-1940s, but it became especially popular in the 1990s. There was even a film released in 1995, called Dead Presidents that uses the term in the title.

The word “bitch” has been used to refer to what the OED describes as “a lewd or sensual woman” for well over six hundred years. But in the '80s and '90s, there was a brief, strange period when “bitchin’” was used to mean “awesome.” The word’s coolness factor surely died when Steve Martin famously used it in 1995’s Father of the Bride II.

The funny thing is that, according to the OED, the term was used all the way back in 1957 in Frederick Kohner’s novel Gidget — the book that would give rise the ultra-wholesome Gidget series of movies. The text includes the passage, “It was a bitchen day too. The sun was out and all that, even though it was near the end of November.”

TLC’s 1999 hit “No Scrubs” gave us all a perfect word to describe a freeloader who thinks he deserves attention:

Although the word “scrub” was huge after that song came out, TLC was actually using a very old term; the Online Etymology Dictionary explains that “scrub” was used to refer to “mean, insignificant fellow” as early as the 1580s.

Saying “I’m Audi 5000” in the '90s meant “I’m leaving ­— fervently!” According to The New Partridge Dictionary of Slang and Unconventional English , the term probably started as a play on the word “outie” (as in “I’m outie/out of here”). When people caught the similarity of “outie” and “Audi,” they continued the car theme and added “5000” for emphasis.

“Psych” had three different meanings in the '90s, all playing on the word “psychological”: There's to “psych out,” meaning to be anxious or intimidated (e.g. “That chem test totally psyched me out!), as well as to “be psyched” or excited about something (e.g. “Dude, I am SO PSYCHED about the Third Eye Blind concert!”). Both of these uses have been around since the early 1960s. A third (and more obnoxious) usage, “Psych!” or “Sike!”, meaning to trick someone, is newer; it’s been in use since 1990.

“Cowabunga!” is an expression of enthusiasm or surprise, the equivalent of saying “Wow!” It was popularized in the '90s by the Teenage Mutant Ninja Turtles and Bart Simpson, but “cowabunga” was invented much earlier. The word — originally spelled “kowabonga” was created by Edward Kean for the kids’ TV show Howdy Doody in 1949. It was a catchphrase for the character of Chief Thunderthud, a cartoonish Native American caricature that was… not racially sensitive (like, AT ALL). “Cowabunga” was picked up by surfers in the 1960s before finally being immortalized by the Ninja Turtles and Bart, both of whom tended to add a “Dude!” at the end.