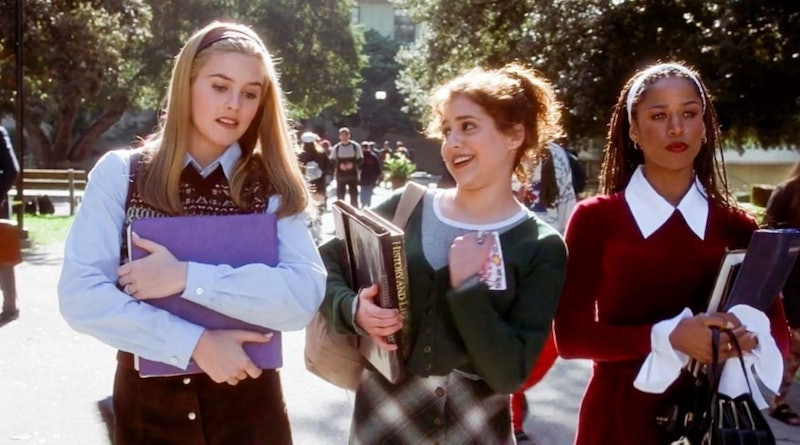 While it's true that slang comes and goes, it also has a tendency to reemerge after a decade or two has passed — which is why it shouldn't be surprising that many champion the idea of bringing back '90s slang words. And they have a point. Sometimes, the only way you can express your elation is with a good ol' fashioned "booyah," you know?

Slang is by nature closely tied to the era in which it proliferates. It's often a reflection of or a reaction to what's going on the world, whether it's a cultural moment (like Clueless) or an overarching attitude of a particular generation (for example, the idea of not only letting kids be kids, but actively encouraging it, as seen in Nickelodeon's network philosophy). As such, I have a two-part theory about why slang terms sometimes return later on. It might be the result of people who came of age during that generation reconnecting with the nostalgia of their youth, or it might be the result of later generations discovering an essential element of a previous generation, connecting with it themselves, and adopting it as part of their current zeitgeist. Like any other decade, the '90s had their issues. However, they also had a lot to recommend about themselves, thanks to things like the economic boom and the national treasure that is Topanga Lawrence.

So here, have a list of '90s slang words that might be worth considering bringing back. Because they're all that and a bag of ... well, you know how it goes.

Definition: An expression of great joy.

Fun fact: I actually do know somehow who still uses this phrase — but perhaps even more impressive is the fact that he uses it unironically. No, I don't know how he does it, either. It's a gift, apparently.

Definition: An expression of affirmation or agreement. A truncated version of the phrase “Word up, yo.”

Another fun fact: I still use this one. Unlike my booyah-happy pal, though, my usage is almost always ironic. I am not hip. Slang does not sound comfortable coming out of my mouth. Poking fun at myself for using it is the only way I can actually get away with using it in the first place.

Definition: “What's the relevant information?” Also the debut album of Mary J. Blige, released in 1992. From the telephone number for local directory assistance.

Does it freak anyone else out that a lot of today's youths probably have no idea what "411" even is? Such is the nature of living in the age of smartphones and the Internet.

Definition: “My apologies; I have made a mistake.”

I also still use this one. It remains in my mind the perfect way both to admit you messed up and to apologize for your gaffe within casual settings.

Definition: “The best and then some.”

I mean, hey, All That is currently having a renaissance thanks to The Splat, so we may as well bring back “all that and a bag of chips” while we're at it, right?

Definition: An expression indicating a reversal of a previous statement.

“Psych” is kind of tricky, and I actually think that if we bring it back, it needs to be with a caveat. Traditionally, it's been used somewhat mean-spiritedly. Furthermore, it gets even worse when the party against whom the mean-spirited trick was lobbed objects or expresses hurt. Then it's often followed up with, “Can't you take a joke?” Here's the thing, though: Calling a hurtful action a “joke” does not prevent it from being a jerk move. So if we're going to bring back “psych,” I think it needs to be used for gentle ribbing or good-natured jokes — not as an excuse for asshole behavior.

Definition: Multipurpose exclamation that may express anything from dismay or disbelief to surprise or joy.

These days, I think we mostly use “ey-oooo!” instead. “Oh, snap” or just “snap” are a little more economical, though. Because efficiency is key. Or … something.

I suspect that this one will be best used ironically. Maybe that's just me and my un-fly-ness talking, though.

Definition: “I'm not listening,” “Please leave me alone,” etc. May also be expressed simply by putting up one's hand in a motion indicating “STOP.”

Generally, this one is an expression of contempt. As such, think carefully before you deploy it.

Definition: An expression of rebellion, typically against an authority figure.

There's a Bart-Simpson-ism for every occasion. Is telling someone to ingest your underwear immature? Of course. Is it still a bizarrely hilarious insult? Heck yes.

11. Anything Popularized By Clueless

If I had to pick one movie that absolutely epitomized the '90s, it would be Clueless. “As if,” “Whatever!” and all the accompanying hand motions were cemented as part of our cultural lexicon when the movie was released in 1995, and they will only leave it when someone pries them from our cold, dead dictionaries.